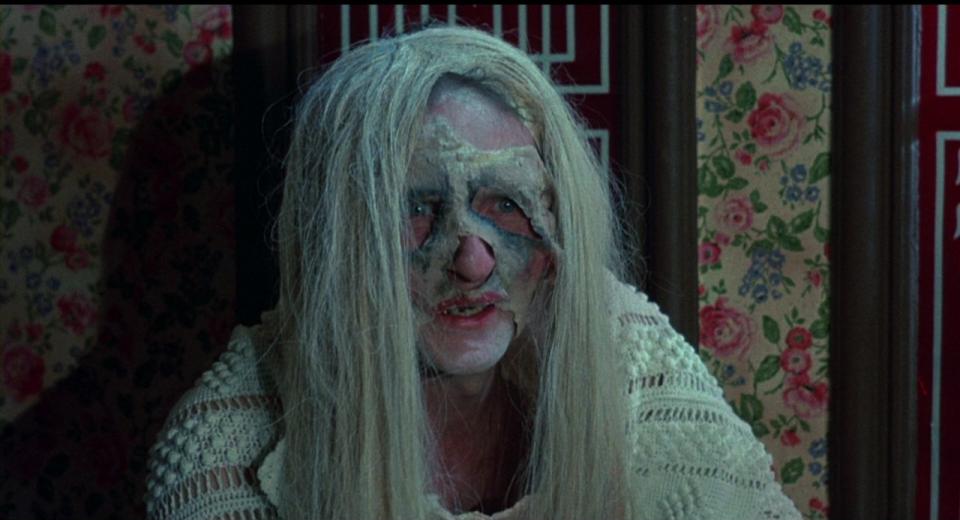 Arrow’s Region B transfer is encoded via AVC and came from a 35mm interpositive, and presents the film 1.85:1.

Straight up, there is some edge enhancement to the exterior shots, with autumnal trees and scruffy ridges, fences, outbuildings and people looking sharpened and haloed. Is this too detrimental? I wouldn’t say so, and the majority of the film looks just fine, with edges much smoother and more natural during the more extensive interiors.

There is no banding that I noticed and no aliasing to further mar the digital front. Grain is intact and looks just fine to me. No veering into noise and no unsightly attempts at digital eradication means that the print texture remains consistent and pleasing. Print damage is in evidence, but this really is slight and won’t present any distractions. There are little pops and nicks, and we see colour and contrast fluctuations on occasion. The image, itself, is very crisp and clear. Very detailed. Close-ups can look extremely well-defined and revealing. There are some well-realised skin textures and eyes, some impressive levels of material weave evident on clothing. Middle-distance material is also cleanly rendered and not subject to much softening-up or blurring. Backgrounds, particularly the further end of the hunting store with all of its products and set-decor, or the deeper recesses of the woods, are also pretty keenly presented. Depth of field is actually quite impressive. There’s no reason why it shouldn’t be, of course, but the natural tendency with such low-budget, shot-on-the-hoof material is to assume it will look appropriately scratchy and poor. Although some considerations are made, Deranged looks neither.

Savini’s makeup effects for the dead bodies and especially their rotten faces is all very primitive, and this transfer will be quick to point all this out. The pasty clay is clearly delineated, the various levels of the skull construction also plain to see. The mottling of the decaying flesh is all a bit haphazard. But, as far as I am concerned, this only adds to the fun of this film. The brain-scooping and the eye-ball plopping is still supremely icky, though.

Colours remain faithful to the frequently muted palette that was intended. But skin-tones look spot-on with regards to the photography, lighting and makeup. Micki Moore, in particular, has very tanned skin, and she definitely does stand out from the otherwise convincingly pale, or weathered visages that predominate. Clothes and locations are earthy and drab, except for Ezra’s clichéd checked jacket whose reds definitely pop. And speaking of popping reds - blood is of that melted crayola hue that Savini absolutely abhors yet was stuck with on these early films up to and including Dawn of the Dead, but still shines with gaudy vitality from the screen. It doesn’t look at all realistic, I’m afraid. But this overly red/almost orange splatter is all part and parcel of early Savini gore effects. It had its zeitgeist in Dawn, and we all accept that. So there shouldn’t be any problems with it here, either. Yes, it looks wrong. But the transfer hasn’t played any part in that. One of the most unpleasant sights is of the pea-soup and the blood mingling as Ezra attempts to spoon the entire mixture back into his dead mum’s mouth. The colours, here, are almost gleefully comic-book. Put it this way, the projectile vomit in The Exorcist pales in comparison.

Blacks are satisfyingly deep. Contrast keeps up, and allows the sudden instances of grue to shine amidst the dismal, bleak settings. Overall, I don’t think there is much to complain about. The picture, like the film, is rough and ready, but I sincerely doubt that it has ever looked quite as clean or as detailed as this. Fans will know what to expect from this … and the transfer should definitely please them. “After that, Ezra made many visits to the graveyard, bringing home bodies. Or parts of bodies. To keep his mother and himself company.

Deranged has a PCM 2.0 track taken from the restored 35mm mono magnetic. About the most that can be said for it is that it is probably quite faithful to the source. Well, I’m assuming that. The film couldn’t possibly have had an audacious sound design, and this mix is appropriately low, somewhat dirty, a touch muted and crackly. But it still sounds perfectly fine by the standards you expect from such fare.

Dialogue can be a little bit haphazard, but then this is down to the original mix. There isn’t any problems hearing any of it, but there is nothing razor-sharp or nuanced about the voices. Screams aren’t exactly detailed and are quite brutally shrill, but Ma Cobb’s voice is a skin-crawling bellow of spite when it becomes ghostly. Bass isn’t called upon to do much, but the various impacts that we hear – there are gunshots (which are muffled by a pillow), a clamping bear-trap, and some sundry wallops with various implements, like a bone-club – manage to convey the weight of what’s occurred reasonably well without sounding embellished.

Details like the slurping of sloppy brains, or the slicing of a girl’s strung-up carcass have some degree of presence, as does the rattling of pots and pans. The music score from Carl Zittrer, with its church organ passages, comes over well. The whole thing sounds old, yet somehow still quite potent, with that understandably lethargic low-rent and naturalistic vitality that reminds you of old picture-houses with the mix all messed-up and slightly warbling.

Which all sounds authentic to me. Nothing silly added to the mix. The release features a reversible sleeve with original artwork on one side and a customized version on the other. There is also a good 40-page illustrated booklet with critical writings from Stephen Thrower and Derek Nieto, as well as an interview with producer Bob Clark. All good stuff and well worth your time and effort to delve into.

There is also a superb commentary that this UK disc has to commend it. Recovering from the awkward time he spent with director Robert Silverstein during their chat over The Car, Calum Waddell now has much better experience with the ever-chatty, always amicable, anecdote-soaked Tom Savini. A terrific raconteur and a proper hands-on pro when it comes to providing fans with what they want, Savini is on fine form. Both get along very well, and this comes across and makes for a very enjoyable time in their company.

As I’ve mentioned already, these two somehow miss the appearance of the blood-tube even though they are actually looking for it, and Savini does tend to forget dates and chronology, and tends to get a little sidetracked, but this is great stuff. Personally, I could listen to Savini prattle on about almost anything and never get bored, but when he’s discussing gore, violence, ladies and genre movies, he is unbeatable. Down to earth yet innately knowledgeable and informative, he talks about his early days working in theatre, his combat photography, his career and his up and coming projects. Of particular interest are his opinions on Mad Mel’s The Passion of the Christ, and he even has to bite his tongue so as not to spill any gossip on Machete Kills, in which he co-stars with Gibbo. He insinuates that he has not seen this uncut version, but he has discussed it in great depth in some interviews in both regular magazines and specialist publications, such as Savina – Wizard of Gore. There is some controversy surrounding the age of Ezra’s final victim, who gets strung up, nude in a barn, and gutted. Savini is convinced that she was very young, maybe 15 or 16. Waddell seems to understand a bit better that this would have been totally illegal, given the nudity involved, even in Canada, where it was filmed, and steers Tom back towards a more legal age. To be honest, even though looks can be deceptive, she does look around 18.

Savini also supplies one of those rather useless nano-second intros to the main feature, as well.

In A Blossoming Brilliance, producer Scott Spiegel (the Hostel series, Evil Dead II) talks about the talent of Deranged star Roberts Blossom, and about the enduring power of this devious little treasure of the genre. Weirdly, Spiegel looks like Savini but with more unkempt hair, and without the beard. This lasts for ten minutes, and is a fine piece of fan-boy adulation, except that Spiegel actually worked with Blossom on Raimi’s The Quick and The Dead. This is good fun, with Spiegel lively, amusing and full of great little stories. He has a great overview for the genre and the people involved in making these films, and his passion is a joy to behold. I love the doll of Tippi Hedren from The Birds on the shelf behind him. I’m getting one.

Ed Gein: From Murderer to Movies is an unusual little feature that takes a look at the true Wisconsin killer, his deeds, his madness and the pop cultural reaction to it all in the movies. Interestingly, the key contributor to this is the guy who played Human Centipede II’s resident wacko, Laurence R. Harvey. A keen experimental actor, Harvey has a particular fascination for serial killers and especially Gein. He offers up some opinion about how such characters are depicted in genre, and how they should, or shouldn’t be treated in reality. Personally, I can’t help thinking that this was just a stunt featurette, although it is a morbidly engrossing topic.

There is some making-of production footage and an interview with co-director Jeff Gillen that has been transferred from 16mm in The Wages of Sin. This lasts for 12 minutes and shows how some of the gore-gags were achieved, including the brain-scooping and the pea-souper. Good vintage fare and pretty unusual for a grungy independent film like this.

Rounding Deranged’s supplements, we have an Original Trailer for the film, as well as a Trailers from Hell variant with a commentary, and a Stills Gallery. Another genre gem is unleashed from Arrow Video. They just keep churning them out.

Deranged is a great little horror film. It is suitably grisly, grim and grungy and its depiction of the Ed Gein story is a cleverly eerie and frequently creepy one. Lacking the flamboyance of Texas Chainsaw Massacre, this is, nevertheless, an insidious slice of redneck depravity that boasts a barnstorming central performance from Roberts Blossom, who effortlessly combines poignancy with insanity, primitive but fun special makeup effects from Tom Savini, and a gritty, low-budget independent aura of going against the grain. It is the sort of film that makes you feel a little bit scummy afterwards, but it is a backwoods trip that is still very much worth taking.

The video transfer is very good. Some early edge enhancement and the signs of age, notwithstanding, this is detailed and looks very film-like. It’s got a grungy zest that should appeal to vintage Grindhouse fans, who will not have seen it look so vivid on home video before now.

The extras are good fun too. Tom Savini is always great value and he delivers some terrific anecdotes in his excitable commentary. I’m never too fussed on the split-second intros or the trailers from hell, but the featurettes here are worthwhile and entertaining, making Deranged another jaded and bloody feather in Arrow’s cap.

It’s made for those with jaded palettes … but I still wouldn’t hesitate in recommending Deranged.