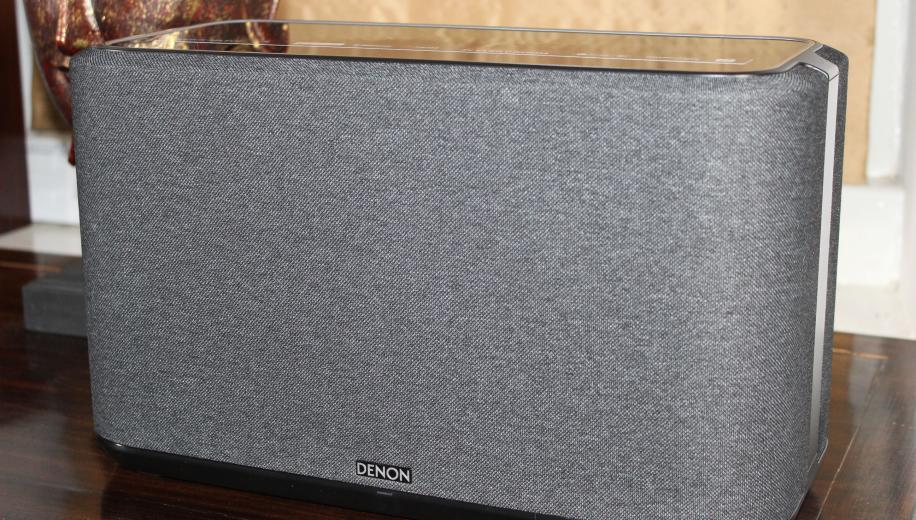 The Denon Home 350 is the company's latest wireless speaker, and heads up a new range that includes the entry-level Home 150 (£219) and mid-range Home 250 (£449). All three include Denon’s HEOS multi-room system, along with built-in Wi-Fi, Bluetooth and AirPlay 2, plus the ability to work with Amazon Alexa or Google Assistant.

As with all the speakers in the HEOS range, the Home 350 can be used on its own, as part of a stereo pair, or even on surround duties in a 5.1-channel system with a Denon DHT-S516H soundbar and subwoofer. It also boasts a sizeable cabinet that houses a pair of high-quality speakers and powerful amplification.

The Home 350 sports a price tag commensurate with its high-end status, and at the time of writing (September 2020) will set you back £599. That's not exactly cheap, and the wireless speaker market is overflowing with with choice, so Denon's new flagship will need to deliver if it wants to stand out in a competitive crowd.

The Denon Home 350 looks fairly boring, with a simple box, a wrap-around fabric grille, and a choice of black or white finishes. However, the build quality is excellent, there's a toughened glass top that adds a touch of class, and a status light under the Denon logo at the front.

The elegant glass top houses touch sensitive controls that illuminate when your hand approaches them thanks to a groovy proximity sensor. These controls are fairly basic and consist of play/pause, volume up/down, and six presets for your favourite radio stations.

The Denon Home 350 is all about its wireless connections, with built-in Wi-Fi that supports 2.4 and 5GHz, Bluetooth and Apple AirPlay 2. On the physical side of things there’s an Ethernet port at the rear, along with a 3.5mm stereo analogue jack and a USB port for external storage devices, but there’s no headphone socket. There are also buttons for connecting the 350 to other HEOS devices and pairing the speaker with Bluetooth sources.

Aside from the touch sensitive controls on the Home 350 itself, the main method of interaction is the HEOS remote app. This allows users to quickly and easily access their wireless network and create a multiroom system. It allows them to enjoy the same or different music in multiple rooms, and even group two HEOS speakers together as the left and right channels of a stereo pair.

The HEOS app is a well designed and effective interface, with all the main music streaming services embedded

The HEOS remote app also provides direct control over streaming music services like TIDAL, Amazon Music, Pandora, Deezer, Spotify, TuneIn, and Soundcloud. Crucially, these services are embedded within the app, so users can carry on streaming music without their smartphone being constantly tethered to the Home 350.

Denon's HEOS multi-room system is well-designed and effective, creating a network that’s robust and responsive. There’s no discernible delay when using it, the synchronisation is excellent, and the control and operation is flawless. It also allows users to tweak the setup, seamlessly play back content, create groups, pair two speakers or add them as surround channels to a HEOS soundbar.

The Denon Home 350 might be a wireless speaker, but it boasts some impressive drivers inside, with each speaker composed of a ¾-inch tweeter and a 2-inch midrange driver. There's a pair of 6-inch woofers for the low-end, one firing forwards and one firing backwards in a push-push configuration. There are six Class D digital amplifiers to power each of these drivers, although Denon is tight-lipped about the actual amount of power and how it's allocated.

The Home 350 forms part of Denon’s range of HEOS products, allowing it to create a comprehensive multi-room system in conjunction with other speakers, soundbars and AV receivers. You can combine two 350s as a stereo pair, or even use these two speakers as pair of seriously over-specified rears in a 5.1-channel system based around a Denon soundbar.

The Home 350's high quality components are combined with a superior DAC that allows gapless playback of high-resolution audio up to 192kHz/24-bit files in FLAC, WAV, ALAC, and DSD 2.8/5.6MHz formats. You can do this via a network or using the rear USB port, and the Denon is also Roon Ready if that’s something you're invested in.

The Home 350 currently works with Amazon Alexa and Google Assistant, which requires a separate external device. This allows you to access a smart assistant, and provides limited voice control. Denon plans a future firmware update which will engage the two microphones on the top panel, allowing full voice interaction without the need for a third-party device.

The Denon Home 350 delivers the sonic goods right out of the gate, with a big and spacious delivery. Those 6-inch woofers generate a surprising amount of bass, and this speaker certainly has enough power to handle the largest of living rooms. If anything, it can be a bit too powerful, so you might need to rein the bass in somewhat, and you should probably avoid putting this speaker in a corner. However, take a little time setting the Denon up and you'll be rewarded with a great performance.

Since the 350 supports high-resolution audio, it seemed obvious to start with my 24-bit/96kHz file of Pink Floyd’s The Division Bell. The speaker delivered the album's textural soundscapes with precision, thanks to a clear mid-range and high frequencies that were free of any harshness. The flawless production is reproduced in detail, while those 6-inch woofers generate a low-end extension that's genuinely impressive. As a result, the percussion has a pleasing amount of impact and depth.

In fact, this wireless speaker is something of a bass monster, and its ability to produce low frequencies is particularly noticeable when listening to The Greatest Showman soundtrack. The opening track makes extensive use of bass, and the Home 350 gives the drum hits and stomping feet plenty of impact. While it's fair to say the Denon isn't exactly small, it still manages to create an overall soundstage that sounds much bigger than you’d expect from a single speaker.

This is an accomplished performer, with a clean and detailed delivery, a pleasing sense of fun, and plenty of bass

The soundstage created by the 350 is so expansive that one can only imagine what two of these speakers acting as a stereo pair would sound like. The Denon certainly retains that all-important sense of fun, and an uptempo number like This is Me﻿ benefits from a lively delivery that imbues the track with a feeling of triumphant joy. However, the speaker remains controlled, ensuring individual instruments and voices are distinctive, while the the overall tonal balance remains cohesive.

While the bass is powerful, it crosses over seamlessly with the midrange, ensuring a solid low-end foundation that doesn't dominate the middle frequencies. This sense of tonal balance and composure extends to the higher registers, and this is particularly noticeable during the song Never Enough. This song is largely composed of female vocals and strings, but the Home 350 ensures the song never sounds strained or sibilant.

The HEOS remote app proves highly effective as a control interface, allowing easy access to streaming services such as Spotify and Tidal. In addition, the Home 350 proves equally as adept with more compressed content, making it a great all-rounder. It also boasts an impressive dynamic range, instantly going from near silence to uncomfortably loud. While the exact amplification may be unknown, there's no denying it can go very loud without distorting.

The Denon Home 350 is an excellent wireless speaker that covers all the bases when it comes to key features. It's not small or cheap, but it's well-made and boasts high quality components and decent levels of power. It can handle larger rooms with ease, and produces a defined and detailed delivery. It's easy to setup and control, offers all the main music streaming services, works with Alexa and Google Assistant, and includes Bluetooth and AirPlay 2 (although not Chromecast).

The Home 350 also generates some seriously loaded bass, which is welcome but can be a little overwhelming, so avoid putting it in corners. If you're already invested in Denon's HEOS multi-room system it makes for an obvious choice, but even if you're not, this wireless speaker is still worth considering. It sounds excellent and offers plenty of features, making the Denon Home 350 an accomplished speaker that comes highly recommended.

The Denon Home 350 is up against a number of higher-end wireless speakers, many of which offer similar specs and features. However, the obvious alternative is the Harman Kardon Citation 500, which looks familiar and has a comparable price tag. It’s equally as well-specified – producing a big and powerful soundstage, combined with a detailed and refined delivery. Overall, it's a fantastic performer that sounds great regardless of your musical tastes.