If music is more important than movies, this might be the soundbar for you 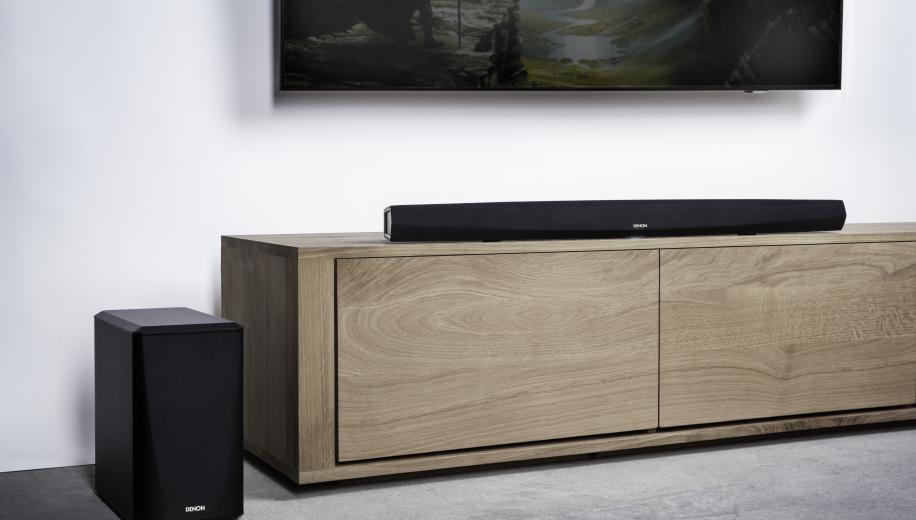 The Denon DHT-S516H soundbar is the latest addition to the company's range of products that support its HEOS multi-room system. The S516H only has two channels, but comes with a wireless subwoofer for deeper bass. It also works with Amazon Alexa and Google Assistant, making it smarter than previous models.

Denon has taken a similar approach to Bowers & Wilkins, concentrating on sound quality rather than immersive audio. That means no decoding for Dolby Atmos or DTS:X, although at least the Denon includes HDMI connections. The S516H also supports AirPlay 2, but like the Formation Bar there's no remote control or lossless audio support.

The Denon DHT-S516H is also cheaper than its B&W competitor, setting you back £599 as at the time of writing (May 2020). However, this is a competitive segment of the soundbar market, and the S516H looks under-specified compared to other models. As a result, it really needs to deliver in terms of sound quality if it wants to stand out from the crowd.

The Denon DHT-S516H sports an attractive design that uses elegant curves and sleek styling. The soundbar itself is finished in matte black, and has an angled black fabric grille at the front that can't be removed. The build quality is very good and the soundbar feels solid, weighing in at 3.1kg. There are dark silver end plates, with basic controls for volume up/down and mute on the right hand end plate.

The soundbar measures 1018 x 73 x 104mm (WxHxD), making it ideal for today’s larger screen sizes, and the height shouldn’t block the screen if positioned in front of a TV. There are optional raiser feet, if needed to place the soundbar over a stand, and the S516H can be wall mounted using slots at the rear, bumper pads and an included template.

On the inside of the soundbar are left and right speakers, powered by digital amplification. The included wireless subwoofer also has built-in amplification, delivering the low-end frequencies. This rear-ported, downward-firing sub is styled to match the soundbar, and comes with optional non-skid pads. It measures 17.2 x 31.1 x 17.2cm (WxHxD) and weighs 6.6kg.

The Denon DHT-S516H houses its connections in two recesses at the rear. The first contains an HDMI input and output with ARC, allowing you to send audio from the TV back to the soundbar. These HDMI ports can handle 4K, HDR (including Dolby Vision which we tested, although we couldn't check for HDR10+) and HDCP 2.2, and while there's no support for eARC that's not an issue given the S516H only decodes lossy formats.

One HDMI input might seem limiting, but if your TV supports ARC (and most do these days) you can connect other HDMI sources to your TV, and then send the audio back via ARC. The second recess has an optical digital input, a 3.5mm jack, a USB port and an Ethernet connector, although there’s also Wi-Fi, Bluetooth and AirPlay 2.

Annoyingly the S516H doesn't come with a dedicated remote control

Annoyingly the S516H doesn’t come with a dedicated remote control, and nor does it have a proper display, other than a light at the bottom centre of the soundbar. So you really need to use the HEOS app as a controller because it provides all the necessary info, but if you’ve connected the soundbar to your TV via HDMI-ARC, you can also use the TV remote for basic control like volume.

The Denon DHT-S516H is a 2.1-channel system based around a soundbar with two speakers built-in, each composed of a 5-inch full range driver and a soft-dome tweeter. Denon hasn't publicly disclosed the built-in amplification of the soundbar or the rear-ported subwoofer, but the latter uses a downward-firing 5.25-inch driver.

The S516H decodes lossy Dolby Digital, Dolby Digital Plus and DTS. If you want lossless decoding of Dolby TrueHD and DTS-HD Master Audio, you’ll need to choose the 3.0-channel Denon DHT-S716H instead. However, neither soundbar supports immersive audio formats like Dolby Atmos or DTS:X, but there are pre-set EQ modes for movie, music and night time listening.

The S516H supports Denon’s HEOS multi-room system, allowing you to stream music wirelessly to all compatible devices. The system is based around the well-designed and intuitive HEOS app (iOS and Android), which allows you to setup and control the soundbar, as well as play music in different rooms and on different devices thanks to the HEOS system. If you have two extra HEOS speakers, you can also use the technology to add them to the soundbar as wireless surround channels.

The soundbar is restricted to lossy surround sound formats

Related: Audio Formats: What Does What and What It All Means

When it comes to smart assistants the S516H is agnostic, and can work with both Amazon Alexa and Google Assistant. You can go hands-free, and control the soundbar using your voice to adjust the volume, play, pause or skip to the next track. In addition, the inclusion of AirPlay 2 not only allows you to stream music from other AirPlay compatible devices, but also provides access to Siri.

Setting up the S516H is fairly straight forward, and all you really need to do is decide whether or not to wall mount the soundbar and where to position the subwoofer. In the box Denon includes an IR blaster, which might come in useful, along with an HDMI cable, an optical digital cable, a 3.5mm analogue cable, and an Ethernet cable.

The Denon DHT-S516H benefits from an expansive front soundstage that spreads out on either side of the screen. The two-channel nature of the design lends itself to music, and the stereo imaging is impressive, with plenty of width and some precise localisation of instruments and effects. Denon is surprisingly tight-lipped about the amplification in the soundbar, but thanks to a decent pair of speakers it can go loud without distorting or becoming strained.

The subwoofer is equally powerful, although again Denon hasn’t made public the amount of built-in amplification. The sub produces a solid low frequency foundation, and the bass is nicely integrated with the soundbar, resulting in a system that feels balanced and cohesive. Despite the lack of a centre speaker, dialogue remains focused and clear and, as a result, the Denon proves just as effective with TV and movies as it does with music.

The musicality of the S516H is clearly deliberate, allowing it to make full use of its support for the HEOS multi-room system. The results are genuinely impressive, and listening to the La La Land soundtrack the Denon produces a detailed soundstage with a clean mid-range and a treble that’s free of harshness or congestion. The vocals, whether male or female, retain a pleasing clarity, while the jazz-influenced drums sound tight and responsive thanks to the subwoofer's well-timed bass.

The Music preset works particularly well with two-channel content, but it also proves effective when it comes to watching TV shows. The mode ensures an overall delivery that's balanced, well-defined and clear, and for most programmes the Denon handles the audio with an accomplished reproduction of the source audio. For example, when watching Masterchef, the soundbar renders the voice-overs with clarity, music with accuracy, and effects with precision.

The S516H is less impressive with multi-channel soundtracks, where the lack of rear speakers results in a soundstage that's obviously focused at the front of the room. A film like Le Mans ’66, boasts extensive racing scenes, but they lose some of their impact without rear speakers. The action spreads out from left to right, but never front to back, so there's no sense of envelopment. On the plus side, the score sounds great and dialogue remains clear and anchored to the screen.

The subwoofer also does a great job of giving the car engines a throaty roar during the titular race. The Movie mode tends to boost the bass, rather than add envelopment, and as such the Music mode feels more balanced and thus better suited to the soundbars’s strengths. The lossy nature of the surround audio didn't appear to adversely affect the performance, but in a soundbar at this price point lossless decoding should be standard, and ideally immersive audio support as well.

The Denon DHT-S516H is a well-engineered soundbar that produces an impressive overall performance. The speakers and amplification create an expansive front soundstage that benefits from deep and well-integrated bass, thanks to the wireless subwoofer. The sound quality is excellent, with a detailed and accurate stereo image, a solid mid range, and nicely defined top end.

The two-channel nature of the S516H obviously lends itself to music, but also handles TV and movies well – primarily due to Denon concentrating on getting the basics right. Dialogue remains clear despite the lack of a centre speaker, but the limitations of a 2.1-channel system result in surround soundtracks losing much of their impact.

The soundbar itself is well-made, and the inclusion of HEOS support will prove useful if you're already invested in Denon's multi-room eco-system. The ability to work with the Alexa and Google smart assistants is a nice feature to have, but the lack of a dedicated remote control is annoying, and the absence of Dolby Atmos and DTS:X is disappointing at this price.

The Denon DHT-S516H remains an excellent 2.1-channel soundbar, and if music and HEOS are important to you then it certainly comes recommended. However, those more interested in movies will find there are plenty of comparably-priced and better alternatives.

The obvious choice is the VIZIO SB36512-F6, which costs the same but offers a complete Dolby Atmos surround system in one accessible package. There’s a wireless sub, wired rear speakers, and upward-firing drivers for overhead effects. The only disappointment is the lack of DTS:X, but otherwise the SB36512 is hard to fault and offers remarkable value for money.

If you want support for Dolby Atmos and DTS:X, then look no further than the LG SL8YG. This particular soundbar supports both immersive audio formats, and if purchased in conjunction with LG’s own SPK8-S wireless rear speaker package, you’ll have a superior system for around the same price. You also get Google Assistant built-in, making this soundbar a fully-functioning smart speaker.