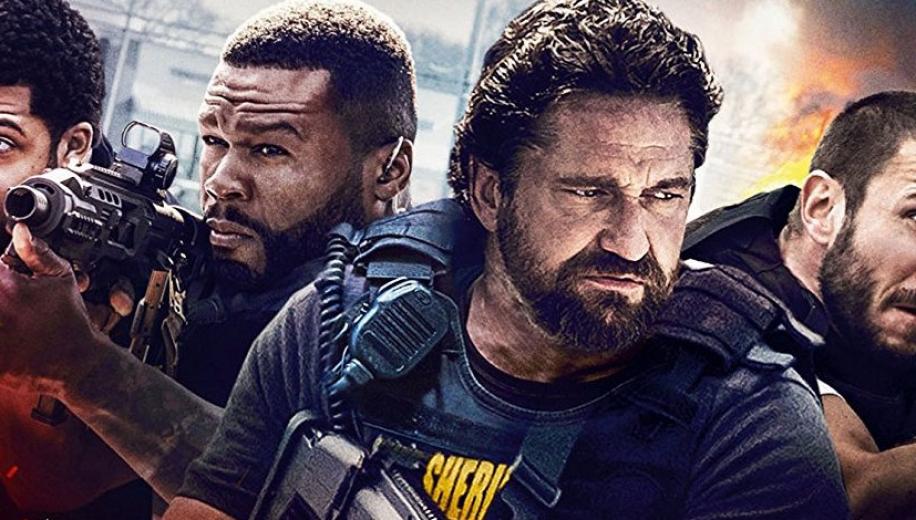 Although it has a LOT in common with the vastly superior Heat, the Gerard Butler-led Den of Thieves is actually an engaging little cops and robbers thriller in its own right.

Taking its cues from the genre-defining Robert DeNiro/Al Pacino-starring Michael Mann masterpiece, Den of Thieves spends a little bit too long walking in the footsteps of its big brother before it decides to choose its own path, eventually forging a familiar but still just about distinctive enough new entry in the already burgeoning genre.

The opening scene is ripped straight from Heat, and it's a while until we get into the meat of the two opposing teams - Gerard Butler's unsurprisingly rule-breaking LA Sheriff who runs a tough team called The Regulators, who are hot on the trail of Pablo Schreiber's (Orange is the New Black) Outlaws, a group of robbers who got trigger happy and popped a security guard in their latest robbery-turned-shootout. The team of bank robbers are running out of time, looking to pull off that last big score before the net closes in on them. So far so familiar, but things do get better.

Director Christian Gudegast makes his directorial debut here with Den of Thieves and it's actually a solid effort, occasionally impressive even, particularly given his background in screenwriting a couple of less than celebrated features - the muddled Vin Diesel cop thriller A Man Apart and the almost universally derided Gerard Butler sequel London Has Fallen, which lost almost all of the slick shark-like efficiency of the throwback actioner Olympus Has Fallen.


Don't quite write it off as Heat-lite, it's more than that and worth checking out

Gudegast still has a lot to learn, and his debut is weakest in the editing department, seemingly running at a bloated 140 minutes just because Heat was also a long film, with plenty of sub-plots that could have been trimmed or even cut entirely. He's got a game cast though, headlined by an on-form Gerard Butler (think: 300's Leonidas with a badge and gun) facing a suitably strong antagonist in Schreiber. It's possibly also the only film that 50 Cent hasn't brought down too.

Cliff Martinez (Drive, Only God Forgives, Neon Demon, Solaris) delivers a memorable score, and the cinematography is on-point too, with Gudegast revelling in crafting a couple of very effective action sequences, replete with impressive military tactics and tense standoffs. Indeed it's only really the editing that is a cause of concern, with the film bookended by tension-setting scenes but dragged down by a flabby middle.

Despite walking in the shadow of Heat - and borrowing a lot too much from it - Den of Thieves is a surprisingly effective little cops-and-robbers thriller which is certainly more accomplished than the flawed John 'Lawless' Hillcoat heist thriller Triple 9. Don't quite write it off as Heat-lite, it's actually, unexpectedly, a little bit more than that, and worth checking out.

Digitally shot, the image delivers clarity and precision but still trades in a suitably filmic layer of overlayed grain which creates a richly textured backdrop for the film to play out against. It's a shame that there's no sign of a Den of Thieves 4K Ultra HD Blu-ray release (yet) but this is still a very good presentation.

Shot in moody saturated LA-orange tones, it's a deceptively stylised picture - deceptively in that it never feels artificially tweaked despite the fact that it patently is, with the warmer sun drenched exteriors seemingly just as natural as the blue-tinged bank interiors.

Black levels are strong and deep, with excellent shadow detail, and no signs of either banding or crush, even as popping primary police lights spin up through the night. It's a great video presentation, demo quality and just shy of reference excellence.

The UK Blu-ray release of Den of Thieves affords it a bombastic DTS-HD Master Audio 5.1 track which may not be a 3D immersive audio track but is top tier nonetheless, close to the best that the format can offer.

Delivering strong prioritisation of the dialogue across the frontal array, dominating the maelstrom even when things kick off, the track really comes into its own through exceptional sound staging for the action sequences and impressive backup from Cliff Martinez's unsurprisingly strong score.


The track is top tier, close to the best that the format can offer

Whilst the action scenes provide the high point, establishing the track's credentials as a serious ballistic, bombastic player, there's more than enough atmosphere generated even in the quieter, more tense sequences. It gives life to the counting machines, the vaults, the security patrols and bustling streets and bars. Of course it's when the cops arrive and mags are emptied that the track really ignites your living room, perforating your walls and slinging hot lead across the array.

With plenty of impressive surround usage and some guttural LFE impact offering support, and with the score keeping the surrounds fuelled at all times, the track remains demo and reference through and through.

Den of Thieves falls down in the extras department, and that's not because Sony's UK Blu-ray doesn't sport some solid supplemental material - it does - but because of what it's missing over Universal's US Blu-ray release.


The trouble is that it's missing both cuts of the film

Sony's UK Blu-ray release of Den of Thieves has an extras package headlined by an Audio Commentary from the Director and Producer, with a trio of extremely short but still nice little Featurettes looking at the cast and characters in Alpha Males, the story in Into the Den, and the shootout in Alameda Corridor. The trouble is that it's missing both cuts of the film, and the half an hour of additional footage in the extras department, which are available on the Region Free US release. Den of Thieves as a surprisingly effective little heist thriller, whose characters and setpieces just about distinguish it from the big boys on this over-populated playing field (Heat).


If you end up enjoying Den of Thieves, you're going to want the complete package, and this isn't it

Sony's UK Blu-ray release of Den of Thieves affords it excellent video and audio as a well as a decent enough selection of extras, but is fatally wounded by the lack of the additional, longer, cut. Universal's also Region Free US release sports two cuts of the movie and half an hour of additional footage including an Alternate Ending. Whilst, without direct comparison, it's impossible to comment on the benefits of the longer cut (which is 148 minutes against the theatrical cut's 140 minutes), and whilst it may well be that the already bloated runtime is not particularly serviced by being even longer, there's no denying that the lack of even the option is a fatal flaw on Sony's UK package.

Ultimately, if you end up enjoying Den of Thieves, you're going to want the complete package, and this isn't it. That said, with a sequel being prepped, it would be surprising if we didn't eventually see a Den of Thieves 4K Blu-ray release - whether here or Stateside - so perhaps it's worth waiting for that.

Dora and the Lost City of Gold Blu-ray Review