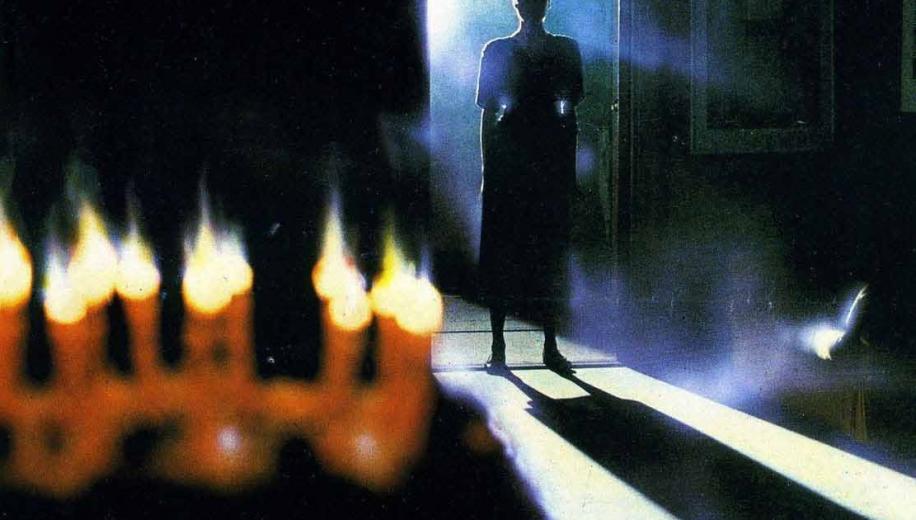 We come to celebrate you, not your dress

With the monumental success of Demons in 1985, a sequel was guaranteed, and coming just a year later, Demons 2 hit the theatres. Using much the same crew, and even some of the same cast – though as different characters – and with a bigger budget and, this time around, something like a shooting script, Demons 2 whilst being exactly the same premise, is a considerably weaker film.

The sequel changes the set up from a cinema to an apartment block, the cinema screen for televisions, excises the mask needed for infection for something far more supernatural and ramps up the 80’s feel. Demons in indisputably an 80’s film, it has the fashion, look and feel, but Demons 2 easily eclipses it in terms of the garish wardrobe, make-up and furniture, it screams 80’s! It also pays far more attention to the plot; there are actual instances of characters, some development, some set-up and pay-off elements as well as a feel of building towards a climax.

All this is great, right? It’s everything the first film didn’t have. Well, yes, but no. By paying attention to film grammar something gets lost. Whilst the budget is bigger, the film stock is better and the whole now looks like a serious horror film, the magic seems to be missing; it’s as if the makers saw the short comings of the original, tried to fix them, but forgot to add in that sense of fun and over-the-top insanity. As such, the film lacks energy and the shortcomings in the characterisation and script bleed through. The effects, whilst wildly gory, lack the same visceral impact, and at times, looks daft (the glove puppet demon that bursts from the boy etc.). The scare factor has lost its atmosphere and the whole thing now, kinda, looks like a music video. The TV studio ending, with its veiled attempt at ‘demons in the tube’ along with the ‘happy ending’ means that the whole film lacks impact. Improbably, it now looks more amateurish that the original!

Its brisk pace, does help, but replacing the heavy metal tracks with 80‘s contemporary pop does nothing to improve things, and those insane scenes now stick out more as padding than any narrative device. There are elements to enjoy, but it is a pale imitation of the original.

Flair to the 80's colour scheme

The improved film stock gives the whole image a far crisper edge, which itself improves on the detail; skin texture and clothing weaves are keen, the 80's furniture in the apartments is well defined, while wall coverings, brick fascias, elevator wires, jewellery etc. all are well seen. Exterior shots of streets at night show lamps and cars with sharp edges.

WCG and HDR give some flair to the 80’s colour scheme, neon lighting is bright and vivid; blues and greens are bold and grade well, while reds are strong. Black level is set well to give some decent frame depth, but the whole film is nowhere near as dark, again harking back to the ‘music video’ look. Highlights are great though, street and apartment light outside are glorious, while depth to flames is terrific.

Digitally there are no issues, and the source is very clean, with a thin sheen of grain to remind you of the filmic origin of the piece.

The DTS-HD MA 5.1 track sets a good scene. Dialogue is held to the front and sounds natural enough, while effects, demon growls and clawing, are given some directionality. The surrounds give ok ambience but are mainly used to fill out the score. Some nice surround effects are given in the TV studio with beeps and sweeps moving around the room, while the score itself gives the best of the immersive effects. Cars crashing and the general melee in the underground car park where the humans make their last stand is well realised with plenty going on, although bass is a tad lacking. LF effects are very limited, with the sub mainly filling out the action rather than dominating.

All the extras are found on the UHD discs.

Audio commentary – New for this release with critics Kat Ellinger and Heather Drain, co-hosts of the Hells Bells podcast – recorded during COVID as they make mention of it!

Produced by Dario Argento – New for this release is a new visual essay by author and critic Michael Mackenzie exploring the legendary film-makers career as a producer.

Defining an Era in Music - Archival interview with Claudio Simonetti.

Audio commentary – With critic Travis Crawford, new for this release.

Together Apart – Visual essay, newly recorded for this release, on space and technology in Demons and Demons 2 by author and critic Alexandra Heller-Nicholas, plays a bit ‘high-brow’ for what is really just schlock, seems to be seeing things that I’m sure the makers had no intent.

Demons 2 is Dario Argento, as producer, and Lamberto Bava, as director's follow up to the pair’s smash hit Demons released just the year before. The plot is identical to the first, just substituting an apartment block for a cinema, but this time around there is an attempt to address the short comings of the original by adding characters and plot devises, all of which undermine the fun aspect of the piece leaving it somewhat sterile, amateurish and looking more like an 80’s music video than a horror film.

The set from Arrow is a delight; the native 4K image is bright, well coloured with good detail and decent blacks. The DTS-HD MA 5.1 track is a tad front heavy, but does add in some good effects, with the score being the main proponent of the surround environment. The extras package is terrific with all new material along-side previous releases. Currently available with Demons as a 2-disc limited edition from Arrow, and quite honestly, it's the first film that makes this set.