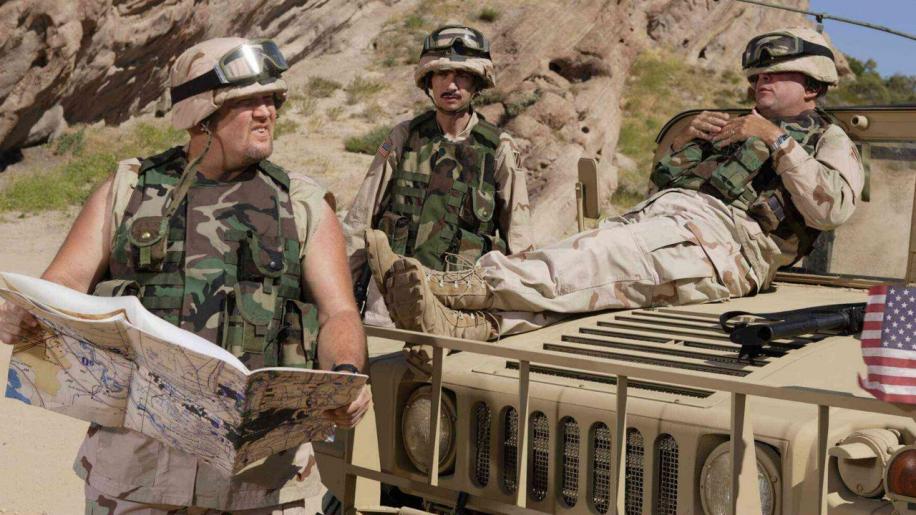 Another week, another dire, so-called comedy hits the AV Play review player. This time we have a high on concept, low on laughs movie that sounds offensive in its subject matter but turns out to be so dumb only the most militant of viewers would find anything offensive at all in the film's execution.

After losing his job and girlfriend, main character Larry (Larry the Cable Guy) joins his friends Bill (Bill Engvall) and Everett (D J Qualls) for a boy's weekend of drinking and shooting. Unfortunately (don't ask how) they are mistaken for army reservists and loaded in a plane headed for Iraq. They are accidentally dumped in Mexico however - but they are not aware of this and are convinced they are in Iraq. After saving a local village they come into conflict with local bandit Carlos Santana (Danny Trejo) and have to take up arms for real.

As you can see, this is the ultimate high concept idea. And around this, the director has weaved a story that is so obvious, and just so downright stupid, that it is difficult to find many redeeming features.

The simple fact of the matter is that this film seems to be completely aimless. If you ignore the tastelessness of the setup, then there is the potential here for some serious satire and political comedy. War is not sacred when it comes to comedy. You only have to sit down and view M*A*S*H (1972) or Stripes (1981) to realise this. However, any opportunity for hard hitting comedy is eschewed here. Maybe it is because the film is set amongst a war that is still waging that it lacks the bite that such an enterprise needs.

So, instead of the hoped-for barbed humour, we get jokes about getting lost, and about the possibility of being forced to marry an obviously gay enemy. The level of humour is also illustrated by the endless Carlos Santana jokes. I think that “No, not the singer” has to be one of the most over-used lines in modern movie history. I found myself saying it even before the characters do.

The film also has the look of a cheap TV series. High Budget this most definitely is not. The sets look cheap and constructed, and the way the film is shot makes the exteriors look like they were filmed on the same set that was used for all the exteriors on Star Trek : The Next Generation.

I have reviewed (and panned) some pretty dire comedies since I joined the reviewing team here at AV Play. Some of them I have found utterly offensive. Reading the setup I expected this to be the same. But it is utterly bland, and that is probably it's biggest fault. The opportunity exists for a hard hitting classic, but it fails miserably in a cloud of unfunny obvious jokes and poor performances. One to avoid.