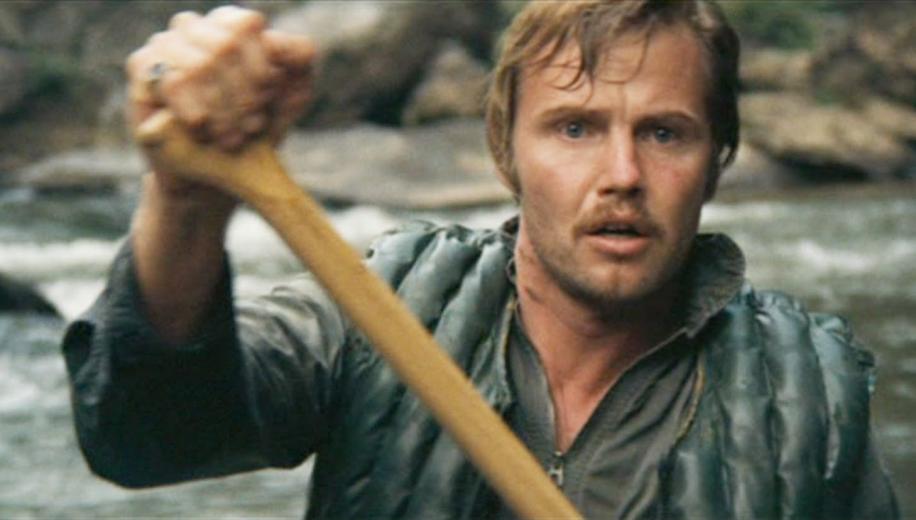 In 1972 John Boorman, Point Blank, Zardoz and Excalibur to name but a few of his directorial outings, decided not to go and play golf but brought to us with unknown and struggling actors, Deliverance.

The story of 4 almost middle aged men who decide to canoe down the Cahulawassee River. A moment of bonding perhaps, a moment to see the ferocious river before it is finally tamed by the building of a dam. The Cahulawassee lies in redneck country in the Deep South. Arriving on dirt track roads they strike an uneasy deal with a couple of local residents to drive their cars further downstream so they can be collected after our 4 intrepid adventurers have ridden the rapids. During these negotiations one of our city slickers feels he has gained a new friendship with a rather unfortunate young man when he strikes up a duet, him on guitar the local on the banjo. What came to pass, now globally known and admired, was The Duelling Banjos.

Lewis (Burt Reynolds) is the obvious alpha male and leader of the pack. Ed, (Jon Voight) is a quiet unassuming guy. Bobby (Ned Beatty) is town through and through. Disrespectful of the local inhabitants; he most of all is the fish out of water. Finally Drew (Ronny Cox) excited and looking forward to the trip he perhaps shows us a voice of reason. Eventually they embark upon the water, navigating their first set of rapids with bravado they all feel they could take on the world.

The next day however proves not so comforting. Ed and Bobby speed ahead of the remaining two, eventually setting up on land to await their imminent arrival. At this point two other wandering hillbillies confront them. Attempts at meaningless but polite conversation fall upon deaf ears, the situation itself becoming ever more hostile. Ed and Bobby are led into the dense forest. Whilst Ed is tied to a tree with his own belt, the poor Bobby is humiliated and brutally sodomised by one of the rednecks. Eventually they turn their attentions to Ed and at this point Lewis, who has now caught up with the forward group, kills one with an arrow through the chest. The other flees.

Deliverance in the past 35 years has been talked about over an over. Some indicating an association between the 4 men and their defeat at the hands of their own arrogance being a mirror for the troubles the US was facing in Vietnam at the time, some taking it as man against nature; being out of their depth and not realising the true dangers that can await people out of their own environment. I fall into the latter category.

Boorman, at the behest of the studio, had to cut costs to the bone. Instructed to find unknown actors he finally choose Burt Reynolds who had been struggling in some dire TV and minor film roles, Jon Voight who had previous success with Catch-22 and Midnight Cowboy. Ed Beatty and Ronny Cox, both of whom were found on Broadway, were the two total unknowns to the group. All four though under the tutelage of Boorman compliment each other well and play their roles superbly.

In the past 35 years few films, if any, have had the same impact that Deliverance has had on image presented of a particular state. Think redneck and your mind is instantly transported back to the moonshine drinking rapist. Think banjo and what springs to mind? - George Formby or the mentally disabled young man swinging on the porch? The later I would wager. Deliverance has been made over and over, off the beaten track protagonists will confront locals only to be slaughtered. Deliverance works so much better than the later hack and slash films for it's sheer brutality. The sense of fear and foreboding that comes out from the film is the real terror here, not in the multitude of corpses that can be amassed.

The construction of the film is almost flawless. From the opening scenes where the gang of four arrive at the small outcrop of buildings we immediately see the characters for what they are. Lewis, confrontational always wanting to win. Bobby arrogant, completely disrespectful of a society which he neither understands or acknowledges. Ed as the watcher, not necessarily weak but certainly one to avoid trouble at all costs even the cost of his dignity. Drew perhaps the only one who accepts these people and is prepared to interact with them on their own terms. The whole stage is set within these opening scenes even down to the confrontation that our adventurers will face over the next couple of days.

Character development is excellent. After Lewis sustains injury Ed has to take the role of leader, the only person now who can lead our merry men to safety. This change is marked, yet subtle, and makes perfect sense with what transpires on screen. It could have happened no other way. Also presented here for our characters, and in fact ourselves, to ponder upon are the consequences of our actions and how long those consequences might remain with us.

Without a doubt Deliverance has to be one of the best films of the 20th century. Fantastic characterisation, scenes which will haunt the viewer for years, excellent photography and plot development. It offers up a feeling of terror which so few films can even approach these days, far too many relying on the hack and slash approach to horror. True horror can be seen in Deliverance, if only because it presents plausible characters and scenes. A pity then in 1972 it was upagainst The Godfather in the Oscar stakes. If Coppola's masterpiece wasn't there then I'm sure Deliverance would have been taking centre stage. Remember though Deliverance is only a film, but if you find yourself squealing like a pig then fear, for you are already in Hell!