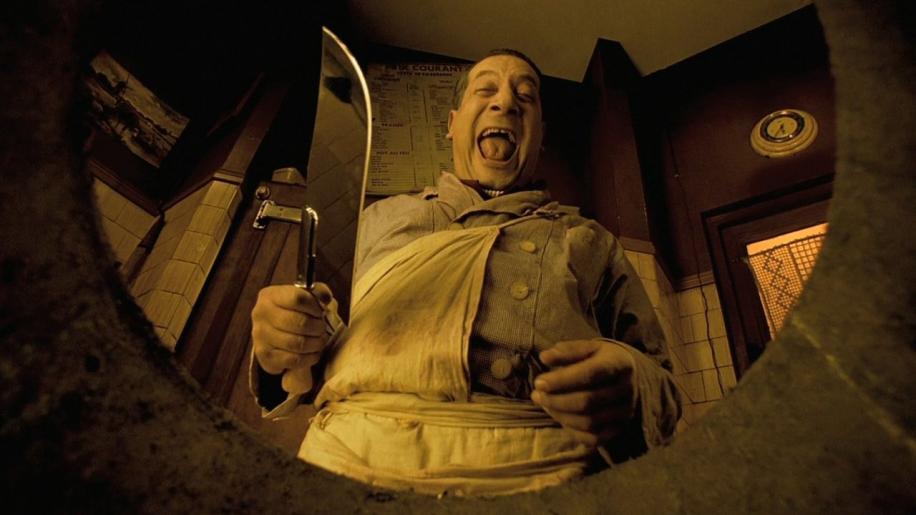 ‘Delicatessen’ was released in 1991 and was directed by Jean Pierre Jeunet and Marc Caro. Jeunet is probably the more famous of these two francophone directors, having brought us the abysmally awful ‘Alien: Ressurection’ (and the outstanding excellent ‘Amelie’). But in France the pair are collectively renowned for their directorial duties on the excellent ‘The City of Lost Children’ (1995). Having worked together on several projects, this movie marks their debut feature presentation, and incidentally picked up four Cesar awards in 1992. It’s also worth noting that Terry Gilliam helped promote this movie on its release, standing testament to its left field cult status.

Looking at the cast list, it reads as a veritable who’s who of quirky French cinema. In the lead we’ve got Dominique Pinon (‘Amelie’), who has gone from strength to strength since his performance in this movie. The highly experienced Jean Claude Dreyfus (‘Autumn’) takes on the co-lead role and again has fared well since his performance here. We’ve also got Marie-Laure Dougnac (‘Au Petite Marguery’), playing the part of Pinon’s female interest, but unfortunately she has not enjoyed the success of her male counterparts. Karin Viard (‘Paris’), Ticky Holgado (‘French Twist’) and Anne-Marie Pisani also make appearance, playing fairly secondary characters.

The plot is a little wacky to say the least and takes place during an unspecified time period in France (although it has the ambience of the early 30’s, during the onset of cultural revolution). Times are tough in the post apocalyptic setting, where food supplies have reached critical levels. Lentils are the primary source of currency and he who has food to sell, is king. We are introduced to the inhabitants of an apartment block, the ground floor of which comprises a butcher’s shop; abode of Clapet (Jean Claude Dreyfus), resident landlord and supplier of his tenants’ daily intake of fresh meat. But how, I hear you cry, does this man have such a ready supply of juicy red, when there aren’t even any rats to eat!! Well, in case you haven’t guessed, any gullible fool who crosses Clapet’s path could wind up on the menu.

Enter said gullible fool; Louison (Dominique Pinon), a former circus star, answers an ad from Clapet, who is seeking a janitor. After sizing up the unusual looking applicant, Clapet awards him the position. Louison goes about his daily business, making his acquaintances with all the slightly unhinged inhabitants of the apartment block. Although he makes new (faux) friends, he is unwittingly coming ever closer to his ultimate demise, like so many janitors before him. But Clapet’s daughter, the undeniably beautiful, yet completely short sighted, Julie, is not going to stand idly by and watch her father slay yet another hapless handyman; plus she has her heart set on the ex-clown as the man of her dreams. So, unbeknown to Louison, who is still slightly oblivious to the threat on his life to stay the hunger of his housemates, Julie begins to mount a rebellion against her father.

Standing as one of the most famous movies to come out of France before ‘Amelie’, ‘Delicatessen’ has always been a firm favourite of mine. Like many French movies, an alternate and fantastical world is created from scratch, to lay the foundations for the magical story that is about to be told. There’s no risk spent on an environment (real or unreal) that will not work, and this is an attention to detail in French movies that I continuously admire. Here, we are cast head first into one of most dreary and unappealing residencies on the planet; one of the seven levels of hell, where cannibalism is rife and people are willing to sell their own grannies to fill their empty bellies. But, despite the sinister overtones of the plot, the entire piece is presented in an amazingly jovial and entertaining manner, with this reviewer reminded of early silent movies on several occasions (and this is not a complaint). This has the effect of making every character in the movie incredibly likeable; an effect which is enhanced when they partake in a couple of almost musical set-pieces, which are a delight to watch. While the horror aspect is most definitely present, it’s not threatening but rather implies peril in a dramatic and almost panto-ish manner, which is much more tolerable. At base level this movie follows our hero and heroine as they do battle against the dark menace of the butcher and his wicked ways. A very heavy dose of black and physical comedy adds to the entertainment factor.

Caro and Jeunet build an environment where Louison brings his magic to the apartment block, thus brightening the lives of the inhabitants with comedy and routine (such as his Jake the Peg number). Standing as a ray of sunshine in a cloud of gloom, he captures the heart of Julie, the forlorn daughter of the maniacal butcher. But like a true gentleman, he does not make any moves but rather remains at a respectful distance, despite her obvious advances. It’s in this manner that the directors introduce an old fashioned romance to the hectic background created by the apartment block (degenerate) inhabitants. Caro and Jeunet’s amazing imaginations and inventiveness aside, the pair certainly know how to get the very best from their collective cast. In the lead role, the rubber faced Pinon is truly mesmerising and has the enviable gift, when he’s on screen, of attracting your attention and holding it. I could never put my finger on why this is but I think that it’s because not only is Pinon an exceptional physical actor, but he’s also fascinating to look at as well; he reminds me of a gurner and is someone I would definitely stare at if I passed him on the street. The monstrous Dreyfus projects a tyrannical persona and dominates the frame every time he comes into shot, spending his evenings greedily counting his money, as a true villain most certainly would. The demure Dougnac wonderfully conveys a beautiful (yet insecure) young woman, hiding the fact that she wears glasses in case Louison will find her unattractive. Both turn out very strong supporting roles, in perfect complement to Pinon’s star performance. In fact, I have to say that the cast are collectively impeccable, with the now iconic “bed springs” scene providing a chance for the cast to gel harmoniously in a silent (ish) spectacle (a scene that that has been often copied but never bettered). With so much hinging on the ability to create the illusion of a community forced to interact in a desperate situation, the casts’ performance certainly is flawless.

There are many strange movies out there but very few have been as successful as this one. This is largely a factor of the simplistic nature of the plot and characters. Caro and Jeunet have carved a microcosm of existence, where the main players live their lives based solely on survival and desperation; as exemplified by one crazy old man whose entire abode is given over to breed snails and frogs, which he consumes daily to the chagrin of his envious neighbours. While there are dark shades of suicide (compliments of the hilariously ineffective attempts of Aurore), a touch of introspective guilt (as exemplified by Julie’s nightmares) and a classic battle of “The Vegetarians” Vs. “The Meat Eaters”, the movie is at its core a good old fashioned love story, set to the timeless battle of good versus evil. This has been combined with some enchanting and well choreographed set pieces, which are enhanced by the visual flair of the directors. The style of the presentation is also something that you will not normally see, with heavy sepia tones adding to the fairytale aspect of the finished product. Throw in an impeccable cast (aside from the roof scene, which I always found a little silly and rife with ham) and a large measure of humour and you’ve got the perfect recipe. Timeless in every sense of the word, ‘Delicatessen’ is a movie that everyone should see at least once and it comes recommended here, and just scrapes an eight for its ingenuity and engrossing nature.