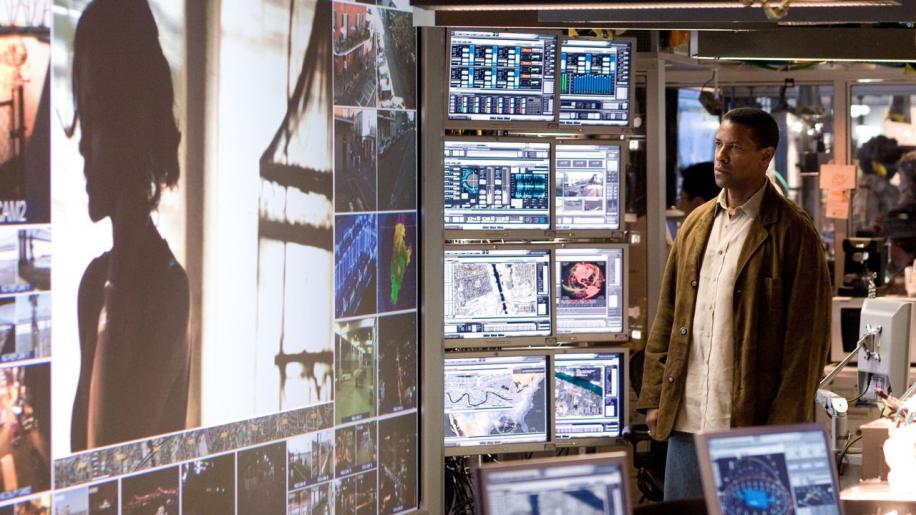 Please note that the UK edition of Déjà vu is locked to Area B and will not play on US machines. For the purpose of this comparison, I watched the US disc on my Samsung and the UK on a borrowed UK PS3.

Touted as being a Big Movie at the time of its theatrical release, and having sequences that adorn virtually every Blu-ray promotional trailer, Tony Scott's Déjà vu is nevertheless, in my opinion, an unsatisfying hunk of sci-fi babble, queasy-cheesy love across time and simply not enough action to warrant the lengthy build-up. Even the usually dependable Denzel Washington - looking incredibly sprightly for a guy now over fifty - proves to be a sour point, over-egging a part that is thoroughly two-dimensional and mistakenly attempting to smother it with emotions that just slow things down. We've already covered this movie before on the site, so the plot, in simplified terms, boils down to Washington's ATF agent, Doug Carlin (why do the yanks have so many units and organisations - what the hell is the ATF?) investigating a terrorist atrocity that has blown a New Orleans ferryboat full of Navy personnel and their families out of the Mississippi. The discovery of the corpse of a young female, also washed ashore, further fuels the mystery of who committed the act and why? Tragically, it also looks as though Doug's partner has been caught up in the destruction, too, which makes the case somewhat personal for him. Enter a shadowy government agency (yep ... another one) headed up by a chubby-cheeked Val Kilmer, who are able to view events as they happen ... several days in the past. Utilising some top secret time-bending technology, these computer whizzkids and scientific boffins attempt to reconstruct the final days in the life of Claire Kuchever (Paula Patton), the girl fished out of the river, who Doug has figured out was, in fact, a kidnap victim of the mad bomber. So, via banks of surveillance monitors that can almost magically transmit images of the past from every conceivable angle (even through walls),tapping into the deceased's last activities, they hope to catch a glimpse of the lunatic's face.

Rather protractedly, but all-too-obviously, Doug begins to fall in love with the doomed girl, Washington's face eliciting little smiles now and again as he watches her, his eyes growing watery and grave as he realises that her time is running out whilst he stands by, powerless as fate overtakes her. Scott plays these early acts of remote and unrequited love, with contrived excess. And Washington, at pains to be more than the scripted version of Doug, pitches in heaps of unnecessary emotion - overly witty banter and nice guy professionalism with seemingly all and sundry, and then frantic determination to somehow save Claire from a death that has already claimed her. That it is Doug who ascertains that there may be a chance of thwarting fate is the time-honoured conceit of pure filmic formula - the hero stumbles onto something totally new and alien to him, gains a crash-course in fresh skills and is then able to take control and indulge in his own brand of derring-do in order to save the day ... or in this case the girl. Oh, and the ferryboat - which seems to get forgotten about for much of the first half of the film.

But, hey, the genre's built on such things, I hear you say. And, of course, you're right. Normally, I am more than happy to go with the flow with such nonsense, but with Déjà vu, I felt absolutely no connection with any of the characters, was rather unmoved by the handling of an atrocity that had claimed the lives of several hundred innocent people and felt totally cheated by the inept and really quite lame efforts of the makers to incorporate some heady sci-fi concepts into the mix. Minority Report did this type of time-switch detective thing much more justice, even when it wasn't resorting to Spider-bots and jetpacks. I'm not going to delve into the “what ifs” and other paradoxes of time travel, and it appears that writers Terry Rossario and Bill Marsilii didn't bother all that much either, since they leave out far too much of the twisted and entwined destinies angle and have too many loose ends dangling in order to create some pathetic sort of symmetry to their plot. Hell, even Van Damme's Timecop had more fun with the concept than this.

A lot of people have commented on how Scott's direction is much less showy and self-conscious than his usual fare, and this is certainly the case when Déjà Vu is compared to something like the spasmodic Domino, but the fact is that his style here is still overly-visual and technically over the top. We still have a camera that is sparked with an enormous amount of nervous energy, some sequences so animated and roving that you could suffer sea-sickness whilst sitting on the sofa, and the visual trickery, whilst understated, still makes even a commonplace scene of people simply talking an elaborate showcase for character-attentive photography and unnecessary orbiting of a subject. The thing is, this type of direction suits “image-is-everything” movies like Underworld, Aeon Flux or The Matrix - actually enhancing them in a lot of cases - but works against material such as this, which tries its damnedest to be about the characters, rather than the pyrotechnics. The action, when it comes, is typically fast and aggressive though I, for one, wasn't blown away by any of it. The chase scene featuring Doug driving a space-age Hummer and wearing a Snow White goggle device to enable him to see Caviezel's bad guy four days in the past is concept-heavy and utterly ludicrous. Plus, I didn't take to the amount of damage our hero causes to other road-users, even if his actions are geared towards the greater good of mankind. I love wanton mayhem as much as any adrenaline-junkie - just check out my review for The Road Warrior - but whilst this type of thing is a pre-requisite for the genre, and works exceedingly well in things such as Die Hard 4.0 (awesome, folks, by the way), for example, it just seems needlessly gratuitous here ... even if the script might make it clear that events can still be altered. The sequence, however, is still about the only time when suspense is actually cranked up and the pulse begins to pound.

So, whilst this mind-boggling sci-fi lunacy seeks to bed its wacky scenario in topical events and threats and makes the commendable, but unworkable, attempt to connect us to its preposterous plot on an emotional level by having Washington's character heartfelt, human and unafraid to be sensitive, it remains dreary and dull. I don't have a problem with the story, or its outlandish concepts at all, but rather the insipid and quite pathetic characterisation that Washington has to play with. I just don't buy it, I'm afraid. His naturalistic, easygoing approach is way off the mark - all those early comic lines and the happy-go-lucky “I'll get on with everybody” attitude is just crass and irritating. As a character, Carlin is just a caricature. In trying to heave themselves away from the usual, run-of-the-mill heroes, Scott, Bruckheimer and Washington have welded theirs to stodgy platitudes, unconvincing love and a truly unbelievable level of intelligence. Although Washington has delivered some sterling performances in his time - most notably in Glory, but also with Scott, himself, on Crimson Tide and Man On Fire, for examples - I just can't take to him in this role at all. Ironically, he gives so much to the part that it becomes annoying. The interrogation scene he has with Caviezel is a major case in point - with Washington making Carlin so understanding and accommodating that it literally made my skin crawl.

Val Kilmer has definitely gone down the John Travolta route with regards to facial aging. Just look at those jowls now! A difficult actor at times - though rarely a bad one - he is sadly completely forgettable as the head of the FBI's time-cop special unit. Paula Patton gets to look cute - even as a corpse, in a strangely uncomfortable morgue meeting she has with Doug - but, once again, she makes little impact, even considering that she becomes the main thrust of the story. Caviezel, a very fine performer with a truly unique air of elevation and mysticism about him, is wasted here, as well. His mad bomber is given precious little motivation for his acts, a clutch of lines that are clearly meant to be thought-provoking but lead absolutely nowhere and, worst of all, no hint of menace whatsoever. As good an actor as he is, he fails completely at playing a bad guy.

On the plus side, the score from Harry Gregson-Williams is fast, involving and contains some smart themes that do for the mood and atmosphere of the story all the things that the stars and the screenplay cannot. Able to turn his hand to a variety of different genres with terrific dexterity and class - from Sinbad And The Legend Of The Seven Seas and Kingdom Of Heaven to Chronicles Of Narnia and even Bridget Jones - Gregson-Williams is one of the most accessible and dynamic of modern composers. But it is saying something when a composer's work is about the only thing that remains in the memory after viewing a movie.

Déjà vu is a poor exercise in thrills, folks ... and sci-fi fans won't fare much better with it either, I'm afraid.