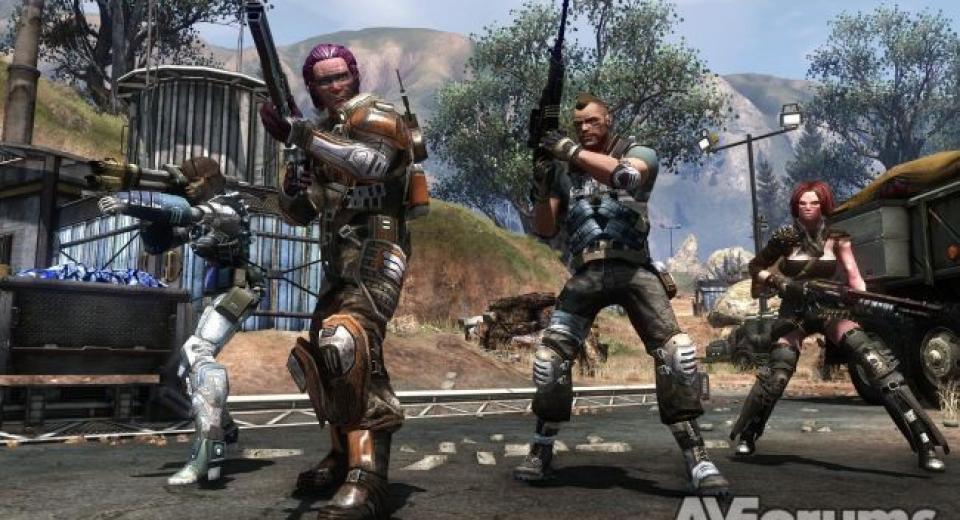 With all the fuss surrounding Bungie’s upcoming Sci-Fi shooter-MMO Destiny, you’d be forgiven for thinking the same type of game hadn’t been pulled off before. In recent months alone we’ve had the likes of Firefall, Dust 514 and Planetside 2 scratching that particular itch in beta format on both PC and PlayStation, and those three are now joined by the full retail release of Defiance - a third-person massively multiplayer shooter cloaked in the stylings of its namesake SyFy television series. Battlestar-lite for a new generation then? Or should we be running scared from another Battlefield Earth?
If you’ve seen the TV show, you might already know the answer to that question. In keeping with the theme of season one’s narrative, you play the role of an Ark Hunter; a sort of stylised scrap merchant sent to hoover up precious items and military intelligence strewn amidst the former battle zones and decimated ruins of a terraformed future Earth. Both the human and alien races that wander those wastelands are technically at peace with one another, but several of the more savage species introduced by the visitors simply cannot be tamed - making for a convenient supply of insectoid-style creepy-crawly enemies, devious humanoid aliens and some fairly terrible dialogue that bridges the two.
The basic flow of exploring Defiance’s pulpy storyline will be familiar to anybody versed in MMO tropes, and indeed those with a penchant for traditional open-world action games will be equally well-served. This “season one” map is packed with subtle icons that represent quests, gameplay challenges, Arkfall events (randomised survival-based combat arenas that attract nearby players in pursuit of rare loot drops) and other shiny trinkets, and it’s up to you to decide where you explore and whom you team up with to take on the shootin’ and lootin’. In a traditional MMO sense, this is a game that features a quest log, an inventory screen, two different currencies, upgradable weapons, an online marketplace and a whole suite of options for partying up or delving into its scant suite of PvP battle modes. The main storyline is peppered with fully-voiced cutscenes and a touch of production value here and there, but for the most part your AI compatriots are content to hover in the world and request their trinkets through a quick paragraph of text; much like any other massively multiplayer you can think of.
And whilst the terminology might be alien and the UI fashioned after an action game rather than a complex online experience (radial menus feature heavily for those with controllers), at its core Defiance still hinges on fetching items, flicking switches and killing stuff in order to fill a coloured bar, at which point the usual endorphin-packed swirl of light and accompanying ding! act as an apt reward. On levelling up, players are presented with an increase in their “EGO” number and an accompanying upgrade point, which in turn can be assigned to a grid-like board of combat abilities that’s (unfortunately) the same for everybody.
And those limitations might be a warning for some of you; because despite having all the mechanical trappings of an MMO, Defiance is decidedly light on role-playing but heavy on combat.
Creating your character is a simple matter of choosing between two different species and applying a couple of basic visual customisations (along with a specialist combat skill from a selection of four), which means the majority of player-controlled characters you’ll encounter are roughly equivalent in terms of ability and looks. Some might run a little quicker, some have better defences, some can activate a quick boost to their damage output or deploy a decoy; that’s about it. Like the majority of shooters, weapon selection is the main analogue for player expression within the Defiance universe, and fortunately there’s just enough wiggle-room in its armoury to add a much-needed dose of variety. Taken as a shooter, this is pretty impressive stuff considering the massively-multiplayer engine generating its huge vistas. Gone is the ponderous and imprecise combat that plagues most MMOs, and in its place is a thoroughly playable approximation of a third-person action game, with dice rolls either cleverly hidden in the background or else entirely absent. Whether you’re packing an energy weapon, grenade or a pistol, if you put your reticule on somebody and pull the trigger then you’ll hit your target, instantly adding a layer of satisfying feedback that’s usually entirely lacking from its sibling genre.
The engine also copes well with both singleplayer and large groups of player-controlled hunters, with little to speak of in terms of lag or teleporting enemies. There are no obvious instanced areas to speak of (apart from a few clearly-labelled 4-player co-op missions) and you’re generally free to wander into any area of the map and get stuck in with whatever’s happening, but I get the feeling there must be some phasing trickery going on behind the scenes to make it function this smoothly. Of course by all accounts I'm playing over a month after launch now, and it may not always have been like this. Regardless however, it's certainly a smooth experience at the moment, and that's what's being reviewed here.
Whilst that general slickness is appreciated in terms of an MMO, if you begin to compare Defiance to a dedicated third-person shooter then things start to fall apart pretty quickly. Whilst the engine does a good job at rendering the effects of your projectiles, it’s likely that those vanquished enemies were just shambling towards your position or rooted to the spot rather than using cover or attempting anything as fancy as flanking. It seems there are hard limits to AI when working in a huge multiplayer environment such as this, and Defiance’s firefights are a lot more slow-motion Serious Sam than they are Halo. If you can duck behind cover and remain patient it’s not difficult to get through unscathed provided you have the right arsenal, but then it's equally easy to get stuck in the open as ten enemies hone in on your position at once.

It’s worth noting that although Defiance is trying to be two things at once, they’re hardly opposing goals. RPG mechanics permeate almost everything we play nowadays, and the open-world action structure means the majority of players will have a touchstone on which to base their expectations. The overall experience of exploring the map is one that’s pleasant for the most part, and it’s easy to lose yourself following a breadcrumb trail of missions and gameplay challenges to a whole new area, then rinse and repeat until it’s time for bed.
What Defiance definitely isn’t however, is anything more than that. Although it’s never offensive in any way, it’s also rarely exciting; and that’s largely down to the underwhelming story, dialogue and visual design. It takes place in a relatively drably-designed world that never quite sells itself to the viewer, and although watching the TV series enhances the lore and sense of place a great deal, I wouldn’t recommend that particular experience to anybody but the completely Sci-Fi starved. At least not yet. Maybe the second season will pick up the pace.
In both its forms Defiance certainly has potential and isn’t without merit, but it's in need of a huge shot of adrenaline to lift it to gold standard.