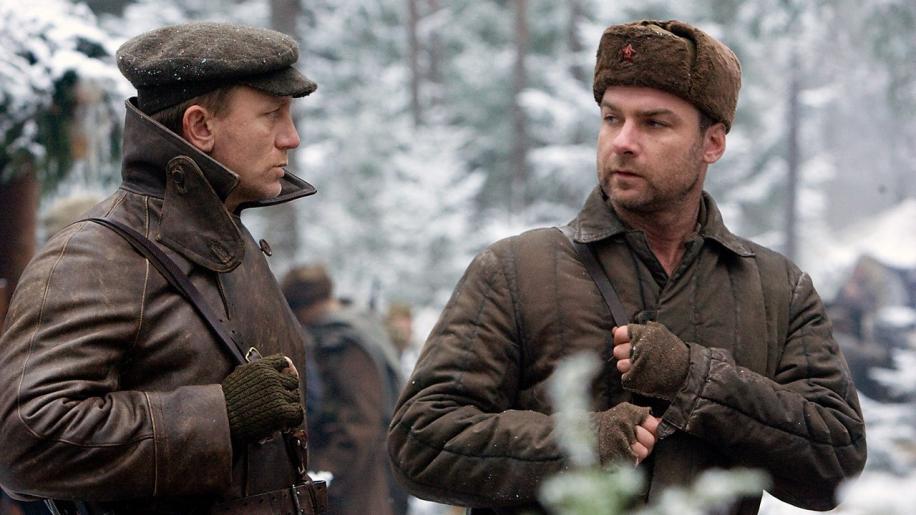 'Defiance' was released in 2008 and was directed by Edward Zwick ('Blood Diamond'), who also co-wrote the screenplay. It's based on a true story involving three brothers, the Bielski's, who struggled for survival during World War II. Perhaps the biggest draw for this movie was the fact that it starred Mr. James Bond himself, Daniel Craig. After the success of 'Casino Royale' and bringing the best Bond yet to the big screen (well at least the most believable one!), Craig instantly became the hottest property in Hollywood. Joining Daniel Craig in the co-lead role is Liev Schreiber ('Wolverine: Origins'), who plays Zus Bielski (Craig plays Tuvia). Jamie Bell ('Billy Elliot') also joins the cast as Asael Bielski. So with a top director who has provided a string of hit movies, the hottest name in Hollywood and a true story based during WW II, it seems that all the ingredients are present for an epic war movie.

The movie opens with archive footage of Hitler's progression during WW II, which really sets the scene for the horrors which the Jewish people faced during that time. The movie centers around the three Bielski brothers (there's also a fourth brother but he doesn't do a whole lot!) and the hardships which they face during the Nazi occupation of Belarus circa 1941. The S.S. are out in full force and scouring the land to capture those of Jewish persuasion and imprison them in Concentration Camps. Within weeks over one million Jews await deportation and death. Forced from their humble home, the Bielskis escape to the dense Belarusian Forests (Lipiczanska Forest), where they meet with more villagers who are also fleeing from Hitler's Holocaust. With Tuvia taking his place as the natural leader of this small band of rebels, they seek a secluded area to set up camp. Every day more Jewish refugees join Tuvia (one of whom is Spider from Corrie!) and word spreads that the Bielski camp is the only safe refuge for miles. Facing impossible odds the small, tightly knit commune grows in strength and in numbers.

As time progresses the camp becomes a haven for Jewish refugees and the reputation of the Bielski partisans also spreads. The camp forms a small militia who partake in guerrilla warfare to reclaim supplies and munitions from the Nazis. As the deathly cold of winter advances and food supplies run short, a divide forms within the community. Zus is of the opinion that the camp should fight the Nazis, while Tuvia believes that the non-military camp members should remain hidden and simply move camp if threatened. Frustrated with each other's stubbornness, the divide grows and disrupts the delicate balance of harmony within the Bielskis' camp. With the killing winter now upon them, disease rampant and the threat of a Nazi raid ever present, things are looking increasingly bleak. This rift becomes the focus of the movie, although there are numerous subplots involving relationships and other irrelevant factors. For the remainder of the feature we truly see the Bielskis and their camp face real hardship and incredibly testing situations as they struggle daily to survive.

Although set in WW II and lasting over two hours there's not really a whole lot in the way of action in 'Defiance'. There are a couple of impressive assault sequences and the climactic battle is pretty engaging but there are long periods of inactivity, where we slowly watch morale wane within the Bielski camp as the community slowly unravels. Zwick treats this tale with the tenderness that it deserves and ensures that the daily struggle for survival which each refugee faces never seems contrived. It's the spirit of a community backed into a corner, with two options; survive or die, which ultimately decides the fate of these exiled Jews. As such the battle sequences take a back seat in 'Defiance' with the lives and relationships of the Bielski camp members becoming the focal point. While this is skilfully portrayed it can lead to periods of boredom, especially during the middle part of the movie. It seems, at times, as though direction is somewhat murky, with Zwick hovering between the realm of tender drama and all out war epic. I also felt that there was too much in the way of character development and a lot of the characters' subplots seemed irrelevant at the close of the movie. In saying that, this is a true story so Zwick was probably restricted somewhat regarding the battle content of the production.

Zwick does add some nice camera flairs such as the opening scene melding perfectly with the archive footage and the cinematography from Eduardo Serra is stunning. Craig once again demonstrates what a fine actor he is with his portrayal of the hardened, yet tender Tuvia. He perfectly portrays the weight of Tuvia's responsibility for hundreds of lives and even manages to nail the accent! As the movie progresses it's the interaction between Tuvia and Zus which becomes the focus. Schreiber proves to be equally as competent as Craig in the acting stakes and delivers a very impressive performance. Without the on screen chemistry between these two fine actors, the telling of this tale would not have had as much of an impact. Bell provides strong support as Asael and once again shows that he is close to breaking into the Hollywood A-List. There's also a whole host of extras who play the various refugees, some of which play a bigger part in the story than others. All are competent and there were no real instances of “extra over-exuberance”. All these factors add to the realism of the presentation, which manages to successfully and accurately tell this incredible story of survival.

'Defiance' is very well put together and well acted, even if Craig is made out to be another Moses type character (complete with a pure white steed!). There are a couple of exciting action set pieces that are edge of the seat stuff and provide a welcomed break to the inactivity of the camp community scenes (which dominate). However, this inactivity is where the main weakness in this movie lies and while definitely worth a watch, ultimately there just isn't enough substance to warrant a second view.