Disaster has never looked so spectacular 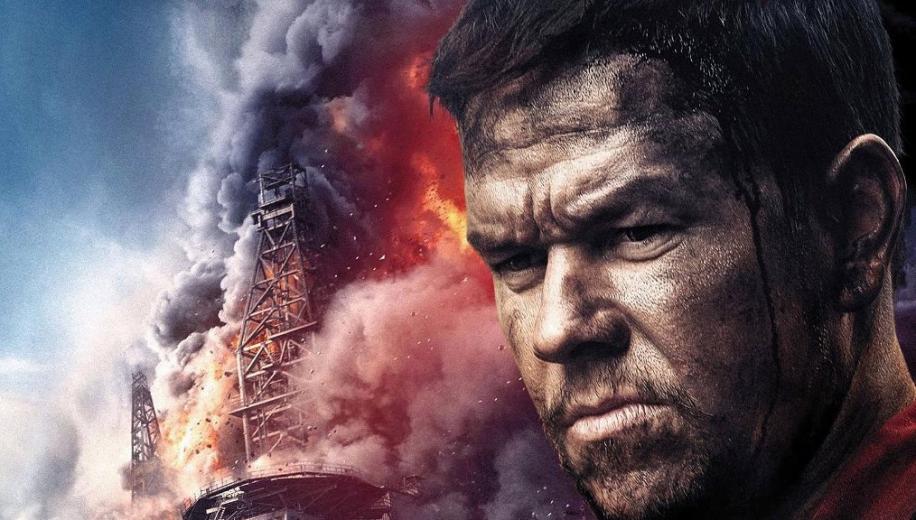 Hope is not a tactic

Deepwater Horizon is the fictional retelling of the doomed oil rig disaster and oil spill which occurred off the Gulf of Mexico resulting in the worst environmental catastrophe in American history. The film is headed up by the go-to guy regarding biopic films, director Peter Berg, and stars talent such as Mark Wahlberg, Kurt Russell, John Malkovich, Gina Rodriguez, Dylan O'Brien and Kate Hudson. The intention to tell a true depiction, as with all ‘based on true events’ films is not the imperative but rather to highlight the disaster by showcasing the heroes that come about in such adversity – and on that level it succeeds; but don’t go expecting Academy Award-winning characterisation or an answer to what actually happened – it’s not that type of film.
Berg directs with a sure hand; adding in enough sugar and spice in the early scenes to assist in drawing the ‘everyman’ into the audience's empathy, so that when the disaster hits there is a modicum of emotion involved. Not so sure about his allegorical anvil though; whether he is beating you over the head with magenta ties, exploding coke cans or the death of an oil covered pelican the portents of doom are so obvious as to be annoying. However, the destruction is spectacular, and that’s what this film is really all about; what with the reliance on practical effects and the building of a near life sized oilrig on which to house the film, it certainly looks the part. It is a good watch with just enough emotional investment and over-the-top visuals. Deepwater Horizon was filmed digitally using the Arri Alexa 65 camera at resolutions of 3.4K and 6.5K, but was ultimately finished using a 2K Digital Intermediate (DI), which presumably formed the basis for this Ultra HD Blu-ray release. The film was upscaled to 3840 x 2160p and presented in widescreen 2.40:1 aspect ratio. The disc uses 10-bit video depth, a Wider Colour Gamut (WCG) and High Dynamic Range (HDR), and is encoded using the HEVC (H.265) codec. We reviewed the Region free UK UltraHD Blu-ray release of Deepwater Horizon on a Panasonic 65DX902B UltraHD 4K TV with a Samsung UBD-K8500 UltraHD Blu-ray player.

Detail is pristine for this upscale, from finite skin texture (hair, pores etc.) to wave crests on the ocean, from control room switches and computer terminals to the oil rig towers and their defiant scaffolding against the skyline; all have keen, sharp edges with no softness seen. There are only marginal improvements over the 1080 image, but they are nevertheless visible from close ups to distance images.

It is, as always, with the WCG and HDR where the real benefits of this 4K disc are seen; colours are so much richer, from skin tones to sea depth – the reds of the derrick uniforms are deeper and more robust, the blues of the sky are far more natural while the oranges of the flames have so much more depth. Indeed all traces of banding are banished in this presentation compared to the Full HD version. One slight downside is the CG seems a little more pronounced and not as ‘well hidden’ compared to the 1080 image.

Brightness and contrast are set to give marvellous depth to the black level, the night shots are wonderfully realised with plenty hiding in the shadows when needed, while at the other end of the scale whites never clip and also reveal plenty of detail – again check out wave crests.

Despite the 2K DI this image trumps the 1080 version at every turn. Simon Crust reviewed the Dolby TrueHD soundtrack on a 5.1-channel setup – As good as the picture is the surround track is even better! Simple things like a couple waking up in the morning with the rustling of bedsheets, the creaking of furniture, the ambient sounds outside and dialogue between a husband and wife (however trite) sounding so natural and alive. Such attention to detail is present throughout the track, the helicopter rotors shaking the room as during the flight to the rig, the strained speech underneath the same rotors as the passengers disembark or the various noises associated with the rig’s control centre add a real sense of being there. Of course the track really hits its stride during the destruction with a near constant rumble from the sub indicating catastrophic failure, while the explosions and debris place you in the centre of the inferno; it is a frightening sound track with its realism. Dialogue is never lost in the mayhem, however, (close but deliberate in the aforementioned helicopter disembarkation) sounding very natural from the frontal array but given plenty of directionality when needed. Bass is tight, controlled and epic with near constant LF effects once the destruction hits its stride. The score is well layered into the mix, also never missing a beat. An effortless reference score of 10.


Hands down one of the best Dolby Atmos soundtracks to date

Steve Withers reviewed the Dolby Atmos soundtrack on a 7.2.4-channel setup – Deepwater Horizon has one of the best Dolby Atmos soundtracks we have heard to date, it's simply reference all the way. The sound designers have taken full advantage of the format's object-based approach to create a multi-dimensional sound field that enhances every scene. The film opens with a POV as a submersible dives down towards the ocean floor and the audio immediately immerses you in this world before following the oil rig workers as they go through their usual routines in what they assume is another working day. Here the ambient sounds are effectively used to create a sense of realism before all hell breaks loose. Once the disaster happens every speaker is fully utilised to completely place the viewer inside the rig as it begins to tear apart. The results are often astonishing with sound moving around the side and rear walls and overhead. The dynamic range is also impressive whilst the low frequencies are often thunderous, giving your entire system a serious workout. It's quite simply one of the most active and impressive soundtracks we've ever heard and yet, amongst all this chaos, dialogue remains clear and focus. The score is also mixed effectively throughout the film and the end result is a soundtrack that is pure demo material from start to finish. Found on both the 4K Ultra HD disc and the 1080 Full HD version, the extras are the same:
Beyond the Horizon – A fifty minute making of feature, split into five segments and packed with interviews but very little substance. Contains chats with the likes of Mark Wahlberg, Kate Hudson, Kurt Russell and Dylan O'Brien while they talk about the usual fluff of working on a big disaster movie.
Captain of the Rig: Peter Berg – Twenty minutes of back slapping from the cast about their erstwhile director.
Fury of the Rig – A thirty minute look at the largest set ever built for a film and how it was used.
Deepwater Surveillance – Nearly twenty minutes of behind the scenes footage of raw unedited multi camera set-ups used to capture the mayhem of a blowout and other stunt/practical effect heavy scenes.
Participant Media Work Like an American - American Worker Tributes, at sixteen minutes, chronicles some of the real life heroes caught in the disaster, while I Am a Steel Beam is a poem, of sorts, narrated by Peter Berg and secondly by Gina Rodriguez. Deepwater Horizon is the fictional retelling of the explosion and oil spill which occurred off the Gulf of Mexico in 2010. It is headed up by director Peter Berg and stars Mark Wahlberg, Kurt Russell, John Malkovich, Gina Rodriguez, Dylan O'Brien and Kate Hudson. Berg directs with a sure hand adding enough audience empathy, so that when the disaster hits there is a modicum of emotion involved. The destruction is spectacular, and that’s what this film is really all about; what with the reliance on practical effects and the building of a near life sized oilrig on which to house the film, it certainly looks the part. It is a satisfactory watch even if it doesn’t delve too deep into the ‘facts’ but whether or not it would survive without its ‘true story status’ is another matter.


A great UHD package with an impressive picture and spectacular sound

As a 4K Ultra HD Blu-ray package, the set from Lionsgate is pretty good; drawn from a 2K DI the picture is nevertheless spectacular in terms of detail, colour reproduction and black level, trumping the 1080 image at every turn, while the immersive audio soundtrack is absolutely awesome creating a natural surround environment with superb bass and effects that a so realistic as to have you ducking for cover. The extras are a little light in nature but do serve the main feature well.