Now why can't they just make live action movies like this? 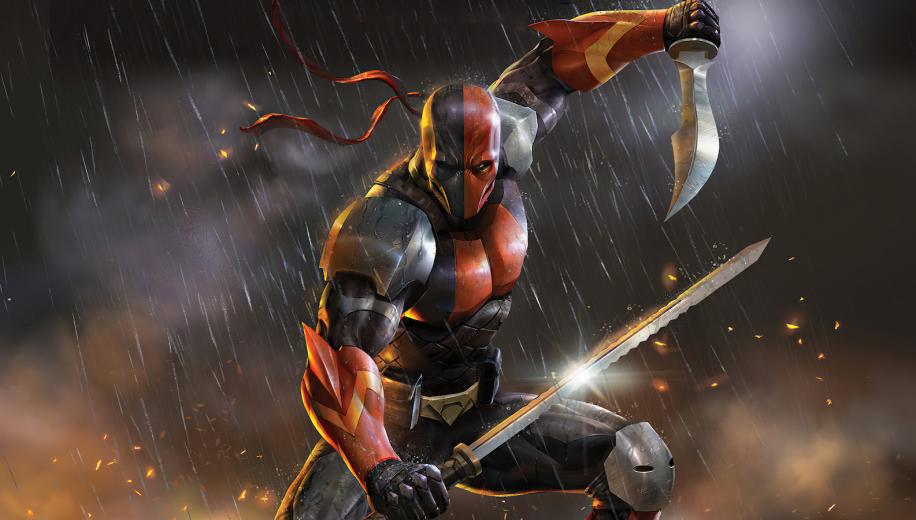 Deathstroke has been traditionally portrayed on-screen as a villain. Sure, he's got a tragic backstory, and a moral code, but he tore up a storm on the Arrow TV series (an absolute highlight of an antagonist in its overly long run), and ripped the Teen Titans a new one - in both the animated shows and in season 2 of the impressive live action Titans series. He's too good a bad guy to make into a good guy right? Well, no, the original comics had him pitched as more of a dark anti-hero, and this new animated show returns to this premise, introducing fans to a slightly different angle on the bad guy they love to hate, and positing him opposite a far more evil force which he has to go through hell to stop.

The story has Slade Wilson as a loving family man who just so happens to also have a secret identity - black ops assassin Deathstroke, who takes suicidal missions against international bad guys to put the experimental super-healing serum the military injected him with to good use. When terrorist organisation HIVE attempts to use his family to coerce Deathstroke into more nefarious operations, he is forced to make some impossible decisions.

Originally a web series, Knights and Dragons is a superb watch, thrilling, breakneck paced, and with some seriously bloody violence in it (though the opening assault never really gets bested). The characterisation is spot on, with The Shield's Michael Chiklis perfectly chosen to play another do-whatever-it-takes anti-hero with-a-heart (although often barely recognisable, trying his best attempts at deep throat Batman vocals), and NCIS's Sasha Alexander great as his beleaguered - and also kick-ass - wife. Chiklis' Deathstroke comes across as a beautifully unstoppable force. Even the most desperately impossible situation, where anybody else would back down, he charges head-first into, giving the feature a fully-adrenalised feel, keeping you on edge and invested throughout. If only they made live action movies - even B-movie actioners - as blisteringly exciting and unabashedly violent as this.

Deathstroke: Knights and Dragons comes to UK Region Free Blu-ray courtesy of Warner, with likely an identical disc to the US release that - for a change - comes later (albeit only a day).

The disc presents a 1080p/AVC-encoded image in the film's original aspect ratio of widescreen 1.78:1.

Warner's animation line continues to impress, albeit within the confines of the pretty familiar limitations of the productions, with stylistic flourishes and subtle tweaks attempting to add some flair to the otherwise traditional animation, which doesn't really go above and beyond on the detail front, but looks clean, crisp and impressive nonetheless.

The colour scheme is full of bloody reds, strong primaries and popping blue energy beams; explosions ignite the screen and black levels remain solid and inky, affording a keen backdrop for the proceedings. None of these animated releases really stand much of a chance of being regarded as demo material - not even in their 4K guises (Deathstroke doesn't appear to have a 4K alternative, even in the US) - but that doesn't stop this being very good nonetheless.
﻿

Deathstroke enjoys a lossless DTS-HD Master Audio 5.1 track, which revels in the intense action sequences, explosions, gunplay and powered attacks, thrumming through with a decent score and is, overall, an engulfing presentation.

Dialogue remains well prioritised throughout, afforded clear and coherent presentation, predominantly across the frontal array, whilst the score, occasionally generic but perfectly suited to enhance the action, drives the surround background weighting. The effects are where it's at, exploding with thrilling bombast as bullets whizz around your living room, and explosions boom underfoot. It's bracing and punishing, a very good mix indeed.
﻿

Deathstroke doesn't exactly get the traditional Warner animation line treatment, which normally involves multiple Featurettes and even an animated short, instead offering but one single Featurette, although thankfully it's a really good one.

The single quarter-hour Featurette manages to cram an awful lot into its runtime, pulling background from the Deathstroke creators, as well as the various actors who have played the character (including Arrow's Manu Bennett, and this incarnation's Chiklis), and giving a superb overview of the often misunderstood character and his varying portrayals over the ages. It's well worth investigating.

Deathstroke: Knights and Dragons does a superb job repositioning the character in a manner closer to his original comic source material, reinventing him as a dark anti-hero mercenary assassin and cleverly pitching him against a clearly much more classically evil antagonist. Bloody, brutal and exhilarating, it's an excellent companion-piece to Warner's earlier Mortal Kombat: Scorpion's Revenge and hopefully a sign of more mature animations going forward (fingers crossed they don't hold back on A Death in the Family).

Warner's UK Blu-ray release of Deathstroke: Knights and Dragons delivers very good video and audio and a single superb extra, making for a must-have purchase for fans. It's well worth checking out.