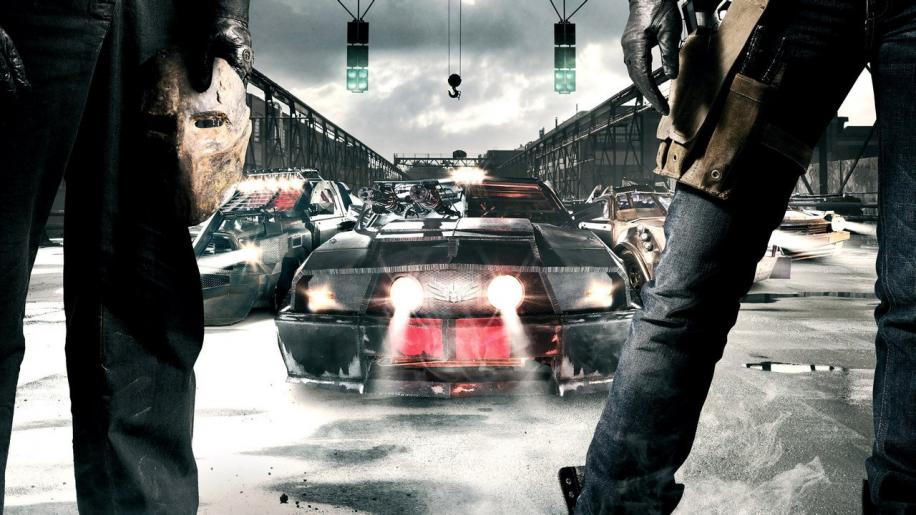 
This is just one of the quieter moments from 'Death Race', now available in its extended edition on Blu-ray. It's a very honest movie. You know from the outset what you're going to get. The title says it all and it does what it says on the tin.
You get armour plated cars with more firepower than an army garrison, driven by people out to kill each other - so it's a bit like the M25 on a Friday afternoon.

Originally entitled 'Death Race 3000' this was to be a remake of the 1975 David Carradine movie, Death Race 2000. Instead, director Paul W. S. Anderson gives us a millennium update and takes full advantage of the developments made in CGI (unheard of in 1975) and surround sound technology to deliver a full frontal assault on the senses that will leave you breathless and stunned, if not reaching for the paracetamol.

It's aimed fairly and squarely at the 16-24 age group that constitutes a large percentage of the cinema-going and Blu-ray buying public. Within that audience, words such as 'awesome', 'cool' and 'heavy, dude' might be used to describe this movie and its characters.

In the movie, the world as we know it has gone to pot. The Banks have crashed, unemployment has risen dramatically and crime rates have soared. (Does this sound familiar to anyone?). The prison population has grown to the extent that private firms now run them with a keen eye on profits. Hence the creation of the Death Race, a televised Gladiator type fight to the finish, watched by its audience on pay per view TV.

'Death Race' gets in gear with an update on what's happened to the Frankenstein character of the 1975 film, reprised as a cameo 'voice on' by David Carradine. We're accelerated, full throttle, to the end of a race; he wins but sustains heavy injuries which, ultimately, lead to his demise on the operating table. Prison Warden Hennessey (played by Joan Allen) arranges for Jensen Ames (Jason Statham), a former racing driver, to be framed for the brutal murder of his wife and thereby provide another driver to wear the Frankenstein mask, thus continuing the money making spree.
That's it folks. That's the plot and it's all that's needed to hold together the onslaught of on screen mayhem and murder. Basically, it's chewing gum for the brain.

McShane steals the whole movie with one scene where he detonates a bomb and says straight into the lens, “I love this game”.

The Terminal island prison is a very grim, grey place and the film has been deliberately desaturated to underline this. This also means that explosions, flames belching from machine guns and, of course, blood look colourful by comparison.

Ames is only in the place two minutes and he's already flattened three cell mates who wanted to 'welcome' him to his new abode. There's a lot of territory marking going on and Ames notices another driver, Pachenko (Max Ryan), making the same hand gesture as the man who killed his wife. So his card is marked.

The race itself is a three stage affair, the rules being that you just have to survive the first two rounds while the other drivers are bumped off one by one, but in the final stage you have to be first across the line - oh, and it helps if you're still alive.

Car nuts will love the beefed up, armour clad cars. Frankenstein's (Ames') car is a 2005 Ford Mustang and others include a Porsche 911, a Buick Riviera and there's even a British built Jaguar XJS in there.

The race footage is all very tightly cut and there's much usage of handheld, fluid moving camera techniques to involve the audience. A heavy rock soundtrack mixed with the gunfire, explosions and crashes adds a real MTV feel to the final movie.

The female 'eye candy' is provided by Ames' navigator, Case (Natalie Martinez), who reveals that she was instructed by Warden Hennessey to help kill the first Frankenstein as it looked like he would win and achieve freedom.

Armed with this information, Ames has no intention of allowing the same fate to befall him.


In order to add a bit of spice to the proceedings, the Warden has commissioned the building of a secret weapon, the Dreadnought, which is revealed in Stage 2 of the game as an 18 wheeled tanker fitted with 'Ben Hur' style wheel slashers, flamethrowers and heavy gauge guns.
I felt the movie really came alive at this point, as not only did the drivers have each other to contend with, they also had this behemoth filling up their rear view mirror.
However, if there's one thing that unites rivals, it's a common enemy and with a bit of collusion the Dreadnought is de-commissioned.
“Now that's what I call entertainment!” quips Ian McShane's character, Coach, as the Dreadnought explodes.
He had all the best lines in this movie - and the close-ups.


I won't reveal the ending, but it's pretty cool.

'Death Race' is an all action, high revving, often very violent movie that would go down well after a curry and a few beers to put you in the mood. It's a testosterone fuelled extravaganza that will have you on the edge of your seat during the race and there's enough plot and character development to make you cheer on the 'good guy' so he can wreak his revenge on the wicked warden and get back home to his baby girl.
But will he?