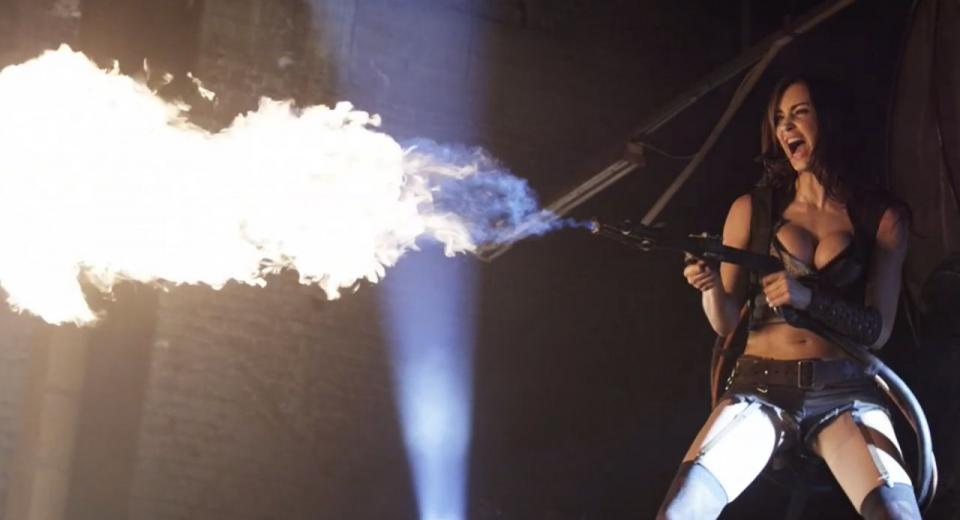 Death Race 3’s digitally-shot HD transfer is really very good, particularly considering the low budget nature of the feature, and its straight-to-video release. Indeed the UK Region B-locked Blu-ray release boasts a strong 1080p/AVC-encoded High Definition presentation which, whilst certainly not demo quality, is also remarkably hard to fault. Stylistically, Death Race 3 doesn’t come close to the slo-mo low budget majesty of Death Race 2, and the presentation can do little to make up for the fact that, this time around, the film simply does not have any visual panache to it; but in technical terms, it is still a solid offering.

Detail certainly benefits from the digital cinematography, with skin textures, fine object and background detail standing out throughout; and occasionally even showing up the low budget locale and sets. There are no significant digital defects from the primary shoot, although some of the stunt shots (including POV shots taken from a wide, almost fish-eye lense) do tend to distort and present minor artefacting and a slight degradation in quality. These are, however, the very brief exceptions to the rule, and I suspect the director would argue that they only add to the gritty feel to the production, however much they drift in the general direction of cheap video-documentary shots. Similarly the colour palette suffers from stylistic choices, leaving it stripped of any vibrant, vivid tones, and left wallowing in the muted desert landscape amidst a slew of dusty yellows, browns and greys, with little to stand out amidst them. Black levels aren’t perfect, but do the job fairly nicely, which is certainly what you can say about the whole video presentation; a solid, strong offering which suffers far more from the inherent limitations of the material itself than from any technical defects. The accompanying DTS-HD Master Audio 5.1 track arguably suffers slightly more from the issues with the source material itself – whilst ostensibly a decent enough audio accompaniment, there’s no doubt that the filmmakers intended to make Death Race 3 a noisy, in-your-face affair, and the result is not particularly easy to endure. Technically, it is as strong as the video presentation, boasting keen dialogue presentation, noticeable prioritisation of the effects, and more than ample support of the score, but it’s that final element which threatens to upset the balance to the whole thing, and ends up bringing down the final score. Gunshots – not as penetrating as on either of the previous two outings – and occasional, largely disappointing explosions ring out across the array, pulling in a hefty amount of LFE support, and rumbling beneath you satisfyingly. Roaring engines; shouts and screams – everything pounds out at you, directionally observant but also often all-encompassing. But the score seldom lets up, and it can be utterly overwhelming, acting to its own disadvantage, and leaving you beaten into submission. It threatens to turn into a relentless cacophony, and it’s impossible to regard this as anywhere near a demo quality presentation, such are the inherent side-effects of having such an overpowering rock offering. Again it should be noted that we get the Uncut version of the film here, equivalent to the ‘Unrated’ version available in the US. Indeed the extras for both the UK and US release are pretty-much identical, and follow the same format as the extras provided for the first prequel, Death Race 2, i.e. they’re pretty impressive for a straight-to-video release!

Director Roel Reine gives another Commentary offering, which seamlessly flips between recounting the technical and trivial exploits of the filmmakers during the production of the film, whilst also incorporating plenty of Reine’s own personal insights into how to make a low budget feature. Although budding first-time filmmakers will probably be more likely to take advice from the Commentary he provided for Death Race 2 – as that was actually a good movie – there’s plenty of good stuff here too, and Reine is often quite honest about the difficulties inherent to a low budget feature, however much he thinks more of his work than even his fans likely would.

A brief Alternate Opening would have probably been slightly better than the final version chosen, although it is easy to see why it was removed as it does betray the film’s low budget status all too quickly. It sort-of follows the same format as the start to Death Race 2.

A decent selection of extra scenes, some of which could have easily been left in to make the main feature slightly more satisfactory in terms of runtime (as the previous two films were). Largely just minor additions, there are a few welcome character beats, although nothing that would have obviously saved the piece.

Again, in a similar format to the extras on Death Race 2, we get a montage of unused footage culled together into an easy-to-digest spread, that offers up some interest additional stunt shots which could have easily been incorporated into the final film, were it not for the slight digital tweaks that would have had to have been imposed (removing stunt lines and obvious shots of dummies probably cost more than just cutting the scenes).

The Making of Death Race: Inferno is an 11 minute behind-the-scenes Featurette which offers up some background into the production. Shot primarily on location we get lots of cast and crew interview snippets and a brief look behind some of the stunts and key sequences.

Racing for Death takes 6 minutes to look further into the stunt and race sequences involved in teh film.

Art Imitating Life: Goldberg is a strange additional 5 minute Featurette which attempts to draw parallels between actor Danny Trejo’s personal history in prison and the character he portrays here. Certainly the guy clearly has real-world experience of prisons and being in a gang, but I’m not entirely sure this film was the perfect choice to look further into that!

The disc is rounded off by some Trailers and Previews.

Death Race was big, dumb and reasonably good fun. Did it warrant two prequels? Probably not.

Surprisingly, though, the first prequel – Death Race 2: Frankenstein Lives – stood out as one of the best straight-to-video releases of all time. Unfortunately, despite the fact that almost all of the contributing cast and crew members have returned to make this follow-up – and in spite of the fact that the story itself is ostensibly strong enough to make for a decent addition to the series – Death Race 3: Inferno is disappointingly poor.

The cast try their best with the limited script and almost non-existent character development, but it’s all a bit of a lost cause when the action itself is so poorly executed, captured, and edited. It’s just about the only thing you have to get right in a movie under the ‘Death Race’ moniker – you need a good race, with plenty of vicious deaths along the way.

This Region B UK Blu-ray boasts very good video and solid audio, let down only by the incessantly loud score. It holds the same fully uncut version that is promoted as ‘Unrated’ in the US, and also comes with the same surprisingly broad spread of decent extras.

If you enjoyed Death Race then you should definitely try out Death Race 2 – I’d recommend it as a blind buy in fact. If you get along well with Death Race 2 then you should certainly consider renting the third one to round out the story-arcs for the characters introduced in that first prequel; just don’t expect it to be anywhere near as good. If you’ve never seen Death Race 2, however, or you’ve never even seen the 2008 Statham vehicle the spawned these prequels, then don’t touch this release with a barge-pole. It won’t make any sense, won’t mean anything to you, and won’t be an enjoyable watch in any definition of the word.