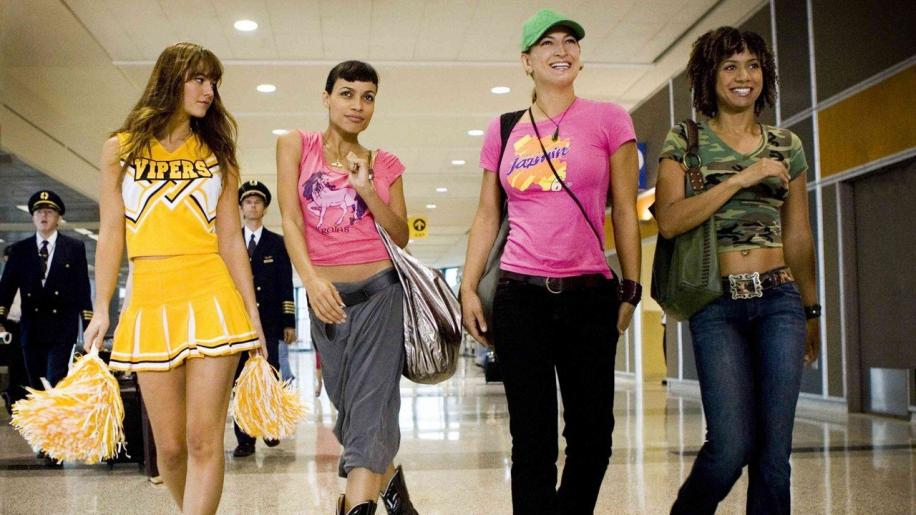 Quentin Tarantino, the most respected plagiarist among writer/directors (unless you consider Lucas, but then again he's probably not) should really be given credit for populating his homage/collage movies with some truly and refreshingly unique dialogue. He has taken small-talk to a new level, establishing his characters largely through portraying them having genuinely riveting discussions about nothing. They talk about Madonna, the possibility that sewer rat might taste like pumpkin pie, or why Superman is an unusual superhero, and Tarantino always seems to make it interesting, involving and almost vital to the narrative. His movies would be nothing without the dialogue. His last effort (not withstanding his ostentatious Dirty Dozen remake in the works, Inglorious Basterds - can't he spell?) was the ill-conceived, poorly received Grindhouse double-feature, where he reteamed with his brother-in-arms Robert 'Sin City' Rodriguez to give us not one, but two movies, back-to-back. It was a bad idea. Nobody really wanted to invest their money in three hours' worth of intentional b-movie, ace dialogue notwithstanding. The results were so bad that the movies were split and re-released separately, and now they even come to us on Blu-ray in their individual forms. Death Proof was Tarantino's baby, written and directed by him, and as such, I think it was the superior of the two movies. But was it good, even in its better-received standalone format?

If you know nothing about the story then it is quite difficult to do it justice without giving away anything so, at this point - if you're tempted - skip to the end and figure out if you want to give it a try. You've been warned. Death Proof is effectively a two-part story, each individual arc itself having the usual three acts you would expect in a narrative. Both tales centre on the character of Stuntman Mike, who is, erm, a stuntman. He drives a death-proof car, so called because it has been modified by a stunt team to be virtually indestructible in a crash (or at least guarantee to leave the driver intact). After following a group of partying girls as they drink and drive from bar to bar in Texas, he insinuates himself into their colourful evening with totally unexpected consequences. Cue stalking, screaming, lap-dancing, car crashes and engaging dialogue aplenty.

Death Proof is almost classic Tarantino, almost a great movie, almost a 9 out of 10, or at the very least a high 8. The first half is excellently played and executed, building up the characters (although the girls aren't that likeable - massively high-maintenance, prissy and whimsical to boot) and establishing the mysterious Stuntman Mike, who is almost the best thing about this movie. It's got some surprise moments, some twists and turns, and consistently good dialogue to carry you through it all. Cut to Tennessee and the second half starts off well, particularly on this extended Director's Cut which has more character development for the new quartet. It was always a shame - on both versions - that there wasn't more interaction between Mike and his newfound girls, but this was a minor niggle in comparison with my main gripe with this movie. The new foursome is also infinitely more likeable than their predecessors, with arguably the best Tarantino-style coffee-room 'chat' in the entire movie (and perhaps in the last decade of Tarantino's work) as they sit around discussing falling into ditches and justifying carrying around handguns. But then things go awry, and without giving too much away, basically one of the aforementioned individuals totally changes in character and, after a series of implausible scenes, the movie ends in a surreal but still vaguely satisfying way.

Tarantino is clearly a capable writer and director, but his forte is certainly dialogue. And in light of that fact his visual style, whilst distinctive, is often quite imposing and over-the-top. Here the concept was to go for a 'grindhouse' aesthetic - a style of movie of which I know nothing about, suffice to say that it clearly involves poor prints, with plenty of defects, frame slips and a generally cheap feel. For the first half of the movie, Tarantino succeeds in this style, but on a second viewing I have to say that it is just plain distracting and totally unnecessary. Thankfully for the second half he plays it straight and it looks much better. It's no less Tarantino, it's just a bit less gimmicky. Still it's not the biggest flaw in this movie. That, indeed, is the aforementioned climax.

So I should really turn to the actors and characters before I explain fully where it all went wrong. The first set of girls are largely forgettable, Sidney Poitier's daughter (why on earth did he call her Sydney?!) and 24's Vanessa Furlito coming across as the only two that are vaguely memorable (the latter more-so in this extended cut as she gets to perform her slightly lacklustre lapdance). There's also Rose McGowan, on board, although her part in Planet Terror is infinitely more substantial. The second group is much more significant, with the beautiful Rosario Dawson as the most famous of the bunch, and the daughter from Die Hard 4 - Mary Elizabeth Winstead - foxing it up as the 'cheerleader' of the group (who arguably has the most disturbing fate), but the most refreshingly unusual of the group is clearly the real-life stuntwoman Zoe Bell. Bell, most famous for being Xena's stunt-double, is a genuinely tough chica, and gets one of the best character roles in the movie. It is certainly unique to see one of the main stars get to perform quite such dangerous stunts in the movie herself, and it works well as one of the biggest selling points of the affair.

Although arguably the girls in both sections get a lot of screen-time (Tarantino is unabashed about his fondness for these girls and their long tanned legs and sachaying derrieres) the movie is ostensibly about Stuntman Mike and his Deathproof cars. And Kurt Russell is simply perfect in the role (although I believe Mickey Rourke was once considered for the role and would have, no doubt, done a pretty damn good job), coming across as a mysterious but charismatic stranger who clearly has an agenda. He's tough, sadistic and pretty disturbed, and makes for a great character, a real serious threat. The trouble is, for a guy who has intentionally busted himself up on many occasions (broken this, broken that) and must - by definition - have obtained a tolerance for pain, and certainly no fear of it, the end just doesn't make any sense whatsoever. It's like Tarantino got really really wasted and just threw the character dynamic out of the window, substituting instead someone not wholly unlikely Ash out of the first one-and-a-half Evil Dead movies (in other words a really irritating, whiny wimp loser). Equally his car appears to get slower and weaker as the scenes progress, which makes just as little sense. I know perhaps Tarantino was going for a slightly surreal finish (in which case he definitely succeeded) but I just have to wonder how much better the movie would have been had he played the ending straight. Just maybe a few less Harvey Keitel moaning moments for Stuntman Mike and things could have been perfect. If you watch the movie, you will see what I mean, and it does not get any better on a second viewing. It is, without a shadow of a doubt, the biggest flaw with this engaging thriller and a real blemish when you consider that this could have been up there with Tarantino's best.