Death at a Funeral Movie Review 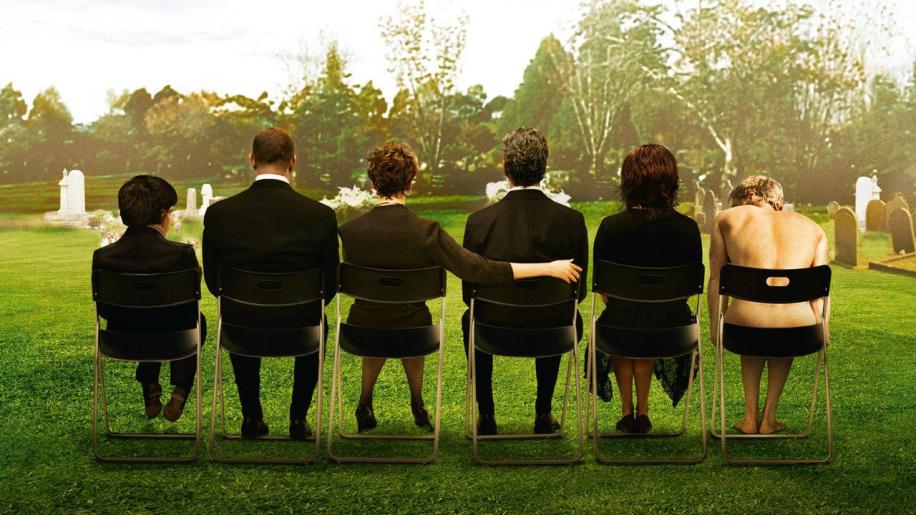 Chris Rock is a highly rated stand-up comic and star of such films as Lethal Weapon 4 and Bad Company. Martin Lawrence has done a fair few comedies himself, in a career that peaked with his two Bad Boys entries. Danny Glover's proved his worth in no less than four Lethal Weapon action-comedies. Zoe Saldana's currently the next big thing thanks to Avatar. James Marsden was Cyclops in the X-Men movies. Tracy Morgan found success opposite Bruce Willis for the Kevin Smith comedy Cop Out. Columbus Short was most amusing in the underrated actioner The Losers. And Luke Wilson was quite good in both the Royal Tenenbaums and Legally Blonde (don't even talk about the sequel!). Phew, and then there's Keith David, from Chronicles of Riddick and Marked for Death, and Ron Glass, who was a stalwart member of the Firefly crew, and subsequent star of the movie spin-off Serenity. Wow. Oh, I had better also mention Peter Dinklage, who's been in a whole bunch of stuff, and is most well known for his rather diminutive stature. I think that just about covers them all. I'm sure I've missed a few. So, what do you think of that cast? Isn't it insane just how many comedians/comic actors/comic support actors they have involved in one project? How on earth could it fail? Um, well clearly very easily.

Death at a Funeral 2010 should not be confused with Death at a Funeral 2007. It's a remake, a scene-for-scene remake, and the only real difference I can see is that they've basically substituted all the white actors in the original for black actors, also swapping the token black actors from the 2007 film for the token white guys in the remake; oh and keeping the dwarf the same. As in, exactly the same actor in the same role in both movies. I can hear many of you asking 'why?'. Well, surely it's obvious. To make money from old material. Sure, the remake is designed to appeal to a different audience but, really, in this multicultural modern society - when we're only a few decades away from being pretty indiscernible when it comes to 'pure blood' - that isn't enough of a reason. Well, how about the fact that the original 2007 film was a British comedy? You know us Brits and our strange sense of humour! Definitely leaves room for an adaptation with a more American-friendly twinge. Still not a good enough reason? Ok, um, what about the fact that none of the guys involved in the production have had a real hit for quite some time? Ah, we're talking money again are we? Yup, this production (much like the insipid Adam Sandler ensemble production Grown Ups) is designed purely to attract a wide audience from the numerous names it has on offer, and deliver a cheap and cheerful, short and sweet(ish) film which will leave the majority reasonably entertained. Unfortunately, even though they were only aiming for mediocrity, they could not even hit that.

The story revolves around...um, well, I think the title speaks for itself. There is an eventful family funeral, where a bunch of estranged family members and associated friends are gathering to (attempt to) pay their respects to the recently deceased patriarch. His two sons don't get along - one's a published author, who's arrogant as hell as a result; the other has written a book but just doesn't want anybody to read it yet. The deceased's brother is there too, who is about to get the shock of his life when he meets his daughter's new fella - who happens to be white and also, unintentionally, happens to be on drugs. There are a couple of friends of the family there too, who have to wheel about the grumpy old uncle of the family and ensure he gets to the bathroom on time. Oh and then there's a white dwarf in a leather jacket who nobody seems to know. Family secrets coming out? Of course, all of these 'interesting' ingredients make for a comedic farce that involves climbing on roofs - naked, getting into fights, repeatedly causing the highly strung widow to burst into tears and run off, toilet jokes, flirting with the just-18 member of the funeral group, tussling with a dwarf, knocking over a coffin and, of course, a death...at a funeral. Amidst all of this family secrets come out, bad relations get made worse, lost loves attempt to rekindle their flames, and - hopefully - everybody reaches some kind of happy, satisfactory resolution at the end of it all.

If you can't predict every single thing that happens in this movie, long before it happens, then you basically haven't seen a comedy for 20 years. You don't need to have seen the British original (if you have then, honestly, why would you even bother with this pointless remake?), and even if you're only half-watching the movie whilst doing your nails or the washing up, the gag setpieces are telegraphed in advance. Oh, he's dropped the bottle of drugs. Hmmm, I wonder who's going to pick those up. Oh, they've got a body to get rid of. I wonder where they are going to put it? Oh, there's a strange dwarf at the funeral and he doesn't appear to be related to anybody else...I wonder who he could be. Hmmm. This predictability might have worked in the Carry On days - it might have even been quite endearing back then, because you know what you're getting - but here audiences generally require a little bit more from their comedies. Something more substantial than just jokes about getting crap on your face. Or your wife ovulating and wanting to try to get pregnant on the day your dad dies. Seriously?

And this is coming from someone who actually wanted this film to be funny. I mean, these guys have been funny before. Individually. Sporadically. And I wanted to see them funny again. I really wanted them to have a hit. I think Martin Lawrence is a vital component of the Bad Boys dynamic, and I'd be happy if he and Will Smith teamed up every couple of years for another instalment of action-comedy hijinks (rather than once a decade), but outside of these confines Lawrence is just not very good. Chris Rock? Well sure his voice can grate a little bit, but some of his stand-up routines are excellent. Why can't he get it right before the camera? No, I was definitely all for this movie working out well for everybody involved, but unfortunately it just hasn't. It's a tired routine, a lacklustre script, borrowed material that was done far better the first time round, and a flagging, ageing cast of has-beens who simply can't be bothered to get back on track. There must be some irony in Lawrence playing the arrogant author of a couple of trashy published works, now broke, chasing the underaged skirt, and generally still riding long passed success. Similarly for Rock, playing the family member who has never quite been afforded the respect he feels that he deserves by the rest of the family members. He just wants his work to be taken seriously.

Oddly, in this whole mix, a couple of things work. Columbus Short is excellent. I hated him in Armoured, where he took the lead in what was nothing more than a Seagal-style z-movie pretending to be something of class. But I loved him in The Losers, where he was one of the funniest members of the generally very likeable unit. Here he is on absolute top form, and you like almost every frame he insinuates himself into. And Danny Glover's great too. Totally sending up his Lethal Weapon persona, he does grumpy, slightly senile elder of the family extremely well, and - even if you can see the outcome coming from a long way off - his closing scene is still one of the funnier moments. James Marsden is also superb. And, again, I absolutely hated him as Cyclops (my favourite of the X-Men characters - seriously, this guy can punch a hole through mountains with his EYES!), and didn't really rate him in anything until I saw a Twilight Zone-esque thriller called The Box, where he was pretty good. In this movie, his character gets some of the wackiest scenes, and certainly provokes a fair amount of amusement - perhaps even a couple of laugh out loud moments (even if they arguably take it too far by the end of it). Hmmm, and that's it. Lawrence is tired, slow and just impossible to like (I know this is in-character, but come on!), Rock takes himself far too seriously - which he's never been very good at, Saldana is one of the least sympathetic characters on board (seriously, could she not have taken better care of her partner after inadvertently drugging him??) and Tracy Morgan gets a couple of nice lines, but ruins the whole thing through one single, horrible scene that involves a stain on his collar for the rest of the movie. Just nasty. Not even Farrelly Brothers funny-nasty. Just plain nasty.

So, is there enough for you to enjoy this movie? Not really. It's the kind of thing you'll be happy enough to dip in and out of when it's eventually shown on TV. Seriously, I think you'd be disappointed if you rented it and sat down to watch this on an evening. Any evening. Even a really boring evening. I know that humour is subjective, but I'm sure there are plenty of better comedies that almost everybody involved has done over the last few years. So go and watch them. Death at a Funeral? Well, go and see the original, which was made just a couple of years ago (wow, they are getting super-quick at unnecessary remakes aren't they? What's next? Remaking Superbad with black kids and black cops?). I'm pretty sure that will make watching this movie totally redundant. And you'll enjoy it more. Guaranteed. This one gets stuck next to Pink Panther in the ever-growing pile of remakes-that-should-never-have-been-greenlit. Disappointing.