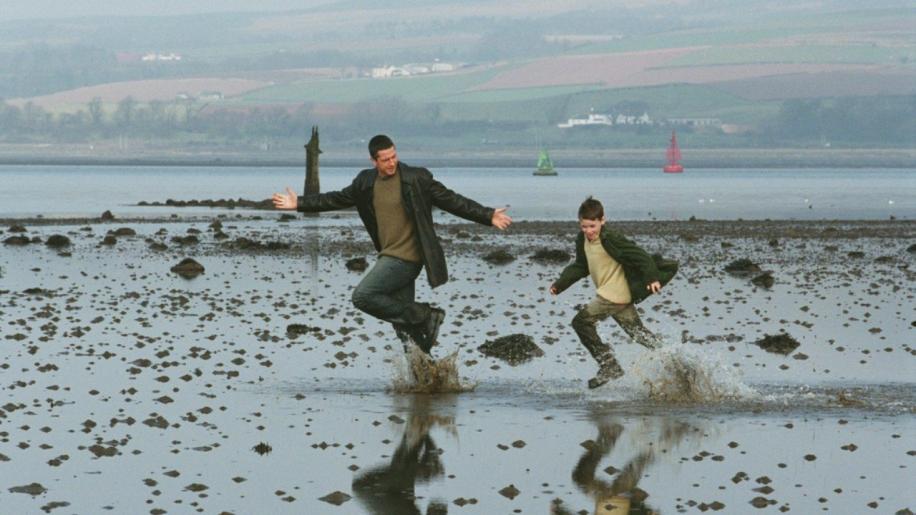 “Dear Da, did you know something? We're moving again.”

When her deaf son makes a bet with the school bully that his estranged father is coming to visit him when his ship docks, single-mum Emily Mortimer has to employ a whole heap of deceptions and schemes to ensure that he doesn't lose his prized set of exotic stamps. Having been supplying nine year old Frankie with the continual lie that his father is away at sea and even writing him bogus letters with tales of foreign places and exciting voyages - hence those stamps - she has just been protecting the boy from the rather more unpleasant truth about his dad. But now she needs someone to actually pretend to be this fictitious seafarer just for a day, not only to convince the bully, but to give poor young Frankie a face on which to cling his dreams and yearnings upon. In desperation as the big day draws near, she turns to a complete stranger, played by Gerard Butler - whose name we never find out in the film - and offers him payment just to pull off the scam.

“Watch what you say in front of him - he's a champion lip reader.”

Whilst Shona Auerbach's slight, but moving, drama is highly implausible and full of plot-holes, a clutch of exemplary performances, coupled with a sentimental, though blissfully saccharine-free script from Andrea Gibb and a pleasantly restrained directorial approach, see that most of these inconsistencies are washed away. The stark and bleak Scottish locations and sometimes drab settings actually work in the film's favour, helping us to focus purely on the drama and emotions played out amongst the overwrought and anxious grownups and the ridiculous, yet heartrending dilemma that they face. Actually, it is quite refreshing to see the adult performers not being upstaged by the child actors for once. Not that young Jack McElhone is in any way an under-achiever. His character is alone, yet never lonely, achingly vulnerable but never feels victimised, full of pent-up emotions yet admirably restrained, locked-in even, his face never betraying the wants and needs that other child actors might have been tempted to show full-force. His world might be a quiet one but his dreams are full of adventure and passion, revolving, of course, around a father that he has, luckily, no visual memory of. The decision to hold his emotions in check is the ace up the film's sleeve, of course. It would have been so easy to manipulate the hearts and tears of the audience with the plight of young deaf boy who just wants to meet his daddy, but Auerbach cleverly foists the angst and trauma upon the adults and their reaction to the situation and it is here where the film really shines.

“I was looking for a man. A stranger. No past. No future.”

Emily Mortimer works wonders as Lizzie. Attractive in a girl-next-door kind of way, she nevertheless convinces in the role of a struggling single-parent. Constantly having to up sticks and relocate for fear of Frankie's abusive real father catching up with them, she avoids cliché with a heartfelt and realistic portrayal that invites sympathy and understanding. Despite the slightly bizarre premise, she is only doing what any mother would try to do, given the circumstances that she, herself, has unwittingly created. Her own loneliness actually underlines the entire drama, yet the clever screenplay rarely makes an issue of it and her scenes with Frankie are honest and skilfully handled, compelling without ever resorting to histrionics. Her scenes with the stranger appear far less powerful on the surface, but upon closer inspection these downplayed moments are quietly revealing. Check out the long, lingering silence between the two later on, after Frankie has gone to bed.

Gerard Butler (the new Phantom Of The Opera) is the revelation though. As the stranger with the requisite lack of past or future, he simply excels. When we first meet him he is brusque and reluctant, a tough guy of few words. We don't trust him any more than Lizzie, or her own very protective mother, does. Surely he's only in it for the money, but even then, what kind of man would undertake the task of being a strange boy's dad for a day? Yet, hang onto your heartstrings, folks, because the two major lump-in-your-throat moments come courtesy of Mr. Butler. That the pair bond almost immediately and the stranger even grows to love Frankie, comes as absolutely no surprise, but it's the beautifully structured manner in which this happens that makes the difference. Skimming stones across the sea, racing on the beach, walking along the promenade and even just buying a plate of chips - it should all be too obvious and corny, yet it is played with a reserve and dignity that allows the sentiment to slowly seep into you without a hint of contrivance, tricking that cynical exterior you might have. The older I get the more susceptible to tearjerkers involving children I have become (don't get me started on A.I.) but here I found that Auerbach has totally avoided the heavy-handedness that film-makers normally rely upon. As great as Finding Neverland was, it still depended very heavily on moppets crying to elicit the requisite responses from us, yet Dear Frankie reaches similar moments of chin-wobbling grief by shedding hardly a tear, or even, for the most part, exposing any really overt emotion. Witness the handing over a home-made carved seahorse (Frankie has developed an interest in marine life thanks to all the letters he has received from distant shores) and feel something clench inside you. Butler's eyes convey it all - the chink in the armour, the decency and sensitivity that he has had all along and we were too suspicious to notice. Or the initial hug that Frankie gives him. We know the lie and the deceit, yet that single embrace means so much because it is given in pure innocence and out of the need to believe. Well delivered scenes like these caught me, at least, off-balance.

“Trust me. You have to trust somebody, some day.”

That there will inevitably prove to be a snake in the grass is a given, but here again, Auerbach plays it gently and never pushes the obvious buttons. Maybe there's one or two coincidences too many and the ending may smack slightly of whimsy, but overall, Dear Frankie was a breath of fresh air. Containing some wonderfully underplayed performances that aid the emotion to drip-feed through for a longer-lasting effect, Shona Auerbach has delivered a movie that packs emotion neatly and quietly. Measured, low-key and well intentioned. A definite heart-warmer.