"From the studio that inexplicably sewed my mouth shut the first time around comes..." 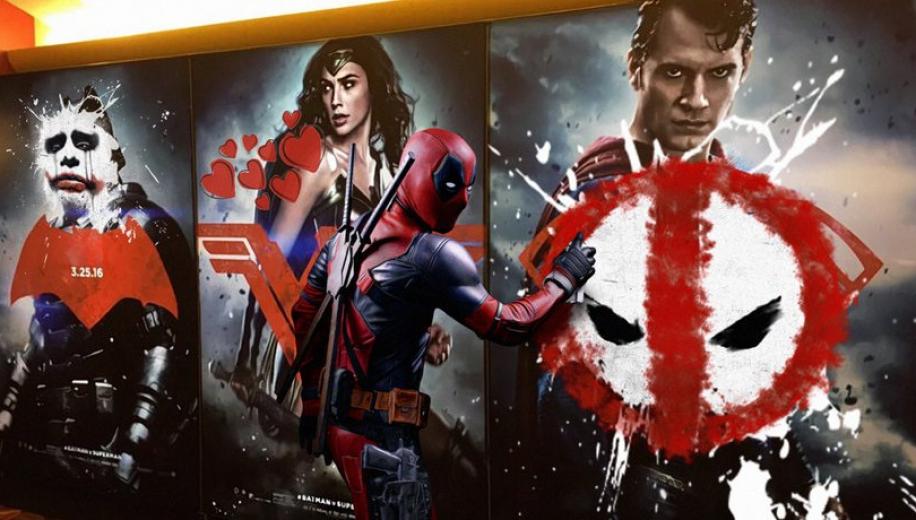 Extreme and extremely funny, the unapologetically NOT family friendly Deadpool is not to be missed, redeeming both the character and the actor playing him after their flawed first time around.

One step away from crowdfunding, the path to the realisation of this left-field, R-rated, comic book superhero gem is the stuff of dreams for fans of the character (and still gives us hope of a Dredd sequel). Originally tipped to go into production for New Line, soon after their success with the similarly violent Marvel entity, Blade (and courtesy of the same writer/director, David S. Goyer), Deadpool sat in development hell for some 15 years, during which time it was passed to 20th Century Fox.
Fox nearly destroyed any chances of this movie coming into existence by introducing the character in the messy 2009 flop X-Men Origins: Wolverine where the notorious 'merc-with-a-mouth' was rendered mute, of all things. Nonetheless determined star Ryan Reynolds and VFX artist-turned-director Tim Miller (eager to make this his directorial debut) campaigned for 5 long years to get this puppy financed. And you know what it ultimately came down to? Some leaked test footage which set the internet ablaze. Chopping back and forth in time with stylish enthusiasm, Deadpool throws us right into the sequence that kick-started this affair (albeit recreated), before playing out the events that led to this place - mercenary Wade Wilson, facing death, has to give up his life, and his (insanely hot) love, in a desperate bid to cure the disease that's riddled his body. The process, in typical Marvel fashion (albeit far more unforgiving and gruesome) sees him gaining super healing powers, but also being horribly disfigured. Reluctantly donning a superhero outfit, Wilson takes to the streets to protect his former love, find a cure, and get revenge, but mostly to face the camera and crack wise with gleeful abandon.

Effortlessly blending fourth-wall flippancy with comic book superhero insanity for grown ups, Deadpool is wondrously self-referential, self-aware, subversive and pop culture-tastic, taking down everything from the film that nearly killed this potential franchise before it got started to the film that nearly killed Reynolds' career, whilst somehow - impossibly - managing to squeeze itself into the same X-universe that Singer's excellent Days of Future Past retconned just so the world in which these characters all exist could finally be set right. Reynolds owns this character, and it's a role he was simply born to play. He may not want to ever play another comic book character ever again, but if this does as well as it deserves to, he'll never have to.


Forget what you know about the character from Wolverine; forgive what Reynolds did with his other big superhero outing, the abysmal Green Lantern. Deadpool is a whole lot of excellent.

It's bloody - in the extreme - and crude - in the extreme - with f-bombs galore and (often hilarious) sex and nudity. It feels like it might have come from the same wonderful world in which Mark Millar's Kick-Ass and Kingsmen exist, yet at the same time almost makes them feel slightly restrained, with improvisational insanity (the quickfire wit may not always hit the mark, but the jokes keep coming too quick and too thick to fail to generate laughs) and wild wackiness keeping you even more entertained than all the lopped limb kebabs and slo-mo head-shots.

Whilst the best comic book superhero movie you've ever seen may still feel like gut-reaction hyperbole (there's room for improvement on the villain/plot front, but they'll fix that in the sequel), for what's essentially a fan-driven superhero flick made amidst Marvel Mega-busters for a comparatively low budget $50 Million, it's an indisputable gem. Certainly it's easy to see why the best Marvel superhero movie is the near-unanimous sentiment shared by those who have seen it all the way through to the end of the end of the end credits. Trust me, you'll just want more. And, hopefully, we'll get more.