"Here's a spoiler alert. You're not a f***ing hero. You're just an annoying clown dressed up as a sex toy." 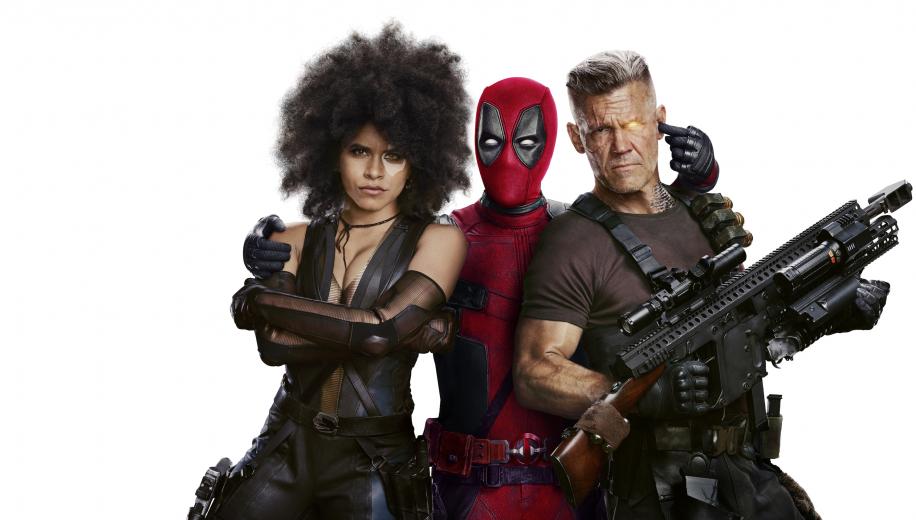 Doubling down on laughs and effects, Deadpool 2 is a superb sequel, enjoying all the irreverent self-aware humour that made the first great.

The Ryan Reynolds-driven sleeper hit Deadpool was a gloriously witty and distinctly adult superhero flick which was so good that it left fans itching for more. It also did stomping Box Office, reinvigorating Reynolds' career and paving the way for the likes of Logan to be made - R-rated superhero movies with an edge. Whilst a sequel was inevitable, it's never an easy thing to accomplish a good sequel, but thankfully John Wick co-director and Atomic Blonde director David Leitch is more than up to the task, taking the mantle after Deadpool's Tim Miller made a much-publicised exit, and allowing co-writer Reynolds to further embrace the character that now arguably defines him and his style of comedy.

Although the plot absorbs a hell of a lot of action movie cliches, it also juggles them surprisingly well, retaining a witty light edge to the proceedings which helps them just about escape the fatal flaw of being completely and utterly predictable (which they are, if you weren't too busy laughing your ass off to realise).

After a tragic loss, Deadpool takes a suicidal course before finding something - or someone - to live for, and forming a team and getting a lot of people dead whilst cracking so many jokes and making so many references that you'd need to watch it at half speed to even get a quarter of them. Inject a bunch of other superheroes into the mix (a few of which will make you raise an eye, a few of which are blink and you'll miss, and a few of which may actually make it to the next movie - the rumour X-Force) and you get an action-packed, but more importantly joke-laden blockbuster that's just devilishly great fun.


So many references that you'd need to watch it at half speed to even get a quarter of them.

After his supervillain-defining turn in Avengers: Infinity War, Josh Brolin is a great addition to the movie. He brings a Clint Eastwood squint-and-growl-through-gritted-teeth that is so at odds with the unstoppably sarcastic Deadpool that the mix actually works brilliantly. Apparently the model for the two characters was Nick Nolte and Eddie Murphy in 48 Hours and they absolutely nail that. Zazie Beetz is also a fun addition as the impossibly lucky Domino, but this is still ultimately Reynolds' baby and, as you can tell just from the closing stingers, some of the funniest bits are just Reynolds poking fun at Wolverine, Green Lantern, Canada and himself.

Of course any sequel was going to struggle to keep up the fresh feeling of the original and, no matter how hard it tries, Deadpool 2 fails to be an exception to that curse, with that dread predictability creeping in, and even - say it's not so - a few moments where it feels a little flabby. It's so ingenious in the way that it makes seemingly conventional grand action setpieces feel new and different, so clever in wit and self-awareness, and so packed to the gills with pop culture references that you can forgive it any faults, but that doesn't mean that it's the leanest shark on the block because it isn't.

Ultimately it'll bowl you over with a stomping final act, and a laugh out loud coda, covering up anything even approaching a flaw and helping it graduate into the mantle of rare sequels that at least maintain the quality of the original, even if they can't quite beat it.

Deadpool 2 is unfortunately limited by a 2K intermediate, unlike the first movie's outstanding native 4K release, but that's no the end of the story as it could easily follow the John Wick formula of 4K releases, in that the first Wick was afforded a full-fat native 4K presentation whilst John Wick: Chapter 2 was ostensibly hobbled by a 2K digital intermediate, yet managed to look as good - if not better than - the first.

The bigger budget and more polished production should lead to a similar result for Deadpool's sequel, but things are more complicated by the differences between the two different cuts - which not only include additional and alternative scenes, but actually slightly different presentations, with the Theatrical Cut making for a more restrained, often softer 4K look which doesn't immediately stand out against its 1080p Blu-ray counterpart and the Super-Duper Extended Cut thankfully coming in to save the day. It's this that ends being up the standout and largely excellent upscaled 4K presentation on Deadpool 2'sUltra HD Blu-ray set.

Getting past the unexceptional upgrade that the Theatrical Cut 4K disc affords viewers, it's entirely better to focus on the second 4K disc's considerably better 4K presentation. The Theatrical Cut has been graded differently, and softness is clearly more apparent, but the Extended Cut's 4K presentation moderates this down to a warmer look which is much easier to appreciate and not as prone to criticism. It's still an acquired taste kind of 'look' (not wholly disassociated from the style the director adopts for his films - see Atomic Blonde), but it is moderated enough to allow for the benefits of an upgrade to become much more apparent.

There's a notable uptick in fine object detail across the piece, most clearly evident on the clothing weaves and textures, with skin details also better observed. The broader shots pick up on finer nuances too, and whilst it's still not night-and-day different in comparison to the high quality 1080p Blu-ray, it's seldom merely detail and clarity that sets the two formats apart.

Indeed the HDR and WCG improvements are - as normal - where the 4K Ultra HD Blu-ray more readily stands apart, although again even here there's a distinction between the two discs and two cuts, with both elements more sparingly used as a whole for this release, but definitely more prevalent on the second disc's 4K presentation of the Extended Cut, which is apparent right from the early montages, which are skewed to highlight blues, greens and reds in turn, and evident in the high saturation style of the piece, which is noticeably more polished. Cable's energy weapons pop with a nice intensity that exceeds that on not only the Blu-ray but also the Theatrical Cut 4K presentation, and this is just one example of the better resolved contrast too, with stark whites and deep, inky blacks bookending a largely demo presentation that has to be the definitive way to watch the movie.

The 4K release also enjoys an immersive HD audio Dolby Atmos track founded upon an already outstanding Dolby TrueHD 7.1 core which ticks all the right boxes and excels in almost every aspect. It's an extremely fun, fast-paced and stylish movie with a breakneck pace, not least in terms of the quick-fire humour, so the track is unsurprisingly energetic, sweeping you up in the manic maelstrom.


Ticks all the right boxes.

The more extravagant action sequences boasts whipping helicopter noises that sweep across the surrounds, armoured juggernauts smashing down the street, vehicles exploding, energy weapons detonating and super-powered battles galore. It's frequently intoxicating, but even when it's dialled down to the quieter moments, the finer observations are great and get picked up superbly across the array.

Dialogue remains well prioritised across the frontal array, and the entire track is driven and at times defined by a suitably energetic score that keeps the pace, fuels the action sequences and reminds you just how much fun this whole ride is.

Aside from providing both the original 2 hour cut and a 15-minute longer 'super-duper' extended cut (on a separate disc), which home format fans are certainly to get a big kick out of, the 4K Ultra HD Blu-ray release comes with an Audio Commentary (accompanying the theatrical cut) by Director David Leitch, co-writer and star Ryan Reynolds, and the other co-writers Rhett Reese and Paul Wernick. The remainder of the extras are available only on the accompanying theatrical cut Blu-ray (with the super-duper cut Blu-ray also being bare bones).


A plethora of Featurettes.

The Theatrical Cut Blu-ray comes with the same Commentary, but also boasts a couple of minutes of Deleted Scenes, a great little Gag Reel, and a plethora of Featurettes which look behind the cast and characters, with special focus on key characters, the director, alternate takes with observations, and the stunts and bigger setpieces. There's also a 'Deadpool's Fun Sack' addition of random but often funny videos, and some stills. It's a great package.

Deadpool 2's 4K Blu-ray release affords the fabulously fun sequel a longer cut that's well worth checking out (it's a little flabbier but great viewing at home), as well as demo 4K video and Atmos-enhanced audio, topped off with a packed-to-the-brim Supplemental section. Fans of the first film should already have this bad boy on pre-order.