Some people call me the space cowboy 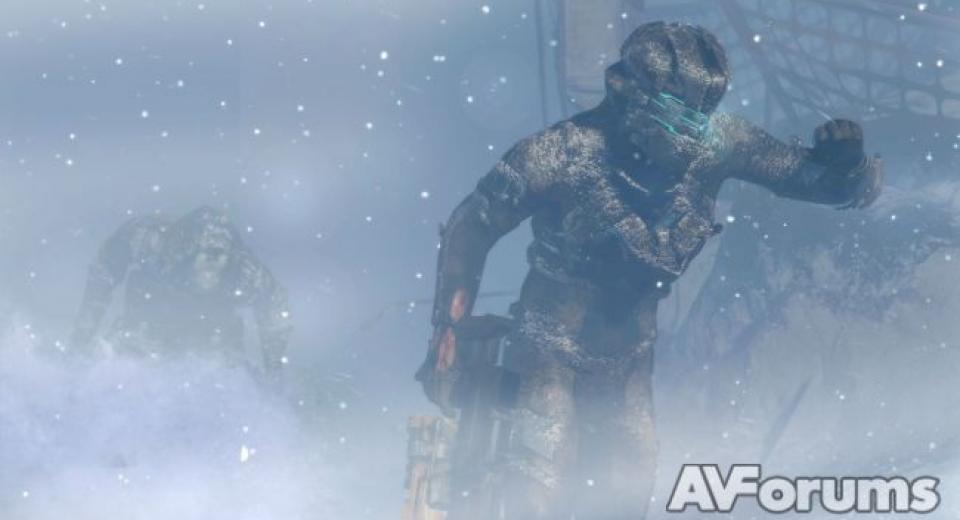 It sucks to be Isaac Clarke. A few years ago he was a just an engineer responding to a distress call from the USG Ishimura, the events that followed changed him forever. An ancient artefact known as "the marker" was unearthed and subsequently began delivering powerful hallucinations and reanimating dead flesh into the grotesque creatures known as necromorphs that quickly infested the ship and its crew. After escaping the hell of the Ishimura with both his life and his sanity tainted by the marker, Isaac was taken to an asylum and experimented on by the fanatical Unitologists who believe the markers exist to bring humanity to the next stage of evolution rather than destroy it. Isaac escapes and foils their plan to create yet another marker but ultimately discovers there are many more than first thought. Months later and Isaac is once again commissioned to join a rescue mission for his now ex girlfriend Ellie, who happens to have gone missing on the planet Tau Volantis which handily turns out to be the marker home world. Isaac is a very different character from the one who first encountered the necromorphs. Where there once was an engineer who adapted his tools and knowledge to survive the Ishimura; reactivating systems whilst turning his tools on the necromorphs to relieve them of their limbs; there is now a soldier. His engineering skills are still on display, missions often revolve around fixing machines or activating a system to advance the plot but in many ways Isaac tends to shoot through his problems now rather than fixing them.

This change is most evident in the new weapon crafting system. The days of playing through the original Dead Space with just your plasma cutter and some clean underwear seem a distant memory. In fairness that option still remains as do other series staples such as the line and force guns, they are just now rolled into an overarching system of crafting which breaks down all the weapons into their components such as frame, upper and lower tools, various attachments and modifiers which can be combined for a multitude of effects. Components for the weapons can be found around the world as well as resources which also contribute to upgrading your RIG (Resource Integration Gear).

There has been some push back against the resource system as players now have to option to part with real world cash via micro transactions to obtain resources rather than using in game systems such as small bots you can send off to do the scavenging on your behalf. It's entirely optional and is not at all required to complete the game. It's merely a short cut around the exploration, personally that exploration is part of the experience I enjoy, but if you don't think EA have enough of your money and you need to craft that acid laced force gun right this minute then the option is there. Overall it's a flexible system which allows for some interesting experimentation, you can pimp out your original plasma cutter with a rapid secondary fire, create a rocket launcher with a force gun attachment, or if you are so inclined construct standard versions of what we recognise as shotguns and assault rifles. Die hard fans still have the option to continue with the standard series offerings whilst there are many new combinations for those that want to mix it up a little. The main menu gives you the opportunity to test out your creations outside the game environment which becomes extremely useful, creating a weapon and then discovering in the midst of combat that it isn't fit for purpose is almost as annoying as the trip back to the nearest bench to modify it.

You might however want to pack one of those standard assault rifles as you will be fighting more regular human enemies than ever before; more times than I would have liked I stumbled upon an area of chest high walls and was subjected to the standard cover based game play I would expect from any other 3rd person shooter. These are the moments when Dead Space 3 is at it's worst; emulating a gameplay style which has never been part of the series and does nothing but water down what sets it apart from its "pop and drop" brethren.

What you might recognise as classic Dead Space does still exist, all the familiar enemies return to jump out at you when you least expect it and crowd management continues to be the first order of business. The once vaunted dismemberment strategy has taken a back seat however using your stasis and telekinesis powers together with whatever contraption you have constructed to keep the groups of enemies at bay is still fundamentally enjoyable. Boss battles are still a weak link with the pattern recognition and glowing damage areas standing out as a clunky throw back to end of level bosses of old which provide more annoyance than they do challenge, no matter how spectacular they may be presented. Dead Space has always been a beautiful game, vistas on Tau Volantis and the space walks still provide some jaw dropping eye candy that manages to eclipse anything seen in the series up until this point. The information which traditionally would have formed a standard HUD is still elegantly integrated into Isaac's suit, allowing them to keep you locked into the experience, rarely pulling you out of the world between the cinematics and occasional loading screens. Sonically it provides all the ambience required to raise the hairs on the back of your neck when stalking through dark environments while the screeches from emerging enemies bounce around the 5.1 soundscape.

While other games seek to break up their mundane gameplay; Dead Space 3 appears to do this far more than is necessary. I would long for an extended period of solitary exploration only to be continually forced to take part in new mechanics that have been shoehorned into the gameplay. Rappelling sections proved particularly frustrating as you control Isaac scaling or descending a cliff face whilst avoiding falling objects and dispatching enemies along the way. Similarly in the latter part of the game you encounter an unlocking mini game which is so easy that it becomes clear that it must only exist to hide load times.

Thankfully some of the series' best elements also return, space walks are criminally few and far between but are still as spectacular as ever. When you are allowed to push off into the void of space you are left to explore a floating sandbox where you can spend as much time soaking in what has always been one of the pillars of the series. The Iron Man-esque flying sequences also return but rather than being a neat surprise they are simply now another cog in what has become a rather unwieldy machine. The new additions to the formula are constructed well, what's questionable is whether they bring anything to the Dead Space experience or simply detract from it. Unfortunately most of them fall into the latter category and the lengthy 12+ hours campaign compounds the problem turning it into a grind well before the halfway point. The latter third cranks up both the difficultly and the frustration until the climax which continues the modern trend of trilogies delivering extremely disappointing and somehow even more ridiculous endings.

Adversarial multiplayer has been removed in favour of a co-op friendly campaign, with a second Xbox Live player taking control of Carver, who doesn't even offer up the engineer pretence, he is a straight up Sergeant in the EarthGov forces. Unlike Isaac he is affected by the marker and often hallucinates and sees different twisted versions of environments and events. Extra dialogue and even more optional side missions are also unlocked in co-op. Carver presents a different way to experience the campaign, even if having a friend over Xbox Live cracking wise doesn't enhance the atmosphere, having a companion through some of the more frustrating parts could mercifully reduce the amount of times you have to watch the gruesome death animations

Mechanically Dead Space 3 is an excellent game, giving all its AAA peers a run for their money in both the audio and visual departments, adding a flexible new weapon crafting system and several new additions to the gameplay. Dead Space 3's biggest problem is a more fundamental issue with trilogies that begin as one thing and end as another. In this case Dead Space was an atmospheric solitary horror game; however it appears to have drifted towards the action end of the scale. From the abundance of new gameplay features to the human enemies and co-op gameplay, Dead Space 3 feels more like every other 3rd person shooter than ever before. This doesn't make it a bad game, unfortunately I'm not sure if that makes it what many would recognise as a true Dead Space game either.  With what feels like a dragged out campaign and an ending that jumps all the sharks, there isn't much to hang on to except the few gameplay moments when the elements which made the series so popular are allowed to shine through, which sadly, isn't nearly often enough.