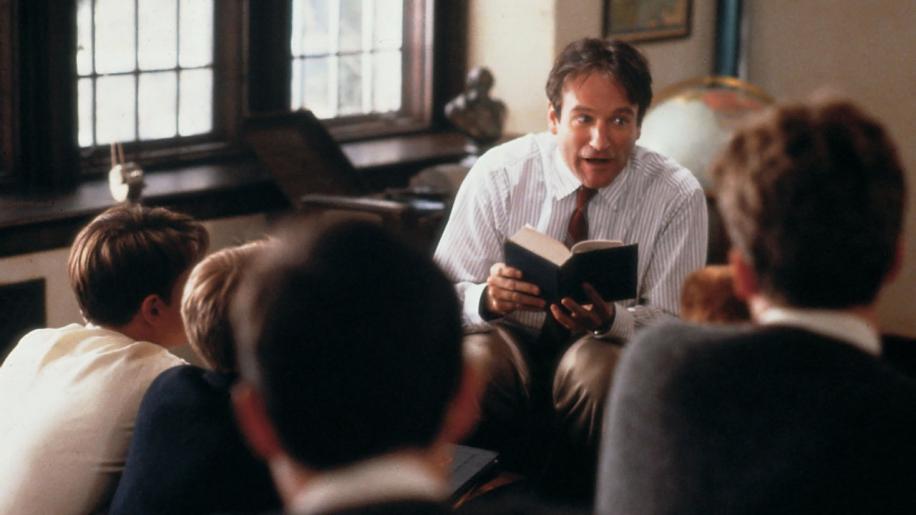 Robin Williams has come a long way since he co-starred in ‘Mork & Mindy’, through his stand up comedy and movie performances. One of the films that contributed to his meteoric rise is ‘Dead Poets Society’ from 1989 and it now hits the home cinema market on American Region free Blu-ray. Indeed, it could be argued that in ‘Dead Poets Society’ we witness his career best screen performance.

This tale of an inspirational Teacher at an American Boys Prep School provided a showcase for Robin Williams’ acting ability as well as his talent for off beat humour and impressions. It was no real surprise to find that a comedian could excel in what was, effectively, a serious role – since comedy is probably the hardest thing for an actor to do. Comedy requires excellent timing, sensitivity and the inner knowledge of what will work for a particular audience. Anyone who can master it can then use what they’ve learnt in other fields.

Over the years we’ve had many movies about inspirational Teachers including ‘Goodbye Mr Chips’, ‘To Sir With Love’, ‘The Pride of Miss Jean Brodie’, ‘Spare the Rod’ and ‘Mr Holland’s Opus’ but ‘Dead Poets Society’ came along when cinemas had been devoid of films on this theme for quite some time. Make no mistake though, this movie could never be described as a Robin Williams vehicle as the mostly young cast deliver strong performances that make it hard for the star to walk away with the movie. As such, it’s a terrific ensemble piece and the real winner is the audience.

So, anyone who hasn’t seen the movie will be wondering why all this wittering. America’s premiere Preparatory school, Welton College, had long been beating the ‘correct’ principles into young boys that would set them up for life. Well to do parents decided their children’s future for them, so many ended up in misery studying subjects they hated. The disciplinarian teachers ensured that the parents’ wishes were fulfilled by encouraging their students to comply. Now along comes free thinking English Professor Keating (Mr Williams), encouraging his students to ‘carpe diem’ or ‘seize the day’ , to indulge in original thinking and to be unafraid of being different. His students are surprised by his unusual approach to teaching, but are impressed that he is a former student of Welton College and was once part of the ‘Dead Poets Society’ – a group who met in secret to ‘breathe life into 400 year old poems’.

Keating’s class decide to resurrect the moonlight meetings in a cave to celebrate the work of the poets and develop as individuals under their Teacher’s unique methods. He encourages them and builds their confidence, but this causes conflict when a student, Neil Perry (Robert Sean Leonard), wishes to pursue an acting career, rather than Law. His father (Kurtwood Smith) can’t accept his choice and forces him to leave the College. Ultimately, this leads to a shocking outcome – which I won’t reveal, as there will be a generation who haven’t seen this movie.

As a piece of casting, Kurtwood Smith is superb as the controlling, overbearing father as he brings to the role an inflexible quality that engenders sympathy for the boy, so we are on his side as he rebels. That’s also what gets the audience in support of Keating and his students – as we all have the gene that wants to stand up for what we believe and sometimes it puts us at odds with society. We respect those who have the backbone to do it and are disappointed with those who simply cave in and comply. Keating teaches the boys to admire those who have dared to be different, but fails to point out that it was often at some personal cost, in his attempts to get his students to be the best that they can be. The story shows that it works for some and for others the result is tragedy.

The film has not lost any of its impact since I first saw it in the cinema at the time of its release. Williams' character of Professor Keating is not the hell bent on conflict irritant he played in ‘Good Morning Vietnam’, though in ‘Dead Poets Society’, he gets just a few minutes to do some of his iconic patter. There is amazing depth in his silence as well as his inspiring speech, almost an internal battle between what life can be and what life has dealt him.

Director Peter Weir is a very contemplative filmmaker, prone to capturing scenery and moments that establish various moods. Many of these very beautiful shots of Delaware in the autumn and winter look downright dazzling on the Blu-ray. In his handling of the story, Weir avoids presenting clear cut answers so the audience has to do its own thinking.

The work of cinematographer John Seale has to be admired here as his lighting helps set the visual mood for the piece. Every shot is well balanced and pleasing to the eye – and the interiors of the College convey the wood panelled austerity nicely.

All in all, ‘Dead Poets Society’ is a movie that I remember for its overall quality –whether that be in Tom Schulman’s credible script, Peter Weir’s direction or the solid performances that make the whole thing work. It’s that old fashioned thing, a ‘well made movie’ that demands to be seen by the current generation on Blu-ray.