The perkiest fighter in town 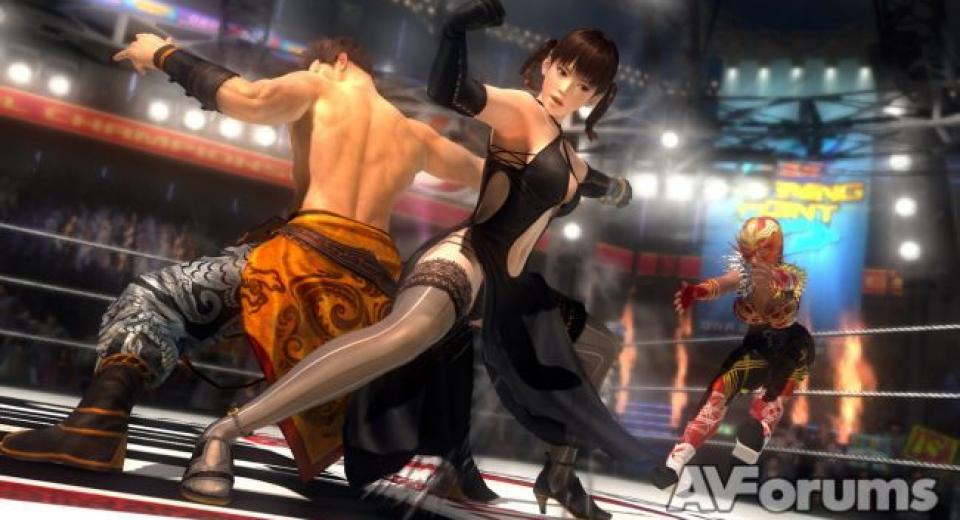 Booting up Dead or Alive 5 might be an exercise in the overly-familiar for many of you invested in Team Ninja’s franchise since the golden era of the Dreamcast, PlayStation 2 and Xbox. From the traditional sea-swept Dolby-esque rising chorus of the splash logo through to a menu screen that overlays its wares on top of a rotating fight stage in the background, DoA 5’s opening gambit is at once cosy but altogether a little underwhelming. Even though series luminary Tomonobu Itagaki left the building shortly after Ninja Gaiden II then, it seems business as usual for Tecmo Koei and a fighting game that has done little to alter its basic formula over the years.
Jumping into the fight, that impression of partially-welcoming familiarity is extended further, and the four-button combat system is immediately as fluid and gratifying as it ever has been. Punches and kicks can be mashed or finessed into impressive combo attacks or countered with judicious use of the hold mechanic, with the fourth button reserved for throwing your opponents. The rock-paper-scissors (or ‘triangle’ in DoA-speak) fighting analogy holds very much true in DoA 5, with hold moves countering strikes, throws countering holds, and strikes countering throws. Newcomers will delight at their ability to hammer buttons for impressive damage, whilst veterans will immediately begin to beat their heads against ridiculously difficult combos like the Izuna Drop.
It’s very much still the same cocktail of reversal-heavy arena-based battles then, with every move able to be countered by players that know what to look for. In that respect, DoA 5 is every bit the skill-based fighter that we’ve come to know and love over the years, and there’s a real sense of accomplishment that stems from successfully anticipating an incoming attack, reversing it and launching a string of unstoppable blows before your opponent can find their feet. Scratching beneath the surface reveals a handful of key changes in terms of mechanics and style however, and they’re almost universally positive additions to the tried-and-tested formula. Chief amongst the gameplay alterations is the addition of a new ‘power blow’, which allows you to wind up a monster attack that’ll launch your opponent end-over-end, hopefully towards one of the many environmental triggers for further damage. It’s a risky tactic and only becomes available once your own health drops beneath 50%, but pulling one off can successfully turn the tide of battle in your favour - and of course they look spectacular in action. Complementing the power blow is a new ‘critical burst’ move, which takes the form of a high-damage strike at the end of an unbroken combo, instantly removing the ability of your opponent to counter and opening them up for a further string of attacks. They are, of course, tricky to implement and master in the heat of battle, but they serve to open up DoA 5 to a greater level of tactical depth.
Perhaps most impressive however, are the all-new arenas. Dead or Alive has always had some of the best multi-tiered stage designs in the business, but DoA 5 makes previous efforts look positively sedate. One particular level sees you fighting in a circus ring complete with flaming hoops and ‘danger zones’ that trigger scripted events like a tiger mauling when you launch your opponent in the right direction. Another stage sees you fighting in a middle-eastern battlefield as tanks, troops and all-out chaos rages around you, whilst my personal favourite sees you fighting atop a wooden raft that can be untethered by powering your opponent into the corner, and which then floats down a raging river to a halt on top of a waterfall. Of course, you can then launch your opponent off that and continue fighting in the jungle below.
Most of that increased environmental drama is in service of the newly revamped story mode, which sees you playing as a roster of around 19 DoA 5 characters in a soap opera-style campaign that weaves back and forth in its timeline with bafflingly bizarre vignettes that serve to set up over 60 tutorial-based fighting lessons. It is, in short, absolutely bonkers - and brilliantly fun. All of the cutscenes are short and pithy, serving to give you quick updates as to whatever daft plot machinations have been set in motion around the newly-reformed DOATech company’s insatiable desire to clone female ninja Kasumi, and more often than not they exist to show you exactly how talented Team Ninja’s artists are at cinematically framing parts of the female anatomy.
And whilst we’re discussing those seedier elements of the franchise, let’s make no bones about it, Dead or Alive 5 is a seriously pretty game - but one that continues the traditional voyeuristic fetishisation of its protagonists to a rather amusing and occasionally strange degree. With the player models altered to a somewhat more realistic styling (in terms of facial features at least), the traditionally accentuated boob-jiggle, lingering camera shots, heavy breathing and overtly sexual loser poses (characters even sweat from every pore in 5) are now somewhat incongruous to the protagonists themselves. Where before they were real-doll caricatures with exaggerated sexualisation to match their source inspiration, now the DoA 5 models exist in that eerie space in-between realism and outright stylised objectification, and that’s a grey area that some folk might find a bit strange to say the least. Sticking very much with tradition however, DoA 5 also contains most of the same core game modes that we’ve seen before. The usual slew of arcade sequences (broken into tiered difficulty levels for each character) are joined by various survival, training, time attack and tag battle options, whilst online play revolves around player, ranked and lobby matches. Beating each of the modes with various characters will unlock new costumes as you play, but there’s nothing to match the player customisation and individuality offered by the likes of Tekken Tag Tournament 2 or Soul Calibur 5 here. You’ve got your preset outfits, a title system that lets you choose two slogans from a list of hundreds that unlock as you progress, and that’s about it.
So if you do plan on heading online for the long-term appeal of Dead or Alive 5, you might be surprised that there’s little in the way of quality in that regard. Player, ranked and lobby matches form the core of the networked offering, and even though the netcode appears to be solid when it works, unfortunately a swathe of false disconnection messages and weird lag timeouts are currently ruining any concerted effort to get into the fight over long or short sessions. Indeed, the game was hanging for around 10-15 seconds when trying to enter any online mode last night (and even some of the offline modes that access leaderboards exhibit the same issue), and try as I might, I was unable to complete any match without being notified that I’d signed out of Xbox Live. I hadn’t, of course, and the rest of the Live functionality was working as advertised.
Looking at the support forums for the game I’m certainly not alone with those symptoms, and it looks as if an upcoming online patch will at least rectify most of those concerns. Even with that in mind however (and delaying our review to try and sample it with the problems resolved), it’s disappointing that the online functionality is in this state in the first place. What’s even more concerning is the dearth of players available in ranked and player matches at present, which is no doubt a result of those extended teething problems.

In a hypothetical world in which the online components and interface hitches of DoA 5 are fixed (hopefully shortly that’ll be the case), it’d exist as one of the best fighters of the year. As it stands however, you have two thirds of an excellent game - but with little reason to continue ploughing into the singleplayer offerings outside of the aforementioned costume and title acquisition. The story mode is brilliant and the gameplay additions in Team Ninja’s latest iteration are shrewd and well-implemented, but overall it’s a product that lacks the customisation options and smooth online integration of a Tekken Tag Tournament 2 or a Soul Calibur 5.

That’s a huge shame, and the lack of online fucntionality is a problem which I sincerely hope is resolved before players flock away from DoA 5’s servers. If it is fixed, I'll happily update the final score with an extra star. As it stands however, DoA 5 is a way short of its true online potential.