A game about zombies for zombies 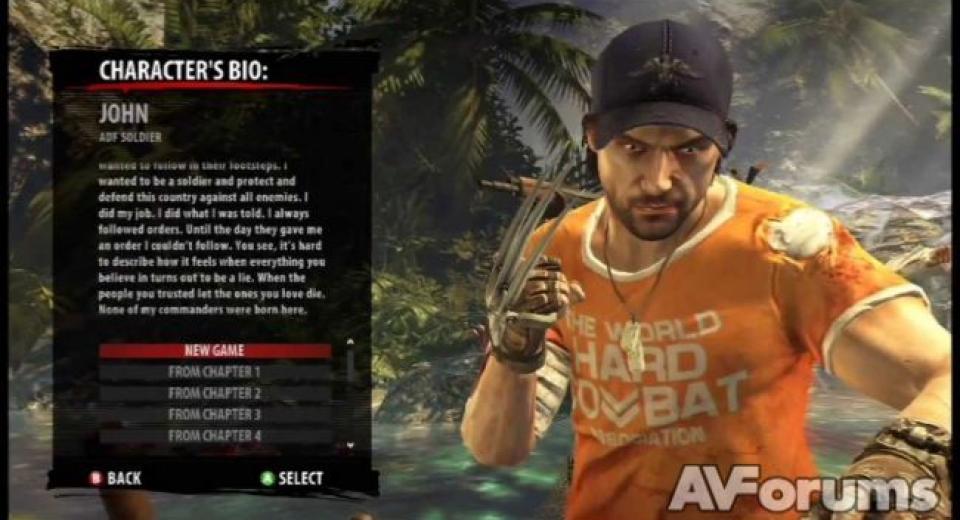 As the four player characters from Techland's original melee zombie fest Dead Island fled the doomed island of Banoi, they no doubt breathed a sigh of relief. Whilst the thrill of decapitating reanimated corpses had its appeal, the endless scavenging for supplies and maintaining weapons had grown old and the finality of boarding a chopper and heading towards the horizon was a welcome sight; not just for the characters but for the player on the other side of the screen as well.

Dead Island: Riptide wastes no time bringing you back down to earth. After a convenient plot-advancing sleep your undead friends are back and you are introduced to your new free roaming environment of Palanai which is incredibly similar to Banoi in more ways than one. Doing a blind play test and dropping a player into either Banoi or Palanai and asking them to determine which is which would be an impossible task; as despite the several years development time there are few graphical improvements to be had with assets seemingly reused with a vengence.

The argument to justify Riptide as a standalone product is wafer thin, wind the clock back several years and this would have fallen squarely into expansion territory. The core experience returns unchanged. You pick a character from the now 5 strong cast of survivors who each have their own skills and abilities. You improve and upgrade these abilities by killing zombies and completing objectives to gain XP.  You're free to unlock your abilities as you see fit choosing from the three skill trees of Fury, Survival and Combat. Fury is a special ability which differs depending on your character traits. My character Purna's ability was the handy trick of pulling out a side arm and dispatching enemies in one shot for a short period, other characters use melee attacks or hand thrown projectiles whilst in Fury mode to similar devastating effect. Survival and Combat break down into offensive and defensive buffs, with Survival offering modifiers such as health and damage boosts or discounting prices at the multitude of stores. Combat focuses on improving the damage and effectiveness of weapons or increasing the likelihood of critical hits and knockdowns. Again each of these skill trees is different for each character and focuses on their inherent strengths, be it with large weapons or firearms. It offers a lot of choice with many of the upgrades having several ranks which continue to improve the skill; however with so many options the improvements become increasingly granular and therefore become harder to notice. Upgrading Purna's critical hit chance from 1% to 3% may sound like an improvement but in real gameplay terms it's simply another option to pour upgrade points into.

All these options sound like they should offer significant replayability or even some tangible variation in the gameplay; however a jump into a different character reveals that while the Fury modes are completely different they are essentially used in the same way as a panic button for when crowd management becomes an issue. The different specialities are a nice idea but don't really change the gameplay as much as intended. It's all well and good my Firearms expert being a crack shot, but when the game withholds all the firearms until a while into the experience my advantage is negated as I am forced to poorly swing whatever I can get my hands on. When it comes down it you will have a few go-to weapons which play to your character's strengths, but sooner or later you will be swinging the closest implement to hand to survive just like everyone else. It's a good thing then that there are lots of objects lying around. Aside from your standard collectibles such as diaries and audio logs Palanai is littered with chests, bins, wardrobes, bags and much more to search. Even the most diehard collectors among us would become fatigued at the amount of potential scavenging on offer here. At some point each player will have no choice but to ignore much of the scattered loot in favour of actually moving through an environment at a decent pace and with your sanity intact. Scavenging does have its rewards, from straight up cash money and weapons to a vast array of miscellaneous items which can be used to craft and upgrade weapons.

Weapon crafting is the other large pillar of gameplay in Riptide, using items found around the island you can modify weapons from their base form to become even more deadly implements. A simple machete for example can be modified with some wire, batteries and duct tape to improvise a butter knife which cuts through flesh much more effectively. Mods are collected in the environment and are a way to keep your weapons choices fresh and deadly. The inherent flaw in this system though is the weapon and enemy levelling.

Each weapon you pick up will be of a certain level and will have the appropriate damage stats which can be improved with skill tree upgrades and mods but will ultimately be out grown by the player. This means you can't get too attached to the super pimped out machete you have become fond of as eventually the level of enemies you face will require a weapon of a higher level for you to be effective. Regardless of the money poured into upgrades and mods every weapon becomes eventually expendable. As a result you are always looking for the next new weapon, searching for components to make it more effective and last longer. Add in the fact weapons degrade and require frequent repairs and inventory slots fill up quickly when out on missions; leading to mid mission menu pondering of what to drop for maximum benefit and the entire system begins to become unwieldy and tiresome. Tiresome becomes a theme as they quickly fall into the same pattern as before with each mission amounting to travelling to a location, picking up/ pressing/ destroying something and then returning for a reward. Story line is virtually none existent aside from the occasional cut scene which ushers you to the next environment. There is almost no motivation to complete extra missions aside from collectibles and XP. The main draw is the combat and even then it is only engaging if you switch to analog controls which allow you  to control swings and target limbs rather than spam generic attacks via button presses. Still, when you have chopped off every limb from a zombie before delivering the decapitation once, then you've done it a million times.

At this point those who played the original Dead Island are probably wondering at what point I am going to tell them something they don't know, whilst playing the game it was hard to distinguish what aspects of this fully priced retail title were actually new this time round. As it turns out that was because there aren't many new aspects to be found. There is a new player character to choose, several new zombie types from those that lurk in water to pounce to an always-a-pleasure-to-encounter grenadiers which, true to their name, throw grenades. The largest significant change in gameplay sees Riptide devouring the rotting flesh of its own genre by incorporating wave based survival missions where you need to maintain and construct barriers whilst fending off wave after wave of biters until you can get back to the free roaming mission design. Beyond these changes, other differences are trivial to the extent they don't offer any real improvement or even difference in the core gameplay.

Dead Island was a fun game to play, turning on analog controls and hacking up zombies with a plethora of constructed weapons and scavenged components managed to make a large portion of the original title enjoyable, unfortunately by the end many of the issues which plagued the game became unbearable and the dull fetch quest design felt unimaginative. Riptide does nothing to change any of this, a new character, a sprinkling of new enemies and a wave based co-op mode do nothing to reverse the downward trajectory initiated by the original title. If you enjoyed Dead Island right up until the anti climactic ending and were left wanting more then this one is for you. Other wise if you must play Riptide share the pain with 3 others via Xbox Live as without friends keeping you interested you'll just become another bag of flesh mindlessly roaming the island.