This island is far from dead... 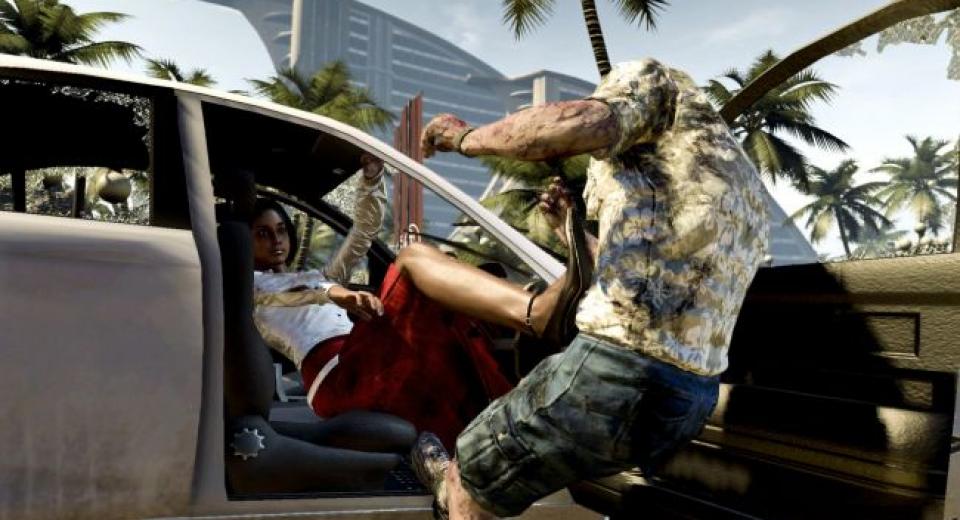 Trends come and go in the games industry but a recent trend is refusing to go away, and that’s the inclusion of zombies within every other game. Ever since World at War’s zombie horde mode other developers and publishers have rode this wave of success and got a slice of the blood-soaked pie.

Since then, the shooter genre in particular has been a breeding ground for such survival modes and now Dead Island has taken things a step further and offers an entire game based around the zombie virus.

Dead Island is developed by the same guys behind the Call of Juarez series, Techland, and publishing duties have been taken up by Deep Silver who have brought us game such as Risen 1 & 2. So with a mixed past, have Techland left behind the weaker games that they have put out and started anew? Dead Island is a first person, free-roaming survival game that has more zombies than you can shake a sharpened blade at. So, what possibly can go wrong?

Well things start to go wrong for the player right from the off; no sooner have they started their journey onto the island of Banoi they find themselves evacuating the hotel they spent the night in after a party that spanned the island. You can guess what the cause of this evacuation is already and you’re right, the undead are to blame. Guided by a mysterious voice from the intercom system, you descend into chaos as you try to reach ground level. After being on the wrong end of a zombie attack, you find yourself awakened by John Sinamoi who believes you and some of the other survivors are immune to the virus which has affected 90% of the island’s population. From here on in, the game takes on a ‘go there and do this then come back for another mission’ format which makes the game feel a little repetitive at times. Granted, this guy saved your life but surely you shouldn’t be left on your own to get things done all the time?

On your travels it becomes apparent that there are small pockets of people stuck fighting off the endless hordes of the once holiday makers. Finding them and helping them out allows you to level up and acquire new items which will help you defeat the tougher enemies you find later in the game.

The game boasts a plethora of items and weapons which you can use in order to take down any enemies who dare to get in your way. You can pick up an oar and whack a zombie in the face with it or hurl a gas canister in their direction; the possibilities are pretty much endless when it comes to disposing of any threat.

The only problem with this is that melee weapons wear out and become unusable far too often, meaning you have to constantly chop and change your armoury every five minutes. This doesn’t seem like a big deal but it’s the last thing you want to do when you’re in the middle of a battle or getting your backside handed to you by a tougher enemy.

Getting your booty handed to you will happen quite regularly too as the melee combat isn’t as satisfying as it should be. It’s very clunky and your character tires out after three swings, leaving you as zombie food. If you can find ammo for them, the guns make short work of zombies who shuffle your way but this is easier said than done. Dead Island boasts a massive island for you to explore with multiple enemies on the screen at one time, so how does it fare? Well you have to admit that it’s not the worst looking game you’ll find on the 360 but by the same token it is nowhere near the best either. The island and scenery look great... from a distance and the enemies and NPCs just look, well, boring. Zombies pop-in at random moments as the game plays catch up and can’t deal with more than ten in one section at a time.

Dead Island carries with it an 18 certificate which, given the gore and sweary nature of all those on the island is well warranted. Zombies are expelled with blood spattering everywhere and limbs flying off left, right and centre. Limbs can be lopped off, bones can be broken and shattered as enemies fall to the ground in a slow motion montage that should satisfy. But with the clunky melee mechanic you never really feel the need or want to celebrate breaking through a flailing arm or turning the sand around into a holiday makers nightmare.

I might be reading too deep into the game here but there are things in there that just do not make sense and make you wonder why you are actually doing what you are doing. Time after time dehydration and hunger are thrown in your face by those who are stranded across the island yet you find numerous energy drinks and food stuffs strewn all over the place. Seriously, it’s like the island is sponsored by Red Bull and Cadbury and wouldn’t let anyone leave their rooms without carrying a full case of each. What’s worse is that you find nutrition in these items to recover yet it seems nobody else will touch them or chooses to ignore that they exist.

The players are offered the chance to play the game as four different characters which obviously gives some incentive to those who have the patience to play the campaign all over again and hoover up loose achievements they may have missed first time around. There’s also a heap of customisable weapons for you to seek out and make too which allows you to be creative in the way in which you plough through zombies. Exploring the island isn’t as easy or exciting as it should be and constantly feels like a chore. You can sprint for very restricted amounts of time but you just don’t seem to make huge amounts of progress towards your destination. Of course, there are vehicles out there which can be utilised to speed up your progress and be used as battering rams to mutilate your foes. The problem with this is that the cars are so infuriating to control that they hold little more than novelty value and can be instantly forgotten.

The game boasts a co-op mode where you can team up with randomers of friends in order to trawl through the campaign and find an end to the horde of undead. This unquestionably makes the game much more enjoyable and more bearable as a helping pair of hands will result in fewer deaths than if you play solo.

What’s more is that this Game of the Year Edition comes with all the added download content that was released after the game’s initial launch. Of course, those who picked the game up on day one will be pretty narked but for anyone who is interested in trying it for the first time will be best getting this edition as it offers huge amounts of value. Bundled is an arena mode where you can face waves of enemies, an exclusive weapon blueprint and a series of missions which were all only available via DLC in the past.

In short, Dead Island could and should be an enjoyable game. An open world setting with hundreds of enemies to kill in as many unique ways is something that appeals to the majority of gamers. The problem is that the mechanics feel tired and the mission structure is far from engaging which leaves you wondering why you are actually bothering to complete them. At the reduced price you can now pick it up for it is worth a cheeky look at, but don’t expect anything ground-breaking in return.

Obviously these sorts of packages carry with them higher levels of longevity yet when it comes to games such as Dead Island it doesn't always seem worth the while when the game isn't as entertaining to play as it should be. You would have thought this type of zombie game would be a hoot yet because of the worn mechanics and repetitive mission structure it more often than not bores you rather than engages you.