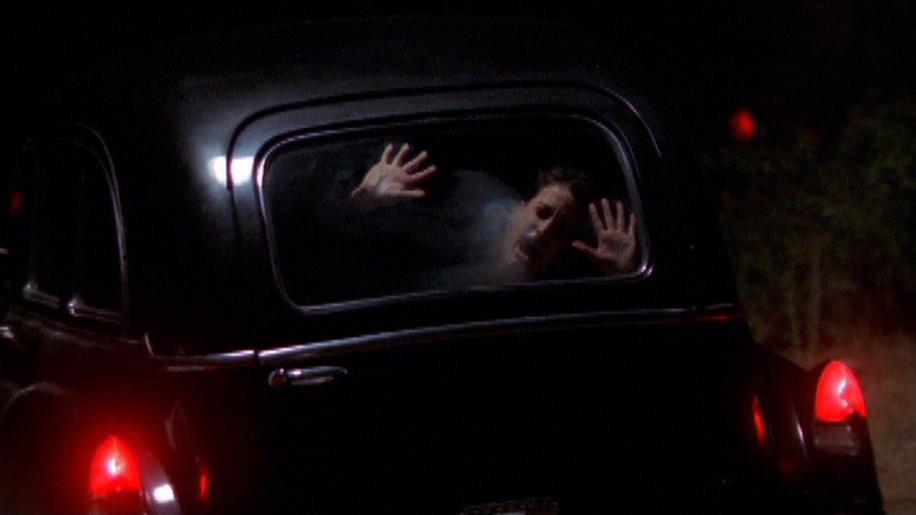 The Blair Witch Project has been responsible for opening the flood gates for a rash of movies along similar lines. Low budget horror, on a tight schedule which plays for spooky and creepy rather than gory, due to the constraints of time and money. Dead End is another in the long line that in recent months has included Wrong Turn and Cabin Fever. The plot is simple. The Harrington Family, father Frank (Ray Wise), mother Laura (Lin Shaye) and children Richard (Mick Cain) and Marion (Alexandra Holden) along with Marion's boyfriend Brad (Billy Asher) are travelling on Christmas Eve to spend Christmas Day with the family. To keep himself from falling asleep at the wheel Frank decides to pull off the highway and travel through the woods. The tactic fails miserably as soon Frank dozes off and the whole family are woken with a jolt when an oncoming car swerves to avoid them and they screech to a halt. Fortunately, although a little shook up, no one seems injured. It's then that the weird stuff begins.

Written and directed by French newcomers Jean-Baptiste Andrea and Fabrice Canepa, Dead End is a wonderful, inventive and tight little movie that lays on the humour as much as it does the horror. The ensemble cast are on marvellous form lead by Ray Wise of Twin Peaks fame and Lin Shaye, a veteran of most of the Farrelly Brothers movies. Indeed if the Farrelly's ever make a horror movie Dead End could well be it. Some of the sharp dialogue is laugh out loud funny, and some of the chills are hair-raisingly chilling. The unravelling of the family unit as the stress of the journey takes it's toll is a joy to watch. There would appear to be more skeletons in the Harrington's closet than running around in the creepy woods. To top it all off a satisfying twist is revealed in the final reel. Dead End reiterates two truths, blood and guts are not necessary to scare in a good horror movie, and quality writing will make most movies watchable. This French due have realised this and produced an excellent, well made and wonderfully acted little horror flick.