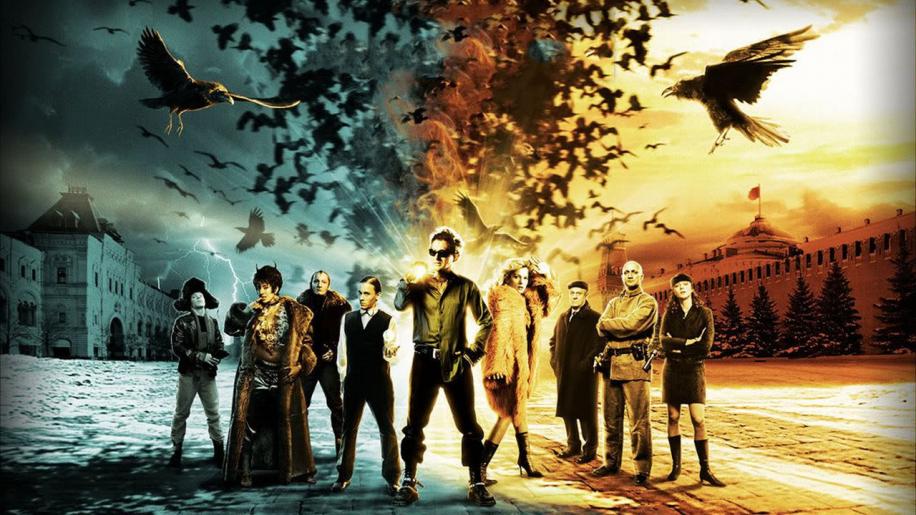 As Andrew Mogford has recently reviewed the Russian sci fi fantasy film Night Watch (a personal favourite of mine that found itself unfairly hidden amongst the plethora of far eastern cinema in the world cinema section in recent years) I find myself only too pleased to write a review of its sequel Day Watch.

Whilst the box says that the film is 139 minutes long, it's actually 146 i.e. the same length as the original Russian theatrical cut and not the US' paltry 132 min. Quite why such a glaring mistake was made I have no idea. Proceedings begin but a short time after the original ended though how long in actual terms we are left to ponder. Given that Day Watch was made a mere two years (2006) after Night Watch (2004) strikes the impression that the gap was always intended to be minimal. Especially when you consider that it's part of the same story that together with the first film covers the arc of the novel they were based upon - unsurprisingly titled Night Watch, merely the first part of a tetralogy of novels collectively termed World of Watchers and penned by acclaimed Russian sci fi novelist Sergei Lukyanenko. Night Watch/Nochnoy Dozor (the book) contained three interweaving stories (the pattern continues the same in each of Lukyanenko's follow up novels) - Night Watch the film adaptation covered the first of these strands and Day Watch completes this narrative by translating the final two to the screen. Thus this is less a traditional sequel and more a continuation of the same story arc. Indeed it could be perceived as more akin to a TV series than other films of the genre that tend to use a collective story from a book/comic as a single film and this isn't far from the truth of its apparent episodic nature. The original Day Watch was all set to be made as a four part mini series for television - it was only the impressive early footage that sparked the executives in charge of production to deem the material worthy of a big screen adaptation.

The back story will be familiar to any who have watched Night Watch or read Andrew Mogford's review of it but for those who remain uninitiated here's a brief introduction to the world in which these films sit. Our story revolves around “Others” who are people who have some form of supernatural ability. These come in both Light and Dark Other forms and as such there's a certain degree of tension between the two forces. It hardly needs stating that they have different agendas or who are the goodies or baddies here I feel. However in this world after many years of war a truce is called between the two opposing sides. To make sure the truce is maintained there are the Night Watch and the Day Watch - essentially supernatural police forces from each camp that make sure the other is abiding by the rules of said truce.

The central protagonist of this film (and the first) is Anton - a Light Other who during his exploits in Night Watch found himself to be the father of a Great Other that has turned to the Dark side (sorry Mr Lucas there isn't really another phrase that's applicable). It's after these events that we meet Anton again. He's a little older and a little more burnt out and much to his chagrin he's being framed for the murders of various Dark others. It's worth noting that the film originally bore the tagline “The chalk of fate” which is another seed that slowly germinates throughout the story. If things weren't already fantastical enough with supernatural powers and vampires the sequel has introduced an ancient chalk that is capable of granting any written wish the bearer cares to scribe.

Now whilst this may fall handily into the category of sci fi and fantasy, it's dubbing as a blockbuster is perhaps only applicable in its homeland. It was never destined to be in the same league as, say, a Spiderman but it did break Box Office records in Jan 06 by becoming the highest grossing film in Post Communist Russia (just as it's predecessor had done so before), surpassing $30 million and breaking the previous record of “The 9th Troop”. Only fitting then that during one scene Anton smashes through a billboard that promotes the same said previous title holding film. Such is the success of the franchise in book and film form that it has also moved into another medium - that of videogames. In 2006 the imaginatively titled Night Watch game was released, followed up by a sequel in 2007 called (you guessed it) Day Watch. This medium jumping success though is all in keeping with a franchise that feels at home in the world of comic book stories. In fact it's only surprising that they haven't branched off into that field as of yet.

The film wears these stylings and credentials proudly though and never wavers too far into scenes without some form of paranormal shenanigans. Perhaps the most substantial of all the drama is held in the background for much of the film which is the tension between father and son. Like Lucas' grand daddy of the sci fi genre it's a pivotal construct around which much of the interactions take place - various characters often seemingly finding themselves merely in the slipstream of this complicated relationship and the inevitable strife it's causing and the conclusion it's heading ever closer towards. Though it's worth mentioning that this is far from the standard Star Wars copycat as in this situation it's the father that is desperate for his progeny to repent.

There isn't as much a momentous journey for Anton here as we saw in the first film as a great deal of the driving force seems to me the fallout and consequences from the ending we witnessed in Night Watch. However it's still very much his feature which is where I started to lose sympathy for this film. I can't help but feel that much of the success of Night Watch was down to the superb central performance of Konstantin Khabensky with his brilliant portrayals of pathos, confusion, tiredness and regret. Not wishing to spoil too much of the plot for readers but during sections of the film there is a degree of swapping, this often makes one feel like half the time Anton is supposed to be on screen he is being played by another actor.

True these scenes perhaps couldn't have been amended too much as fans of the novels (many of whom have discovered them since seeing Night Watch) would undoubtedly feel dismayed at any departure but many of the scenes, no matter how brief they are, leave you wanting the camera simply to follow Khabensky again. It's not that the characters on the periphery are bad or that the actors portraying them aren't giving good performances, it's just that I question how much I would have given my patience over to any other fantasy fare had the protagonist in his usual guise been absent for various segments. Though some might point out that this isn't “Anton: The Movie” a la Spiderman, Constantine etc this is Day Watch and thus about the collective ensemble of “Others” therein. However no matter how one dresses it up the film ultimately could lose/replace virtually any other character/actor and remain little changed in my opinion. Ultimately Konstantin Khabensky's depiction of Anton is what raises these films for me above other foreign fantasy outings. He's the centre piece and hub around which the story revolves and thus it seems a shame to spend anything other than the merest moment watching any other actor than Khabensky bringing his mannerisms to life.
The humour throughout has a certain charm to it. As previously mentioned the billboard smashing of a film they would be competing with coupled with the appearance in a minor blink and you'll miss it cameo of the novels author Lukyanenko (as well as several other luminaries of the Russian sci fi writing world) in a scene all add to the self knowing nature of the film. This mixes well with the performances which are generally astute and pleasingly tempered. Some manic characters and their inhabiting actors aren't afraid of a little ham but in general there's a nice combination of comic book action and absurdity coupled with scenes of dialogue that are underplayed and delivered as if tax returns were the order of the day rather than the end of the world.

Ultimately I came to the film as a firm fan of the first and couldn't help feeling somewhat under whelmed by it all. There was a real lack of visceral edge to proceedings. Anyone who saw the scene in the Night Watch where Anton confronts a pair of murderous vampires and is attacked with scissors will remember the bloodshed and palpable fear but here there's a feeling that no matter what happens the central character is going to be fine. We essentially have to wait until the end scenes to see him in his bloody dishevelled state that marked him out as an imperfect antihero originally.

The direction is dynamic very much in keeping with the flashy fantasy style of the film as a whole especially given that the average non Hollywood effects laden film falls down on said CGI etc. Such scenes are handled with panache and always manage to contain suitable sweeps and cuts so as to never linger too long on effects that might appear anything less than realistic if kept within a still viewfinder for too long. Essentially, being a continuation of the first story with the same cast and director there's not much that can be criticised with those departments that weren't flawed in the original; it's merely the pacing that I feel is somewhat less than smooth.

I will state that for all my nit picking I enjoyed the film and look forward to watching a Night Watch/Day watch double bill back to back, it's just that I know which of the films I'll relish watching more. If you liked Night Watch I'd still recommend this but for those who were left cold by that film there's nothing here that'll likely sway you to become a devotee of the franchise as a whole. In short this is as much a marmite film as the first - an acquired taste.