Dawn of the Planet of the Apes Blu-ray Review 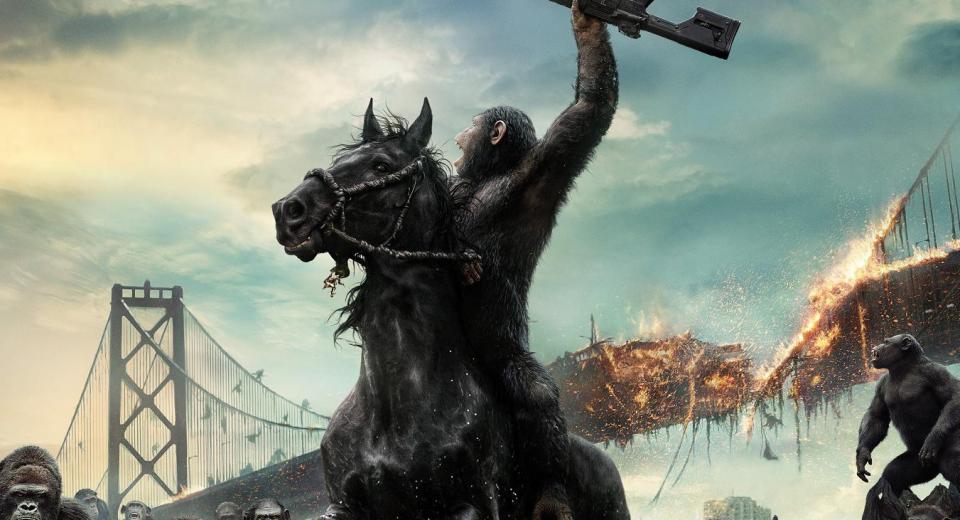 What's it all about?

The sequel to the reboot-prequel which followed the failed reboot of a five-film classic original series, Dawn of the Planet of the Apes strikes out as one of the best in the ongoing Apes saga, and one of the better blockbusters of 2014 too.

Right from the get-go Dawn establishes itself as a meaner, leaner and more committed Apes feature than its predecessor. Whilst Rise was engaging, it suffered from the same handicap that many reboots suffer from – it had to take time to establish the characters and detail their origins, whereas later chapters can just run with them. Dawn does just that, quite literally at the outset, allowing us a closer look at these new super-intelligent creatures and seeing, through their actions, that they are increasingly like us.

Indeed perhaps that is the very essence of this sequel, as its core themes involve a full-circle return to the inspiration for the first movie – where Rise tried to show us apes who were closer to humans than ever before, Dawn shows the downside to their rapid evolution, and sees them displaying some very human flaws; succumbing to the same mistakes that have plagued mankind across the thousands of years of our history – through fear and anger, jealousy and bitterness – and eminently proving themselves no different from us after all.
Indeed, barring the human factor, this instalment would likely be the very best of all of the movies, and raise the bar pretty damn high. Unfortunately, though, Studios aren’t quite (and probably never will be) ready to commit to a film utterly devoid of either human characters or the characteristics of a human-driven movie (i.e. the requisite effects-driven scenes of blowing stuff up unnecessarily), both of which would have made for a far better Apes entry.

Still, thankfully the human element can almost be ignored in favour of the excellent depiction of the Ape characters, who take very little time indeed to become differentiated from one another, as fathers and sons, leaders and followers, heroes and villains – all fully-rounded, and far, far more so than any of their human counterparts. They’ll have you pitying them, frightened of them, both angry for and with them, and outright rooting for them. And eagerly anticipating the day after the Dawn. Dawn of the Planet of the Apes comes to UK Region Free Blu-ray complete with a largely impressive 1080p/AVC-encoded High Definition video presentation framed in the movie’s original theatrical aspect ratio of 1.85:1 widescreen.


Promoting some of the most realistic animal CG, and certainly the most epic set-pieces in the Apes series, there’s certainly plenty to appreciate here.

Detail is supreme throughout, not only showcased on the humans in their clothing and skin, but more impressively showcased by the apes themselves, whose every hair, every scar, and every little movement comes to life with blistering authenticity and superior attention to detail. Background flourishes are also noteworthy, with the forest-based camp also looking fantastic, and the constant gloom and rain only enhancing the atmosphere.

The colour scheme is suitably moody as a result, but again this perhaps only helps the apes come to life, and the natural elements in the environment – in particular the trees – are vivid and vibrant within the rainy gloom. A fiery attack brings life to the images, as does the final assault, and there are plenty of colourful flourishes on the way, but this is certainly a gritty affair, and all the better for it.

Although not coming with any significant image issues – the darker sequences struggle with some of the brighter explosions, and there’s a smattering of crush and banding, but nothing whatsoever to get upset about, and certainly nothing to spoil your viewing pleasure – it’s hard to regard this as unquestionably reference material, even if it does tick all the boxes as a demo disc.
It is worth noting that Dawn of the Planet of the Apes was shot natively in 3D and thus features plenty of sequences which feel distinctly 3D-driven (although still impressive in 2D), not least the FPS scene, as well as lots of opportunities for having flying debris bursting through your screen. The accompanying DTS-HD Master Audio 7.1 track is another strong offering in a year of outstanding blockbusters and equally noteworthy corresponding home video presentations.

Dialogue reigns supreme, and remains clear and coherent throughout – even when growled by the apes themselves – but this track relies more heavily on strong atmospheric work, outstanding action effects and a suitably engaging score. Effects are handled superbly, with impressive surround action, and dynamics which see discrete elements find their way across your living room. Obviously the most aurally noteworthy sequence is probably the assault, but the ambience during the quieter moments is arguably just as important, keeping the all-engulfing, immersive feel going throughout the proceedings. With solid LFE support and that aforementioned score playing a key part too, this is a strong demo track which earns this release yet more high marks.

On the extras front there’s a hearty selection which comprehensively covers all of the bases – an engaging and informative Audio Commentary with Director Matt Reeves, who explores what he’s had in mind for the apes saga, and the importance of reflecting human weaknesses in the apes after Rise showcased the strive to prove themselves superior. There are a selection of Featurettes, including Journey to Dawn; Humans and Apes: The Cast of Dawn; The World of Dawn; The Ape Community; Move Like an Ape: An Artist’s Medium; Weta and Dawn; Andy Serkis: Rediscovering Caesar; and The Fight for a New Dawn. They cover everything from pre-production, concepts and ideas to casting, shooting and locations, but – rightfully – also focus heavily on the apes and the corresponding CG effects-work. There’s also a selection of Deleted Scenes with Optional Commentary by Reeves, as well as 4 Galleries. Phew, is that enough?! If not there’s an Exodus: Gods and Kings Sneak Peak too!.

Dawn of the Planet of the Apes Blu-ray Review I thought Dawn was an excellent Apes entry, and only hope that somebody comes to their sense – and has the guts – to finally deliver us a human-less chapter in this saga, where we can finally get embroiled head-to-toe in this animal farm. Or at least brings things full-circle, back to the old Heston universe, with a return to that Mars mission that was briefly mentioned in Rise. Even without either coming true, however, I can't wait for the next instalment.


In a good year for blockbusters - X-Men, Edge, Winter, Guardians, Interstellar - this is up there with the best.

Dawn hits UK shores complete with a strong Region Free Blu-ray release which boasts excellent video and audio and a hefty selection of extra features which are sure to keep most fans satisfied. There's a 3D counterpart too, and for those with a 3D set up it's worth considering that since the film was shot in native 3D and has some nice 3D touches. If you're a fan of the Apes saga, a fan of the last prequel/reboot, or a fan of great movies in general, then this is certainly a must-watch blind buy release. Recommended.