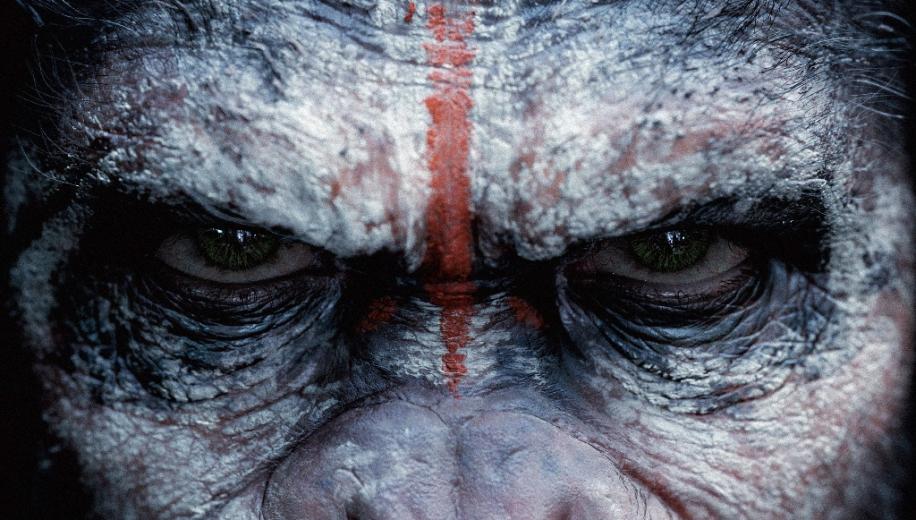 I always think... ape better than human. I see now... how much like them we are.

Taking place ten years after the events in Rise of the Planet of the Apes, the sequel Dawn of the Planet of the Apes, takes what was great about the former and turns it up to eleven! The human population of the world has been decimated by the ‘Simian Flu’ (the intelligence vaccine from the previous film), those that were not killed outright suffered at the hands of civilisation’s breakdown. In the aftermath, small pockets of resistant humans have formed communities where they try to live out as best they can; one such settlement, in San Francisco, is trying to restore a dam and thus return power to parts of the city. In the process they come across an unlikely sight, deep in the forest Caesar and his extended family of apes have their own civilisation and when paths cross, mistrust on both sides sparks further unrest and begins the war between the apes and mankind.
This brief synopsis does nothing to engrain the depth of character given to the narrative, and it is that very nature that makes Dawn so engrossing. Both tribes have been living their separate lives, wary of the other, but each assuming the other has passed. The chance encounter brings back all the old prejudices, on both sides, and the fundamental struggles that drive all primates comes out – the will to survive. It is the personality of the leaders that decide the fates; peace or war; both have a chance, yet that dark path of mistrust dooms everyone. Director Matt Reeves, along with his writers put together a perfectly paced action film, with strong believable characters whose decision making is credible and whose outcome is inevitable. There is empathy, realisation, stunning effects and a convincing world, making the film a stomping success. Dawn of the Planet of the Apes was filmed digitally (and in 3D) using Arri Alexa M cameras, with a resolution of 2.8K, and was finished using a 2K Digital Intermediate (DI), which presumably formed the basis for this Ultra HD Blu-ray release. This source was up-scaled to 3840 x 2160p and is presented in its correct widescreen 1.85:1 aspect ratio. The disc uses 10-bit video depth, a Wider Colour Gamut (WCG) and High Dynamic Range (HDR), and is encoded using the HEVC (H.265) codec. We reviewed the Region free UK Ultra HD Blu-ray release of Dawn of the Planet of the Apes on a Panasonic 65DX902B Ultra HD 4K TV with a Samsung UBD-K8500 Ultra HD Blu-ray player.


This time there really aren't night and day improvements


The Full HD Blu-ray was always a demo quality disc, so the UHD disc will have to go some to beat it, and whilst there are modest improvements, this is the first time when bouncing between the two images that it was, at times, difficult to tell them apart! Detail is excellent, skin texture, both human and ape is sublime, the fur, whether wet or dry, of the apes looks real enough to run your fingers through. The forest foliage is pin sharp, mud is palpable, the cityscape shots of crumbling San Francisco, with all the decay and plant growth is picture postcard perfect. There are only the slightest improvements over the Full HD image in this regard. When this is the case (and it happens quite often with 2K DI’s) you can normally count on HDR and WCG to push the boundaries, but in this case these improvements are not the ‘night and day’ enhancements you might expect.

The greens of the forest are slightly lusher, the oranges of the flames do contain more depth of colour (as do the burning embers), Malcolm’s blue jacket is slightly deeper – moving on, there is more to see in the shadows, the top end contains a tad more detail; but you really have to squint to see it. Day time shots show the most improvement but this is due to the inherent brightness of the image. Take a look at the chapter-stop in the aftermath of the burning ape homestead – the oranges of the smoke, and the sharpness of the flames, the crispness of the rock faces and treelines are just improvements over the Full HD image. Now look at Maurice’s fur, the Full HD has a distinct orangutan ginger compared to the UHD disc’s darker hue. The blacks of the Full HD image at first glance are more robust in their depth, however the UHD has far more in the shadows, even if it, at times, they appear grey; though it must be said that whilst the Full HD image does pick up on some of the digital grading (i.e. green, brown or blue blacks), this is far cleaner on the UHD.

So, on balance I’d have to say that the UHD has the better picture, but it is a very, very close call; whether that means the 1080 disc is beyond demo material and, as such, the UHD can only just compete, or that this UHD just isn’t as well authored as it ought … well, that’s up to you to decide. Despite having a Dolby Atmos soundtrack at the cinema, Fox haven't bothered to upgrade the soundtrack on the UHD Blu-ray release which is not only a missed opportunity but also inexcusable. What we get instead is the very same reference DTS-HD MA 7.1 track that accompanies the included Blu-ray. Dawn has long been used here at AVForums as a go-to demo track; the opening scene is a masterclass in sound engineering that starts off small and builds to something utterly spectacular. But the whole track is littered with wonderful examples of surround emersion; the woods, rain, echoes underground, battle sequences – the surround speakers not only provide ambience but are pinpoint accurate with their effects. Bass is deep, tight and strong underpinning everything from the ape growls to explosions, from horse gallops to water in the dam. The score is well layered into the mix, as is the dialogue which is clear, precise and always audible despite the mayhem on screen. As a 7.1 mix it's reference all the way but there should have been an immersive audio track instead. Disc 1 – UHD
Audio Commentary – Director Matt Reeves give us an enthusiastic track about his experiences filming in native 3D, motion capture, finalising the compositions and plenty more in what is both an anecdotal and technical chat.

Disc 2 – Blu-ray
Audio Commentary – As above.
Deleted Scenes – 3 in total and can be played with or without an optional commentary by Matt Reeves.
Journey to Dawn – This 9 minute feature has cast and crew talk about building this new franchise with reference to what has come before.
Andy Serkis: Rediscovering Caesar – Another 9 minute feature this time focusing on Serkis (though Keri Russell and Toby Kebbell make appearances) and motion capture technology.
Humans and Apes: The Cast of Dawn – Slightly more substantial feature at 18 minutes is more or less a basic making of looking at production of the feature with the usual interviews and movie clips.
The World of Dawn – 15 minutes taking a closer look at production design, location shooting, sets and GC.
The Ape Community – 10 minutes examining apes, their culture, society and interactions in relation to our own.
Move Like an Ape: An Artist's Medium – Another 15 minute piece taking a closer look at motion capture, the performances of the actors, their training and the photorealistic CG.
Weta and Dawn – A 20 minute warts and all look at the New Zealand visual effects house and how they created the latest techniques for the CG characters in the film.
The Fight for a New Dawn – 16 minutes looking at stunts, choreography, rehearsals empty stages and pre-vis.
Gallery – 4 in total: Concept Art, Characters, Costumes, and Props
Theatrical Trailers Dawn of the Planet of the Apes is the spectacular sequel to 2011's Rise of the Planet of the Apes, and continues the story after 10 years have elapsed. Caesar and his family of apes are living unmolested in the great forest beyond San Francisco meanwhile the human race has been ravaged by the Simian Flu. A chance encounter between the two species sparks renewed prejudices, and while a path for peace is available, deep seated resentment seems the path to war inevitable. Terrific characters and an action packed screenplay, takes everything that was great about the first film and turns it up to eleven – awesome entertainment.


This Ultra HD Blu-ray release is a decidedly ambiguous upgrade


The 4K Ultra HD Blu-ray set from Fox is difficult to recommend; the picture (coming from a 2K DI) is not the significant upgrade over the (included) Full HD Blu-ray you might expect, even when you take into account detail, HDR and WCG; there is sharper detail, colours are more defined and blacks are resolved better; but the differences are very subtle and nothing like that night and day revelation you want to see in a new format. Add to that there is no upgrade in sound to Dolby Atmos or DTS: X – it retains the same, albeit stonkingly demo material, DTS-HD MA 7.1 track – and that the extras although good, have nothing new added to what has already been available for years, means that the choice to upgrade becomes ambiguous. Factor in its obvious release date to coincide with War for the Planet of the Apes and your choice might be clearer.