When you need power, let Datasat's RA7300 do the heavy lifting 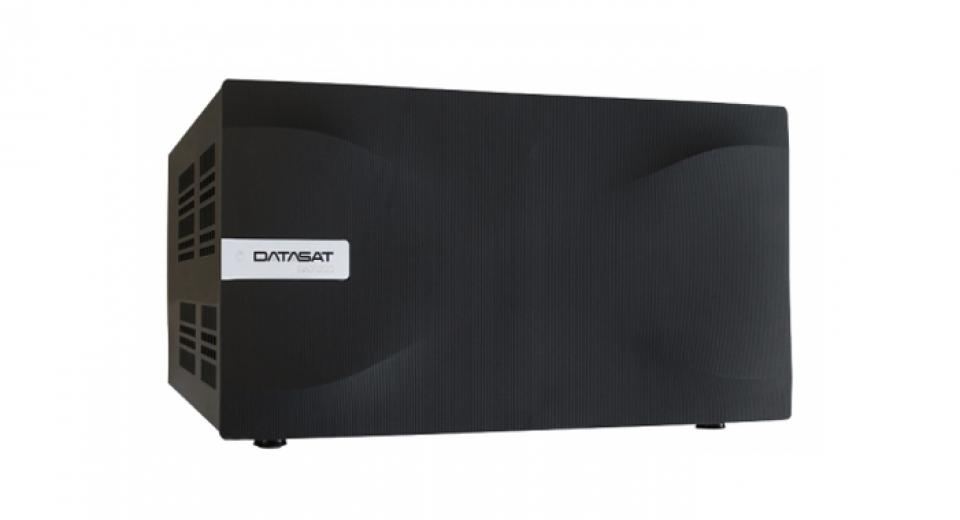 We recently reviewed Datasat's remarkable RS20i and, having redefined what a surround processor can do in the home, the company clearly felt they needed a dedicated multi-channel amplifier to go with their flagship product. The result of their labours is the RA7300 7-channel power amplifier that has been designed from the base plate up to perfectly compliment the RS20i. Datasat has used advanced circuitry and careful design to deliver what they claim is one of the quietest and most powerful amplifiers on the market. The RA7300 can produce a whopping 300 watts per a channel into 8 ohms and apparently that's a realistic number, rather than the point just before the amplifier blew up! The fully balanced differential design supposedly doubles the amplifier speed whilst reducing noise by 50% and this, Datasat feel, will result is consistently low distortion and extremely quiet operation. Well that all sounds very promising, so let's connect the RA7300 to the RS20i and find out just how good it actually is.

The design of RA7300 is an exercise in power, simplicity and elegance. It's minimalist front panel has been designed to match the styling of Datasat's RS20i audio processor, with a logo panel that doubles as an on/off button. However, the two devices share more than just cosmetics and the build quality is equally as impressive. The RA7300 isn't just built like a tank, at 75kgs it nearly weighs as much as one and it will take at least two people to move and it's very front heavy. The chassis measures 22cm x 43cm (48cm with rack ears) x 53cm, so you'll need to ensure that wherever you install it can take both the weight and the size. The reason for this size and mass is what's inside, because Datasat have set out to design a power amplifier worthy of their RS20i audio processor. The RA7300 uses dual thermal sensors, one for each channel bank, that control very low speed fans and very substantial heat sinks - hence all the weight. The fans only operate when program material requires additional cooling to ensure any fan noise is always masked by programme content. As a result, the RA7300 can deliver a signal-to-noise ratio of 127dB - A weighted and referenced to full output.

In the RA7300, each amplifier channel is designed with a power supply on a single printed circuit board and there are separate power supplies for each channel bank to minimise crosstalk, noise and distortion. This approach also provides for ease of replacement and any system maintenance required in the future. As a result, the RA7300 can deliver seven channels of 300 watts RMS power at 8 ohms and 450 watts RMS at 4 ohms. Unusually, these numbers appear to be based on reality, with all channels being driven from 20Hz to 200kHz with no more than 0.05% THD at 8 ohms or 4 ohms. The RA7300 uses dual-DC servos to ensure that DC offset is as a minimum and thermal-track transistors maintain the power amplifier at its optimum bias point, independent of the amplifier temperature. The RA7300's fully balanced differential topology doubles its slew rate and reduces noise by half, whilst the use of current feedback increases amplifier speed. The amplifier also has a frequency response of +/- 0.1dB from 20Hz to 20kHz with 1 watt output and a power bandwidth from 5Hz to 100kHz. Despite all this power, the RA7300 meets or exceeds all international standards for standby power consumption including the new 1/2 watt standard.

At the rear there are two three pin connectors for the AC power cords and power buttons for the separate power supplies of each channel bank. Down the right hand side of the back panel are the 5-way binding posts for the speaker outputs of the seven channels. There are also balanced XLR inputs, a balanced DB25 input and a DB25 output for pass-through. Finally there's a 12 volt trigger for remote turn on. Since we were partnering the RA7300 with Datasat's own RS20i, we used the DB25 connector which made setup quite straightforward, although you do need to select each of the seven channel using dedicated DIP (dual in-line package) switches. The reason for this is that the seven speaker terminals on the RA7300 can be assigned to any channel with the DB25 connector, whereas with the XLR inputs you turn the DIP switches off and just connect each channel individually to your pre-amp/processor. In addition to the RS20i audio processor, the RA7300 was tested with B&W speakers and SVS subwoofer in a standard 7.1 layout, using Dirac Live room optimisation.

The first thing worth mentioning is that Datasat’s power numbers are clearly genuine, with the RA7300 comfortably being able to drive all seven speakers at reference levels - not that our ears could stand that for long. The power amplifier could easily fill a decent sized space so it was more than capable of shaking our home cinema to its rafters. In fact, over the course of testing the RA7300 and RS20i, we discovered a number of rattles in the room that needed our attention. Thanks to all this sonic ammunition the audio performance was totally engrossing, with the RS20i making full use of the power that the RA7300 had on offer. The result was a truly remarkable combination of detail, control and dynamic range, which made the overall sound totally immersive. Musical scores had a wonderfully expansive front soundstage, whilst dialogue remained perfectly clear and effects precisely localised, with seamless pans around the soundfield. Thanks to the incredibly flexible bass management on the RS20i, the low frequency performance of the RA7300 was exceptional, delivering tight and effective bass to all the speakers.

We used a number of our favourite Blu-rays for testing, kicking off with Jurassic Park and the T-Rex attack has never sounded so good. From the rain hitting the car windows to the initial bass thuds that accompany the ripples in the glass of water to the full-on roar of the T-Rex itself, the combination of the RS20i and RA7300 was a masterclass in control and precision. All the sounds, from the music to the dialogue to the effects were perfectly rendered and the entire scene benefited from the soundfield filling the room. The RA7300 had power in abundance but it also had a certain amount of grace and the RS20i was able to take full advantage of the remarkable dynamic range and detail on offer. The sound quality was quite simply superb with no distortion, even at high volumes and the noise floor was incredibly low. Soundtracks could go from a whisper to a scream with remarkable impact and the bass was tight and deep, delivering an impressively subterranean low end when necessary. This effective use of dynamic range was perfectly demonstrated in the soundtrack to Oblivion, with the RA7300 moving from the tiniest flicker of a candle to the utter sonic assault of a nuclear explosion, without breaking a sweat.

OK let's get this out of the way first, the RA7300 is big and heavy - really heavy. We don't mean normal amplifier heavy, we mean heart of a neutron star heavy, so you need to bear this in mind. At 75kgs in weight the RA7300 will take at least two people to lift it and with measurements of 22cm x 43cm (48cm with rack ears) x 53cm, you'll need to ensure that wherever you install it can take both the weight and the size. That rather hefty point aside, the RA7300 is an exercise in elegant simplicity, with a plain thick metal facia that is designed to match the styling of the RS20i. The only other feature on the front is a small logo panel that doubles as the on/off button. At the rear we have two AC power cords and power buttons. along with 5 way binding posts for the seven speaker channels. There are also balanced XLR inputs, along with a balanced DB25 input and a DB25 output for pass-through.

Since we were partnering the RA7300 with the RS20i, we used the DB25 connector which made setup quite straightforward, although you do need to select each channel using DIP switches. The reason for this is that the seven speaker terminals on the RA7300 can be assigned to any channel with the DB25 connector, whereas with the XLR inputs you turn the DIP switches off and just connect each channel individually to your pre-amp/processor. That's it as far as setup goes and then it was on to the listening tests and it's fair to say, we were in for a treat. The RA7300 has power in abundance but it's also controlled and precise meaning that the RS20i was able to take full advantage of the remarkable dynamic range on offer. The sound quality was quite simply superb with no distortion, even at high volumes and the noise floor was incredibly low. Soundtracks could go from a whisper to a scream with remarkable impact and the bass was tight and deep, delivering an impressively subterranean low end when necessary.

The RA7300 could drive all seven channels with ease, whilst still retaining plenty of headroom, so there's no question that the power numbers quoted by Datasat are realistic - which makes a nice change. The RA7300 would elevate any system it was added to but when used in conjunction with Datasat's RS20i audio processor the results are just spectacular. This marvellous processor/amplifier combination delivered power, accuracy and refinement in equal measures, resulting in a superb audio performance that sets a new standard for home cinema sound. The Datasat RA7300 might well weigh a ton but when it comes to a serious home cinema setup, this powerful amplifier can do all the heavy lifting without breaking a sweat and it can do it with a surprising amount of grace.