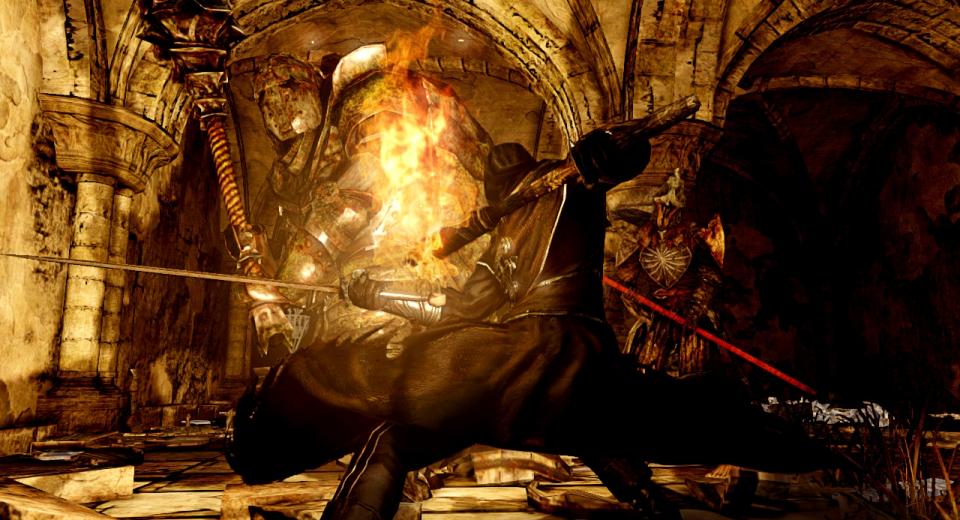 Everything appears the same, and yet nothing is quite what is used to be.

Despite being able to decipher and approach Dark Souls 2’s myriad gameplay systems with a little more clarity and ease this time around, From Software’s talented designers have once again constructed a game that loves to pull the rug from beneath your feet when you least expect.

Seasoned players are treated to gameplay systems that feel familiar and yet tweaked to derail assumptions built up over hundreds of hours’ painstaking exploration, whilst new players are still thrown in at the deep end and asked to paddle their way to safety against the (albeit gentler) tide.

And paddle they will, because From at least sticks around on the sidelines this time, yelling encouragement by way of a series of tiny lessons doled out in a moonlit forest over the opening 30 minutes.

Making it through the branches and suspended walkways brings players to a sunny cliffside with a hazy orange glow; a melody plays in the background, while a little further down the path lies the township of Majula; home to the second of many checkpoint bonfires, a mysterious pit, and various pathways leading to inevitable death and adventure (also, cute little suicidal pigs).

An oasis of hope Majula is Dark Souls 2’s Firelink Shrine, and all but the most painful of roads eventually connect back to its sunny shores. Many of the wandering band of miscreant NPC characters are able to settle or make an appearance there, while the blacksmith and eventually numerous shops provide options for re-stocking items and bolstering equipment. Given you can now only level up and perform various other strengthening actions within the confines of the specific Majula bonfire, it’s by far the location you’ll see the most.

As with its forebear, this is a place to regroup, change your tack and steel your nerves for one last try at whatever demon blocks the path to another round of death and harsh, harsh lessons.

Sound overly familiar? It is. Although change comes quickly once you venture into the wild.


Majula is a place to regroup, change your tack and steel your nerves

Although Majula’s hub of passages and starting points represents your “home” location, much of Dark Souls 2’s world design has been stretched and teased to incorporate longer, more linear sections of progression, with each distinct area feeling a lot more like its own set piece than the weave of corridors, forests, gates, mines and castles in the original. You can now fast travel to any activated bonfire regardless of its distance and location within the world, and when combined with enemies that disappear after being killed for the 15th time, much of Dark Souls 2’s map can now be explored at a hugely accelerated pace.

That worried me at first. A simple journey between bonfires was fraught with danger in the original, and much of the tension derived from simply getting from point A to point B. Fast-travel and disappearing foes should therefore represent a huge problem; but in practice, they don’t. Dark Souls 2 simply lets you get back to your own personal challenge faster than ever before. The structure of the game has morphed to accommodate that ability in some brilliant ways.

Much of Dark Souls 2 is simply more dense; the amount of boss battles, secret locations and equipment perks has risen dramatically, while more varied enemy design calls for an adjustment of tactics and loadout to best their challenge. As such, getting through the game with a single character build and weapon preference is that much more difficult, while triggerable environmental gimmicks, minions and puzzle bosses also make for tricky changes of pace. There are a few questions to be raised about quantity over quality at various points in your quest, but From’s designers usually have a surprising answer in store. If you’re still convinced those changes will make for a more mollycoddling game, then maybe consider that your health meter now also loses a chunk with every death, slowly winding itself down to a 50% cap. You also start with a single Estus Flask this time around; additional slots have to be found in hard-to-reach locations. Even the basics can’t be counted on.

Those specific changes are just a few of the many that put players at a disadvantage, but each has several viable solutions that come at a cost (consuming human effigies, wearing a ring at the expense of another, etc.). It’s the interconnectivity of those decisions and gameplay systems with which Dark Souls 2 also improves on the first game. More so than before, this is an RPG in which you truly have to play a role or suffer the consequences. There are so many perks, systems, events and NPCs to uncover that no build will ever be “right” for the duration of a playthrough or single session, but with careful planning you can tailor most encounters to your favour - provided you have the right equipment and items. More so than ever, your general level of meat-headedness contributes heavily to the experience you’ll get out of the various combat scenarios, as my own horribly inefficient three-hour mission to solo run the pirate cove of No Man’s Wharf will attest (I lost 15,000 souls to a booby-trapped chest on my first go, I had a stupid weapon, I was very, very angry).

The moment-to-moment parrying, blocking, swiping and casting of Dark Souls 2 has also been tweaked for the better. Several new moves now enable players to roll out of jumps or climb ladders quicker, while many of the weapons come with altered or entirely new animation sets, making your choice of greatswords, axes, katanas, daggers, bows, staves and fists that much more personal. After all, the stats might be brilliant on that gigantic club, but it's no good if you can't get into its rhythm.

Or, it's no good if it's a kitchen ladle. Remember that tip.

Although many of the locations in Dark Souls 2 also contain a similar quantity of insta-death pits, mechanisms and powerful swarms of enemies waiting around dark corners, it never really feels cheap. Many of the enemies can be run past entirely on your way to a boss battle or the next zone, and there are fewer technical problems that pop up to spoil the party. The Xbox 360 version of the game runs smoothly for the most part, which will be a welcome surprise for those that played the original on Microsoft’s console. Perhaps the most surprising element of Dark Souls 2 is how its revitalised suite of online systems change the flow of the game entirely.

I'm a huge fan of the way From Software has implemented their multiplayer in previous Souls games. The ghostly apparitions and death replays gave you a little glimpse into the world of other players, building a sense of community and a realisation you weren't going it alone; thousands of others were getting stuck in the same places, and their handy scrawlings on the floor served as a quick hint system or as a means of devious misdirection. It brought a sense of playful community to long, painful treks between bonfires, the phantoms adding a literal light to the oppressive darkness.

Dark Souls 2 takes the core concepts behind soapstone scrawlings, invasions, covenants and sin levels, and - as with the other core mechanics - makes them more accessible and prevalent than ever before. Invaders can now jump into your world no matter your state of humanity, and numerous co-op players lay down their mark around each bonfire or boss fight, allowing up to two other humans to be summoned into a world for short periods of time. The time limit is just long enough to conquer an annoying boss, or show the way to hidden items, shortcuts or other secrets.

On successfully completing your co-op tour of duty you’ll get one of three types of token, which can be used to trade for elusive gear or influence other PvP and PvE systems. You’ll also receive all the souls from whatever enemies you’ve just run through as a group, making co-op a very appealing alternative to the offline farming runs that characterised the original. Indeed that seems to be where the current long-term appeal of Dark Souls 2 lies, with groups of like-minded players helping newcomers through tricky areas or ganking unexpecting travellers as they approach one of the PvP covenant zones.

It’s brilliant fun. One particularly gracious host refused to move until I found the secret area he was pointing to in No Man’s Wharf (totally worth the Xbox Live messages in mangled Dutch), and a big shout out to the chap that accidentally killed his host with a ballista shot when he was within one final strike of killing his first boss. Painful.

A few words of warning however: voice chat is enabled for others coming into your world, but it can be switched off for those of us that don’t like to be completely pulled out of the experience (repeatedly asking for Titanite shards is really not cool), and there is huge potential to make Dark Souls 2 tremendously easy by only playing with others. Boss battles do scale upwards (a little) when trying with other humans (and you can only ever be matched with players within a 10-level range of your own), but I found it much better to run through an area first, then step in and help others afterwards.

There were times when all I wanted was to blast through enemies that previously plagued me for hours however, and those moments were absolutely made for co-op. Catharsis defined.

Although all the changes that were made to Dark Souls 2 could have resulted in an experience that moved too far away from the challenge of the original, it’s a pleasure to find out the opposite is mostly true.

This is still an RPG with unrivalled melee combat that offers up its tight groups of enemies with a sadistic smile, but it’s also a much more accessible game, with a faster pace to exploration. Sure, moments of head-banging frustration still reign supreme the further you head into the land of Drangleic, but levelling up to meet their requirements is now aided by the ease with which you can change your approach, and the frequency with which others can step in and lend a hand.

If you shun such help entirely, you’ll be met with one of the fiercest bestiaries you’ll encounter in this or any other year. The choice is yours to play the way you see fit, and whether that’s on PS3, Xbox 360 or PC later in April, Dark Souls 2 isn’t an experience you’re likely to forget in a hurry. I’m just glad that sentiment is entirely positive.