It's a supernatural home-invasion scenario 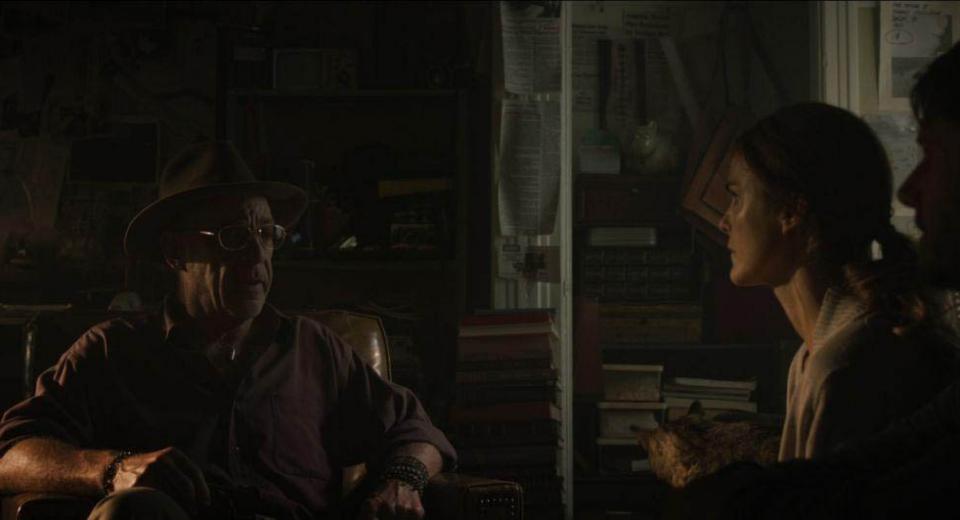 Scott Stewart's Genre movie, Dark Skies, sadly fails to find it's own voice in a cascade of Viewmaster slides borrowed from other movies. It's not that there's anything wrong with the movie, per se, but in an extremely over-saturated genre, it does very little to raise it's head above the rest. Paranormal Activity steals the limelight in many ways, particularly in that, if you took away the scenes that aren't inside the house, you're left with pretty much the same movie, just with far fewer scary bits. It's a supernatural home-invasion scenario that, rather than gripping you with moment to moment tension and suspense, has you constantly distracted as to where you recognise ideas from.

It's narrative follows the Barrett family – Lacy (Keri Russel) and Dan (Josh Hamilton), a young mother and father, struggle to make ends meet and keep the suburban american dream alive for their two young sons. When night falls on the Barrett household, strange things begin to occur. Alarm systems are being triggered, but from inside the house, doors and cupboards are being opened randomly, and furniture is being piled up as high as the ceiling. The parents are frustratingly resistant to giving up the search for a logical explanation, and it's around here that Scott Stewart makes his first mistake by relying heavily on age old trope after trope. As our hopes for an interesting and original take on the supernatural horror fade, the Barrett family's mystery heightens to a watchable, yet predictable climax.

It felt lazy to me. It's as if Scott Thomas set out to deliberately avoid originality. I don't see how, when faced with the narrative problem of how to introduce a supernatural element to the movie, you don't explore new ideas rather than defaulting to the tried and tested. And when you do decide to keep things simple and totally recognisable, how do you not give the audience more of the scary stuff. Stewart doesn't recognise that because he's bringing his audience down a road we all find very familiar that he needs to do something else – show us more aliens. There's no point in hiding the good stuff from us when we already know what it is. It's just trying a little too hard to be safe. Scott Stewart draws far too much obvious influence from M. Night Shyamalan, Stanley Kubrick and Steven Spielberg, when every opportunity was there for him to do something original. And failing that, he spends far too much time building suspense and covering his hand despite the fact we all knew he was carrying a pair of kings, not deuce Aces.

Lack of ingenuity aside, what we're left with is a watchable, occasionally tense supernatural thriller with a fairly solid cast (perhaps save for the youngest son who, in my view, is not a natural performer), that includes a minor role for J.K. Simmons as the creepy loner guy who knows everything about what's happening to the family when they come to him for advice. What it lacks in originality, I'm afraid it doesn't quite make up for in moment to moment frights either. I was hoping that, since I wasn't getting a new story by any stretch of the imagination, I was surely due some big scares. It falls short on this front with barely a handful of spine tingling moments, but what's there is palatable.

I can't quite bring myself to criticise the movie too harshly, and I feel an obligation to strap a fairly average score to it because it's too familiar and too unoriginal, but for all it's failings, it's not a terrible movie. It does things in predictable ways, it never tries to be daring, and it often feels boxed in by the director's rather obvious nod after nod to other movies, but you can make it to the end without feeling cheated or annoyed. If you're going to enter into an already saturated genre, you have to expect to be held alongside the rest of the established franchises, and if you don't do anything different, you should be prepared to take your licks. Scott Steward's Dark Skies could have been worse.