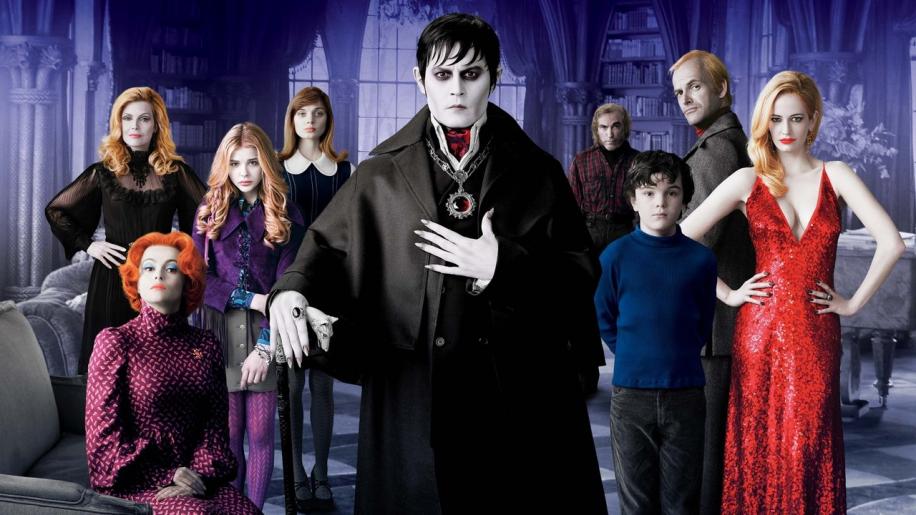 “It is said that blood is thicker than water. It is what joins us, binds us... curses us. My name is Barnabas Collins, and this is my tale.”

The original TV series was aimed at young teens and was not quite as dark as the movie. In fact the TV series did not introduce supernatural characters until well into its initial run and was much more of a psychological slow burner. The shows were repeated during the 90’s and up to 2003, but never made a great impact, having dated very badly in terms of both the style and storylines. A new version was produced in 1991, but despite good initial ratings was dropped after just one season.

Tim Burton has taken a few of the key characters from the defunct TV series and woven a whole new storyline and to a certain extent, world around it. He was in a tricky situation though, as the audience from the original TV show are now in their fifties while the big market for gothic horror is from amongst the late teen to early twenties Emo crowd. His approach has therefore to make a film that will appeal to the new generation, but set it back in the 70’s so the oldies can indulge in a little light reminiscing. Narrated by Barnaby for the most part, we do see occasional scenes from the perspective of the other players.

We start off in Liverpool in the 1700s, as Barnaby (Depp) is boarding a ship to sail for the New World in the arms of his parents, the Collins' as they set out to seek their fortune. They build a town, establish a large fishing and processing concern and, their fortune is assured. Barnaby’s father builds a great gothic mansion to demonstrate his wealth and this leads to jealousy and competing suitors for young, handsome heir. He spurns a servant who unbeknown to him is a witch and she curses him to live out eternity as an immortal vampire as well as causing the death of any rival to whom he professes his love. Realising she will never have him, she has him buried alive, chained into a coffin. Eva Green – better known as a Bond girl is superb as the immortal witch. She mixes in the evil with the sensual and flits effortlessly between the different time frames. You grow to hate her surprisingly fast.

This first act is played out in true gothic style, with dark skies, pallid skin tones and burning torches a plenty. Set to a vast orchestral score, it is full of power and foreboding. Spin forward to the next scene and we are now in 1972 and in a re-make of the opening of the original TV series, a young woman - Victoria (Bella Heathcote) is travelling on a long distance train to Barnaby’s ancestral home to take up the position of governess to the young, disturbed son of the family. We get to understand that his family (The Collins) have fallen on hard times, with the mansion in disrepair and their business all but dead. Michelle Pfeiffer plays the Collins matriarch, presiding over the extended family and it is she who welcomes this strange young woman into the house and attempts to learn a little more about her. Calling herself Victoria Winters, it is hinted that this is not her real name but she is not ready to reveal much more about herself just yet. Dysfunctional would not be a strong enough term to describe the family. From the drunk servant through to the moody teenage girl with more than teenage hormones to trouble her, to the slimy brother and ending with the resident alcoholic psychiatrist, a stranger bunch you would be hard pressed to find.

The 1970s are just brilliantly portrayed. The gothic sound track gives way to pop songs of the era and the run down mansion is liberally sprinkled with iconic 70’s memorabilia. We now need to dig Mr Depp up and the premise for this introduces some of the first comedy in the movie quickly followed by the first massacre. The level of blood and gore is kept fairly low, bearing in mind the target audience and the humour is quite subtle throughout. The transformation of Depp into the vampire is a superb bit of makeup, with longer fingers, extended ears and an even paler complexion. The mansion set is also amazing in both its style and scale, really adding to the production.

With Barnaby now back at the head of the family, he sets about restoring the name to greatness. From rebuilding the fish plant to organising a “happening”, everything seems to be going quite well. There is more comedy in this segment than any other, but you are unlikely to laugh out loud very often as it is again quite subtle.

Unfortunately vampires like to feed on a few necks, so despite all his good intentions, Barnaby reduces the beatnik population by a few percentage points. This character contradiction is just one of a few that make the film a little confusing. Are we supposed to get behind Barnaby as he battles the evil witch who entrapped him and even today seeks to destroy him and his family or do we need to view him as another side of the evil? Character development also feels incomplete, with quite a few dead ends – or should that be red herrings? Maybe this is as a result of the film’s soap opera roots, as in that genre, the storylines can unravel over many weeks, while here there is just a few short hours to bring everything full circle. It does make the film harder to watch than is absolutely necessary.

One of the comedy highlights of the film has to be the sex scene between Barnaby and Angelique the witch. In fact, it is one of the funniest I have seen for a while. Depp does come over a little “Jack Sparrow” at times, but the looks of surprise he does coupled with the physical antics makes it all very entertaining. Barnaby’s objects of desire however lay elsewhere, with both the alcoholic doctor and young Victoria the governess vying for his attentions, although their intentions are somewhat different. Things now start to turn a little darker, as wicked witch Angelique sets out to destroy the family once and for all. As the owner of the largest fish processing plant in the town, she has quite some standing in the community, none of whom are aware she is in fact Satan’s daughter and she uses her authority to stir up trouble for the Collins'. She also causes a pretty huge explosion downtown and extracts a taped confession from Barnaby over the deaths of the beatniks and also the workmen who inadvertently dug him up. What follows is a full on action scene, with huge effects, including people flying across the set, turning into werewolves and quite literally cracking up!

As we move towards the finale, a few story lines come to a conclusion, but others are left open. This is more likely to lead to a spin off TV series than another film, as Burton does not make a habit of out of producing sequels. As films go, this feels original, funny at times and not scary, so much as horror inspired. Although being male, over forty and not exactly in the target market, I still really enjoyed it. The care lavished on this film is clear to see, from the real sets with just a little CGI around the sides to the long and complex fight scene, through most of which the actors perform their own stunts. The mix of orchestral score and 70s music – including a cameo from Alice Cooper is just fantastic while the script is strong and fits the eras perfectly. Burton is no stranger to directing fantasy horror and this one rates as one of his better efforts.