As substantial as a vampire's reflection 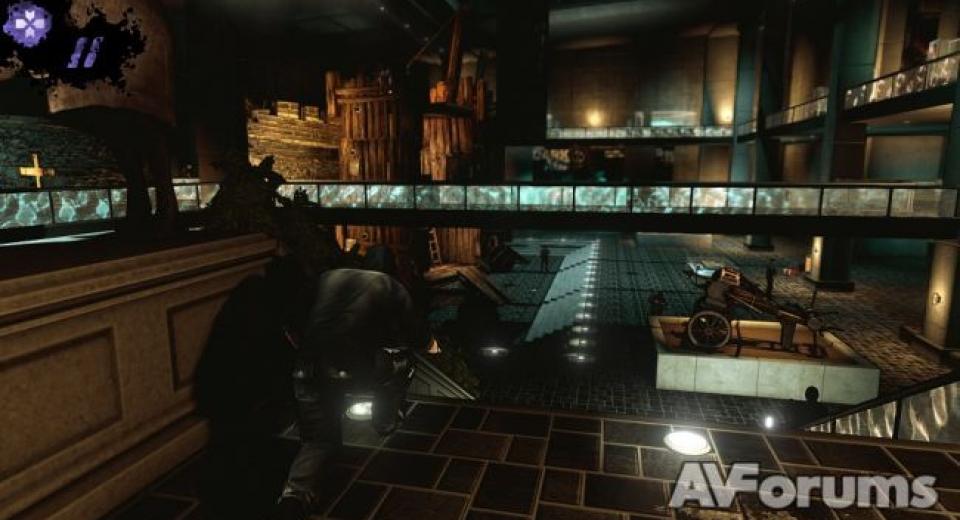 I’ve replayed the opening half an hour or so of Dark four times. The most recent game I did that with was - well, it was The Last of Us just the other week - but before that I think it was possibly Mass Effect 2 back in 2010.

Unfortunately, I didn’t replay the start of Dark for its affecting story or its mindblowing presentation. It was just that first time around I couldn’t quite believe the script and voice-acting was as bad as it was. So I played it again and confirmed that yes, it’s truly awful. Possibly the worst I’ve ever heard. The third time was for science: I had to show my wife to see if she thought it was terrible too. She agreed, and left the room after only a minute or two, claiming to have seen enough.

The fourth restart was because the third had somehow eradicated my save file. I nearly put my control pad through the screen.
The story opens in Dark’s hub, a nightclub called The Sanctuary, where amnesiac protagonist Eric Bane has been partially turned into a vampire. In a cringeworthy exposition dump Rose - the club’s owner, quest-giver and in-mission tech support - explains that Bane needs to drink the blood of the vampire that turned him or he will become a brain-dead ghoul (you could argue he already is one). Dark’s gameplay is all about stealth in the purest sense. Bane is unarmed and vulnerable against his enemies. As any fan of the sneaky-sneaky genre knows, these games live or die on how well they deliver in a few key areas, not least: player-character responsiveness, artificial intelligence and environment. Unfortunately Dark fails at all three.

Eric Bane is possibly the most immobile and clunky stealth protagonist I’ve ever had the misfortune to control. I actually took a break from playing Dark to revisit Tenchu on the PS1 and in my opinion the 15 year old Rikimaru handles better than modern-day Bane.
There are a range of problems. The stick-to-cover mechanic is a mess: it often doesn’t work properly - especially if you’re moving or trying to round corners. Bizarrely, Bane can’t jump or climb in the usual sense, instead he relies on a ‘shadow leap’, which is essentially an awkward, ugly knock-off of Dishonored’s Blink, complete with staccato animations and a woefully imprecise targeting system.

The control issues are exacerbated by the poor AI. Enemies are frequently to be found statue-still and nose to a wall, as if recreating the final moments of The Blair Witch Project. Those who do wander around a bit won’t spot you when you’re inches from their faces; or else they’ll inexplicably notice you while facing the opposite direction. Then there are the environments. Stealth more than most other genres demands patience from the player and it’s crucial that the settings are interesting. Often this will involve a good bit of world-building too, something which Dishonored and Deus Ex: Human Revolution both did marvelously.

This is where Dark should shine. Cel-shading can really add character to a game: it was the single difference between XIII being ‘worth a look’ and ‘a waste of time’, for example. A distinctive visual style can often be a shortcut to creating a memorable world, but Dark's presentation falls flat due to its uninspired locations and unimaginative level design. The character models themselves also leave a lot to be desired: Bane's posture gives the impression he's left the coathanger in his hoodie, his lip-synching is woeful, and he often clips through the enemies he attacks.

Melee combat consists of a single insta-kill punch, which is again hobbled by a weak animation. Sneaking up on someone gives you the opportunity to suck their blood, earning you health and points that are spent each time you use one of Bane’s special powers.
These powers are gained through what you could generously call Dark’s “role-playing elements”. In other words: skill trees. These include passive powers like making less noise or having more health, and slightly more interesting ‘vampiric’ abilities including turning invisible, distracting guards and moving quickly. It’s like a lacklustre and less impactful reimagining of Deus Ex’s upgrade system. And of course, Dark just wouldn't be complete without a version of Batman's Detective Mode, which here is called Vampire Vision and offers nothing new whatsoever. The fact is, the more time I spent with the vacuous Bane and the rest of the coven, the less I cared about Dark. Occasionally it’s possible to come away from a review angry because the game is broken, or frustrated because a game doesn’t deliver on its potential, but in this case the overriding emotion is simply boredom.

Dark doesn’t have enough about it to make you hate it. Even considering the stupid plot, terrible voice acting, glitchy action, dumb AI, mangled vampiric lore, by-the-numbers design, total lack of originality and absence of fun -- even considering all those things, I don’t hate it. I’m philosophical about it: in a year’s time I won’t even remember it exists and that’s just fine by me.

Dark is a pure-form stealth title with very light RPG elements that doesn't warrant your time, money or attention. At its best, the stealth genre has produced some of the finest games ever created, but Dark shows what happens when it all goes wrong. Don't touch it with a 10 foot stake.