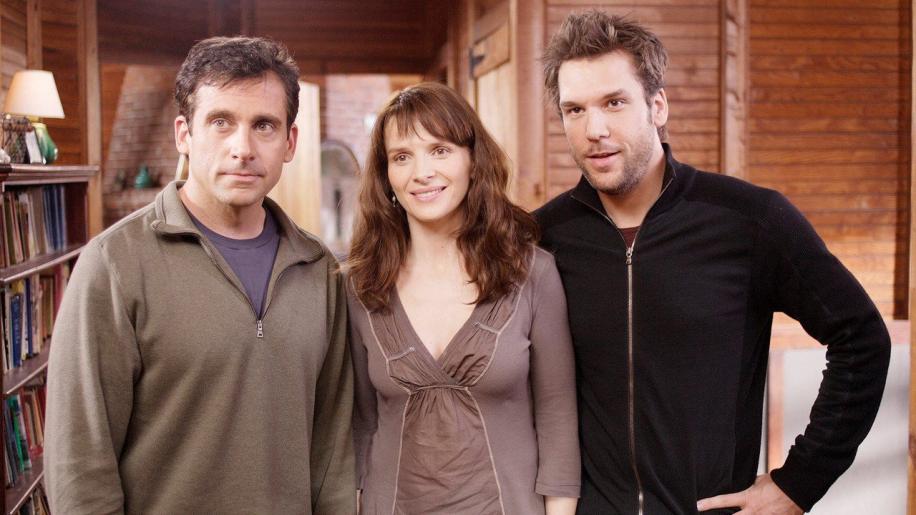 There are some movies you see which, irrespective of their genre labelling, manage to strike a chord with you. What should be trite is strangely familiar, what should be cheesy is actually quite sweet and what could have been just another Hollywood rom-com turns out to be more of a particularly perceptive relationship and character study. Don't get me wrong, I'm not tipping this for an Oscar, but this is certainly a movie that can be related to from the perspective of one of the many realistic characters. And boy did I not expect that when I first watched it.

Dan is a widower, who has his hands full with three daughters, a mature 17 year-old, a precocious 14 year-old and an insightful 8 year-old. He clearly loves them, and wants what is best for them, but his over-protectiveness often leaves them feeling suffocated. And Dan himself appears to have forgotten what it is like to be passionate about something, or someone - despite being a relationship columnist, he never seems to take his own advice. On a family retreat, he bumps into a woman in a bookshop and they instantly find chemistry, spending the day together talking and laughing as if they were made for one another. Unfortunately she is not single, but when they part company she offers her number and hopes he might call. Unbeknownst to the both of them, this lovely lady, this soul-mate, just happens to be Dan's brother's new girlfriend - and is also invited to the family retreat. And when they meet once again, things become pretty complicated, pretty quickly.

I'm not sure how often I have seen this kind of story before, but I've definitely not seen it done like this. What seems like an improbable scenario is handled adeptly, showing us clearly why these two are meant to be together, and showing the damage it can do when they try and deny it - and hide their feelings from their loved ones. There's jealousy, denial, insecurity, betrayal, charm, chemistry, romance, love and laughter all rolled into this package, and every single one of the individual inter-family relationships work superbly - from the father-daughter trilogy, to the way in which he interacts with his brothers and parents, who seem to see him as something of a joke, somebody to be pitied. And of course it all ties into the main story of Dan and the love of his life, the overwhelming chemistry, the pain, and the tragedy all coming together to leave you wondering whether you've ever had any of these moments in your life.

“What don't I understand? Please, help me out. What is it? Is it frustrating that you can't be with this person? That there's something keeping you apart? That there's something about this person that you can connect with? And whenever you're near this person, you don't know what to say, and you say everything that's on your mind and in your heart, and you know that if you could just be together, that this person would help you become the best possible version of yourself?”

If there's anyone I can relate to it's Steve Carrell's Dan, so I'm only grateful that I don't have any brothers. Carrell really is the man behind (seemingly) unintentionally hilarious characters who you can certainly sympathise with, if not empathise with. He was superb in 40 Year Old Virgin, and you feel almost as sorry for him here, as the man who simply does not know what to do about his ridiculous but undeniably fateful predicament. Juliette Binoche plays the woman, Marie, who is clearly torn between the stable, promising relationship she is in and the dream that she so fleetingly glimpsed with Dan, and she handles the role extremely well, but the really important thing is the fact that the two appear to have enough on-screen chemistry to pull it off. Their best moments involve one or other finding it impossible to avoid laughing - or crying - at the actions of the other, and the bathroom scene is simply superb.

All of the smaller roles are carried off well, from the brother (Dane Cook) to the three daughters, and even the parents, but it's the two at the centre that carry the movie, with Carrell being particularly normal and down-to-earth. It's funny because even the smallest sign of rebellion from him, the smallest gag (like with the cop who pulls him over) carries with it a big audience response, as we've been waiting all this time to see his character let loose.

It's difficult to see how this movie would not strike a chord in even the coldest of hearts - it's likely to hit the spot whether you're a natural born romantic or whether you have an aversion to romantic comedies, playing on the insightful rather than the clichéd, and allowing you to actually see the relationships evolve rather than have the results spoon-fed to you. And whether you're more the concerned father with precocious teenage daughters, the confused girlfriend who doesn't know whether to follow her head or her heart, or the lead character himself, who has finally found the chica of his dreams, despite it being seemingly impossible for them to be together, there are plenty of honest, well-played characters in this enjoyable little affair. Recommended.