Go on, you know you’ll use the wrist strap 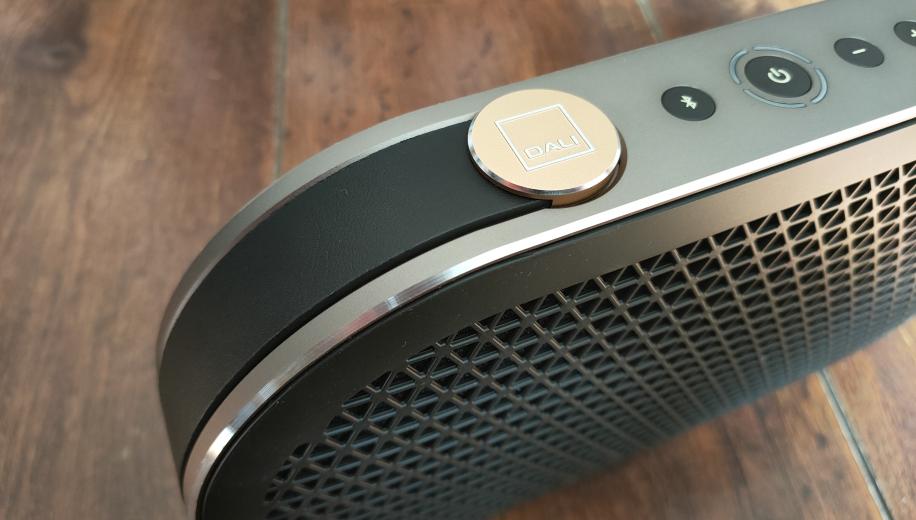 The Katch G2 takes a product that was already brilliant and makes it better. It looks good, it feels good and - most importantly - it sounds good. This is the best portable Bluetooth speaker you can buy.

Introduction - What Is the Katch G2?

The DALI Katch G2 is a portable Bluetooth speaker that has been designed to be as happy being used on a sideboard at home as it is on battery power, stylishly drowning out other people who had the same idea to bring a portable speaker with them that you did. As the G2 bit of the name suggests, it’s a revision of the original Katch that I tested and rated very highly indeed. This reassuring development of not fixing things that aren’t broken could really take off.

This means that the fundamentals of the Katch G2 are largely the same as they were in the original. The DALI is a slim flattened oval that contains a 21mm soft dome tweeter and an 89mm mid bass driver that has been designed to offer as long a throw as possible. This in turn is augmented by a passive radiator to give the DALI as much radiating area as possible. Each driver gets its own 25 watt Class D amp to drive it which, both in the original Katch and here too, seems to be more than sufficient.

Where DALI has gone to work on the design is the battery and Bluetooth fitment. The new battery is larger than before and now gives you a claimed battery life of up to 30 hours from a two hour charge. I haven’t done a run to flat on the time that the DALI has been here but the battery life does seem to be considerable. This is partnered with an updated Bluetooth implementation that now adds AAC to the aptX suite to ensure that Apple users can secure better performance from their devices with the Katch G2. There wasn’t a great deal wrong with the original but lack of AAC could be seen to be the most major omission so correcting this is welcome.

From there, DALI has got the tweaking tools out. The new model has better feet; important on a device that otherwise might suffer from somewhat marginal stability. Three new finishes are available, all of them firmly at the tasteful end of subdued. Something that hasn’t changed is the fitment of a 3.5mm auxiliary input and a USB charging socket. This means that the DALI can have something like a Chromecast Audio (departed but still available in quantity online) and assume most of the functionality of a more traditional home wireless speaker.

DALI hasn’t messed about with the general appearance of the Katch for the new model and that is no bad thing. This is a great piece of industrial design because everything about it is exceptionally well judged. It’s still small enough to be portable but without compromising on the basic requirement to have enough cabinet volume. The design is visually distinctive without being either gimmicky or overly fussy. It is also beautifully made. At £330, the DALI is at the upper end of pricing for devices of this nature but you can see where the money has gone.

In the same way that DALI has not messed with the design fundamentals of the Katch G2, they’ve left the sound pretty much as it was too. As this very definitely didn’t need tweaking, this is unquestionably a good thing. The DALI does a few things that cumulatively add up to something rather impressive. The first is that there is an improbable amount of low end from that slim cabinet. It’s not the sort of ‘too much power for the chassis’ bass either. The DALI delivers the crunching low end of Vox Low’s Something is Wrong with an agility and lightness of touch that works beautifully.

The upper registers are good too. The DALI is refined without being dull and, while I don’t feel it is necessarily the weapon of choice to test the absolute quality levels of high res audio, its performance over aptX in particular never feels anything other than spacious and believable. Like most devices of this nature, if you really lean on the DALI it starts to harden up a little but you do need to be fairly merciless to achieve this and at more sane listening levels, the Katch G2 is refined, controlled and engaging.

Actually, it’s more than engaging. The reason why I was such a fan of the original Katch is that it was genuinely good fun and this ebullience has been retained here. The euphorically weird Am I Really Going To Die by the White Lies absolutely flies along on the DALI. It’s a combination of the surprising heft, the control it is wielded with and the integration of those two drivers as well as a few other variables that leaves the DALI able to engage the listener in a way that so many of its notional rivals cannot. What’s more, the manner in which this is presented means that the DALI is fun for most people in the room rather than only for the people sat in front of it. As with the original model, you can pair two up for a stereo pair as well and, while I think that is a slightly pricey solution for something still fundamentally Bluetooth based, I suspect it’ll be a riot.

There’s not huge amount to add here other than to say that DALI has taken a speaker that was excellent and then gone and made it a bit more excellent. You can reasonably comment that the price that the Katch comes in at puts it in competition with more flexible wireless speakers but if you don’t need that (or simply bolt a Chromecast on it) that’s not an absolutely compelling argument and it does nothing to alter the small matter of the Katch G2 sounding absolutely brilliant. This is the best portable speaker you can buy and an unquestionable Best In Class.