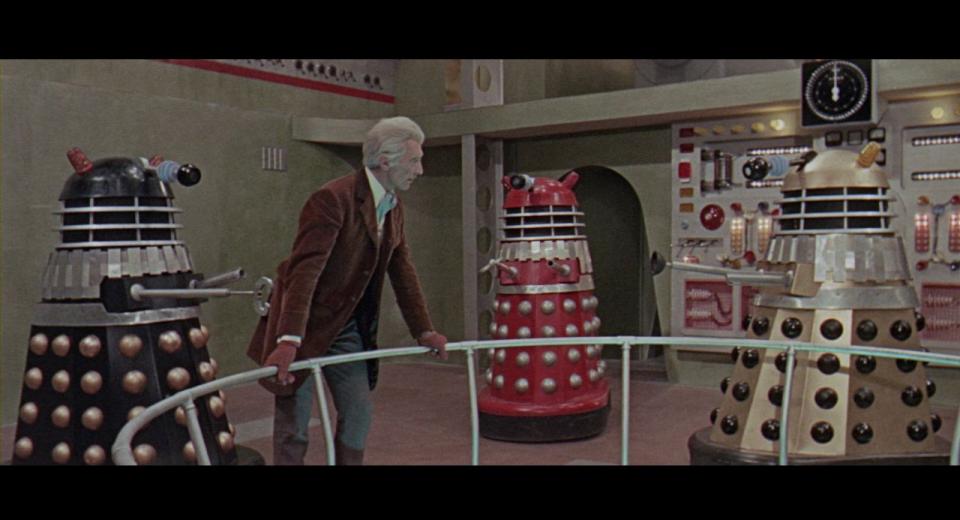 “Have you just escaped out of that spaceship that’s just landed?”

The Daleks invade Earth in a restored print that has been transferred via AVC and decorates a 2.35:1 frame with rubble, explosions, quarries and Robo-Men!

The restoration, whilst superb, still leaves the odd hair in the gate, and the odd nick and wobble, and there are some scratchy vertical lines during one or two shots. But grain is intact and nicely resolved. There’s no clumpiness going on, and none of it muddies-up into noise. Like its predecessor, the texture is very film-like, and very pleasing to the eye. John Wilcox’s widescreen photography is quite sublime. Whilst the action sequences are fast and furious – the van skittling the Daleks is terrific – it is the interiors that showcase some wonderful compositions, such as the inside of the cabin that the two women occupy on the outskirts of the Dalek mine, the tunnels of the mine, itself, and the Dalek command bridge.

Yes, you can still see the wires holding the Dalek mothership.They haven’t been removed like the ones helping Harryhausen’s harpies in Jason and the Argonauts! Now, whilst I applauded their removal from that restoration, I don’t have any qualms at all about them remaining apparent here. Of course Subotsky and Flemying would rather that we didn’t see such things, just as the late great Ray Harryhausen would have insisted had he the technology at the time of Jason’s production but, somehow, they just work here in Invasion as part of the overall camp hokeyness. I’ve taken a screengrab of how they look during that introductory scene with the saucer. Some optical shots that combine miniature (I can hear Peter Cushing saying the word now – Minnie-ay-chew-orrr) model work with matte-paintings have that obvious quality about them. You know that isn’t edge enhancement going on, don’t you? There’s nothing of the sort going on, but these vintage FX shots often betray their source photography and visual integration as such.

Depth is pretty decent again. This could have looked as flat as a pancake, and there would have been nothing wrong with that. But I would say that both interiors – especially the more bustling Underground HQ – and location work boast reasonable spatiality. Contrast consistently scores well and the overall image maintains a level of authenticity. Darker areas are appreciably dark and highlights are not blown. Blacks are good and earthy. Once we leave the blighted city, the countryside looks appropriately pungent and damp – good, faithful and realistic, in other words. The black of the Robo-Men costumes is shiny and all very Mod, the plasticy gleam and the gold zips setting them off nicely – if you like that sort of thing. Shadow-play is more than up to the task, as well, with some subtle variances in the gloom, and nothing swallowed-up or swamped by the shade.

Colours are rendered with crispness where necessary, such as the red-piping on the Robo-mens’ helmets, the flames of explosions and the vivid posters on the walls, but this is a much more subdued affair than Flemying’s previous Dalek entry. The metal fascists don’t appear quite as boldly alluring as before, either. There are a lot more of the pale blue variety this time out, but the overall aesthetic of the movie is deliberately less striking. We are on Earth, you see … and the cities have been reduced to ash. The countryside fares little better due to the overcast and autumnal conditions. Skin-tones and eyes are extremely naturalistic, so pinkish complexions look very convincing.

At a push, I would commend this as being more detailed than Dr. Who and the Daleks. It is grittier, of course, and let’s face it, mounds of rubble and blasted buildings, shards of wood and real grass and trees in the countryside seem to offer up more finite things to scrutinise than fake sets and smooth corridors. Naturally, the further away things are- wooded copses and rooftops, say – the less clear and distinct they appear. But the image is strong, stable and reliably finite where it counts. Close-ups are very good. The Daleks looks excellent, of course, but faces like those of Cushing and the Cribbster yield lots of finely resolved information. Although it is tempting to say that Peter Cushing, now a little older than in the previous film, has grown into his duffer’s makeup, this wouldn’t be strictly true. His whitened locks and whiskers cannot betray a real sparkle in the eyes and tightness of his admittedly gaunt face. Certain shots clearly reveal a much younger man beneath the stick-ons. But look at the little paper-plates of Dolly-Mixtures! All quite splendidly defined.

Another fine and faithful restoration, folks. “The Daleks are going to extract the metallic core of the Earth. Some insane idea of piloting the planet and using it like a giant spaceship.”

As with the previous entry, this is fine stuff. There’s a level of depth that is quite satisfying, given the limitations of the source and the vintage of the design.

That raucously brazen and jazzy main theme trots out with gusto, and the score, elsewhere, does well not to overpower everything else. It would have been easy to boost it in an effort to make things sound more energetic. The action, which has explosions, crashes, thrumming spaceship engines, gunfire and Dalek weaponry blazing away, is more audacious and elaborate than in the previous film, and the transfer caters well for the wider spectrum.

Dialogue can sound brittle at times, but there is a rewarding level of clarity. Once again, there are some great voices to be savoured here. Obviously, the best of the bunch is that belonging to the king of enunciation, Mr. Cushing. That quirky little Scottish intonation that I noted him making in the first film once again crops up. Only in certain words, mind, but it is there, and it adds a little odd displacement to the character. There are some curiously high-pitched screams from the assorted combatants – like that banzai shriek from the rebel who leaps onto the Robo-Men – and these sound quite comical, though they are undoubtedly faithful to the original mix.

Little details, such as the scuffling of shoes on mounds of brick (makes a change from that incessant click-clacking of leather on tiled floors that the sixties was inundated with … although we do get some of that in the Dalek saucer, too!) and the groaning of masonry, girders and wooden joists are given room in the mix. The circuits and electro pulses in the command bridge are another delight. Especially as this film is, otherwise, far more “grounded” than the first one.

The audio is nothing spectacular, but it is more than capable of giving life and energy to Gordon Flemying’s second, superior Dr. Who escapade. I'm awarding it a 7 out of 10. There is less on offer here than on the disc for Dr. Who and the Daleks, and what there is feels like just so much rehashed cut 'n' paste. I would have loved a commentary track to run alongside this. The one for Daleks is utterly superb and really helps you to appreciate what went into the production.

Restoring Daleks: Invasion Earth 2150 AD. This runs for seven minutes and takes a look not just at how the film was scrubbed-up for this release, but at how Flemying used Techniscope to explore the possibilities of Doctor Who’s cinematic potential. The scanning process and the colour-grading and the damage-repair stages are covered in pretty much the same way, as is the audio clean-up, in an almost identical fashion to the featurette found on Dr. Who and the Daleks. Some nice elements are picked-up on.

Interview with Bernard Cribbins runs for only four minutes but it is nice to hear from him. He’s a very likeable chap, and he supplies some fine, if brief recollections of his time fighting Daleks, and working with Peter Cushing.

Interview with Gareth Owen is only around four minutes long and, like his little input on the previous film’s disc, the audio is unaccountably appalling. Nevertheless, he delivers a detailed, if potted account of the film’s production and reception.

Stills Gallery and a Theatrical Trailer round off the package. Much more fun than its predecessor, Dalek s Invasion Earth 2150 AD (quite a mouthful, that) is a rip-roaring war-story that totally embraces the British have-a-go attitude and flair for grungy pitching-in. Taking its cue from the derring-do of the French Resistance, the film gives us plenty of pluck and courage amongst the rubble of a blitzed London, and ups the action and the bodycount quite substantially. There’s comedy and fun SF, but the film also has a ruthless and cynical edge to it that is actually a refreshing stance in what is, outwardly, a family fantasy.

The ensemble cast gets split up and go on a variety of little escapades, and the Doctor is certainly more sidelined than you might expect, but Peter Cushing still runs the show, and comes up with all the ideas to save the day. And the planet. The Daleks are typically excellent value, spouting Nazi-esque propaganda and looking inordinately cool, even when arising from the Thames, or spinning out of control.

Sealing the deal is another great transfer from StudioCanal that gives detail, grit and verve to the future struggle, which can only help to alleviate the pain of a lack of extras. What we get is okay, but a commentary would have been a lovely touch. I’m sure the Cribbster could have waggled his tonsils alongside Marcus Hearn, perhaps.

Side by side, the two Cushing Dr. Who movies are, aptly enough, the perfect time-capsule to an era of adventure and escapism that was both looking forwards to utopia and yet painfully saddled with the knowledge that mankind simply cannot and will not integrate, and that it will always stick its oar in and adopt a foreign policy in other creeds’ conflicts. Swap the Daleks for either the fascists or the Commies and you have a handle on their insidious inspiration. But Invasion also wisely points out that in times of national crisis, not everyone opts to pull together. There will always be those chancers who will turn their backs on their friends and allies and side with the enemy to better their own predicament. Perhaps Milton Subotsky’s script was just thinking back to the Second World War with its tropes of occupation, resistance and collaboration, but I believe it still prescient to the human condition today, and probably forever.

And a bloody big flying saucer. On strings!!!!