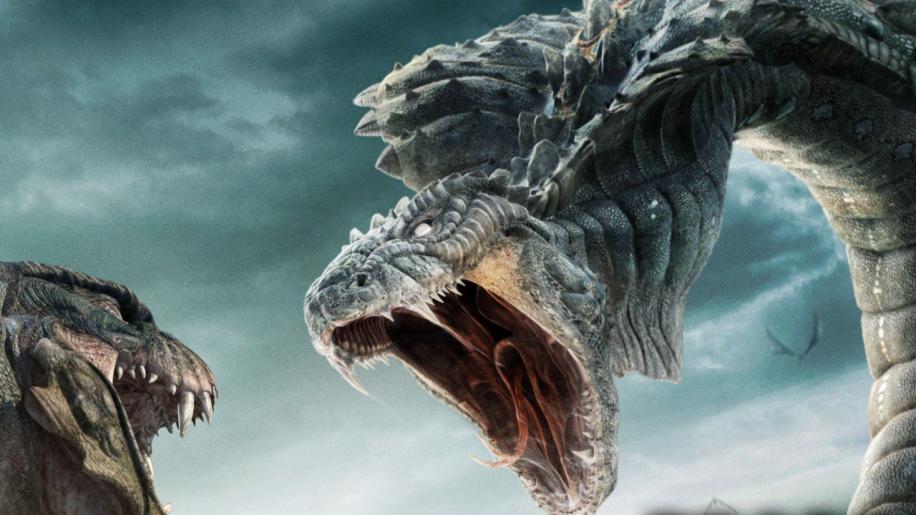 You thought that it was safe to settle in that comfy chair of yours safe in the knowledge that those cheesy but ultimately fun (after a few beers anyway) rubber suited Godzilla thrillers in vanilla ice-cream had passed long into the depths of celluloid hell. Well think again because the 'B' movie is back with a vengeance. Well really it never went away if you think about it; from the far east we have the wonderful Host to contend with which has all the hallmarks of this genre and even the big budget Hollywood suits brought us ID4 which is just a blast from the Commie hating 50s past. No they never went away, like their subject matter before them they just swallowed some new radioactive CGI material and got bigger, literally.

So it begins, a mumbled and totally incomprehensible history lesson from Jack (Robert Forster) about ancient lands invaded by dragons, the evil Imoogi, or Buraki. The Buraki coveted the Yeouijoo, a gift from the heavens and ultimately drove it insane. A rampaging army, followers of Buraki, determined to capture the Yeouijoo storm a small village because the Yeouijoo has bonded with a small girl. This way the Yeouijoo is protected somewhat; however it is the girl's ultimate destiny to bond with the good Imoogi so the good dragon can descend to heaven and bestow goodness on the whole earth. It is this girl's destiny to repeat this every 500 years, to be reborn, to offer up her soul for the cause of the good Imoogi whilst keeping the Buraki from devouring it's prey. To guard her against the Buraki her protector will share the same fate, to be reborn every 500 years to protect his love. Told you, try and keep up please!

All of this is told to a small boy, Ethan (Cody Arens) in modern day and he is informed that it is he who has been reborn; it is he who must seek out his new love and protect her from the evil which awaits. Now that's a pretty big burden to land on someone who's only 10, but I do suppose that they grow up so quickly these days. We jump to the present day; Ethan (Jason Behr) is in his early 20's, a reporter for some news channel. Slowly he starts to see the prophecy come true so he seeks out the woman who holds the key to this mystery; the woman, Sarah (Amanda Brooks), whom he must protect before she reaches her 20th birthday. Standing in his path is the evil Buraki, a snake, lizard creature devoid of pity and intent on swallowing Sarah whole to merge with the Yeouijoo. From here on in, it's cat and mouse.

That's it really, there's no depth to the movie at all to look into, so don't go in here looking for method acting or taught direction. This is intended to be exactly what it is, a fun popcorn type of movie which will be destined to travel the wastes of Middle Americas drive-ins for years to come. The director, Shim Hyung-rae, seems to have a thing for dragons having made a few feature films with them in his past. He's firmly entrenched in fantasy cinema with titles such as Power King (Power Rangers power up) and Dragon Tuka (time travelling romp with... dragons) and he shows no deviation from the formula that has earned him a few bucks over the years. Intending this for an American audience he chose an American setting, American actors and American sensibilities and this is where the system falls down somewhat. I have enjoyed the emergence of Korean cinema over the past few years with some fresh talent appearing from those borders, what we have here though is by the book, regurgitate the plot and characters, make it for the bucks production. Of course there's nothing wrong in that per-se, Hollywood do it all the time with degrees of success financially and artistically but unfortunately this tale is not told well enough to be enjoyable to that degree.

The story loses you before it begins, well it did for me anyway and I found myself rewinding a couple of times just to piece together the story which Robert Forster inflicts upon the small Cody Arens; god knows how the wee boy (a) took it all in and (b) remembered it all later on in his life. Forster must have left a lasting image on him. The history story though is where this ultimately should have been played out, the medieval nature of the dragons with hoards of Mordor type armies suited that time period, updated it turns into a run hide, run hide affair and looks a little out of place. Jason Behr wades through his part only wondering if his perfectly coiffured hair is standing up to the strain of running round another corner. Amanda Brooks is also sadly lacking in the acting department and I fully expect her to haunt the hospital dramas of American afternoon television. Perhaps I'm being a little harsh, after all both do have busy schedules with work flooding in for 2008 so it'll be interesting to see where they end up.

Direction is almost non-existent, the scenes stumbling from one to another without any real sense of cohesion. The areas with Buraki rampaging across the landscapes of past Korea or downtown Los Angeles fare well enough and perhaps they should have left it on an animation front. CGI anime, now there's an idea; Pixar take note! The end result of the good and evil Imoogi battling for Sarah's immortal soul sounds as though it would have been a good enough ride but all too frequently the battle is lost in murkiness and you wonder just which one is winning. Anyway, think about it this way... you're Sarah the good Imoogi wants to consume your soul for the good of mankind, the evil Imoogi wants to consume your soul so he can have a good party at everyone else's expense; bummer either way for Sarah really. One way or another it looks like old Sarah is going to be souless and that pretty much sums up this film.