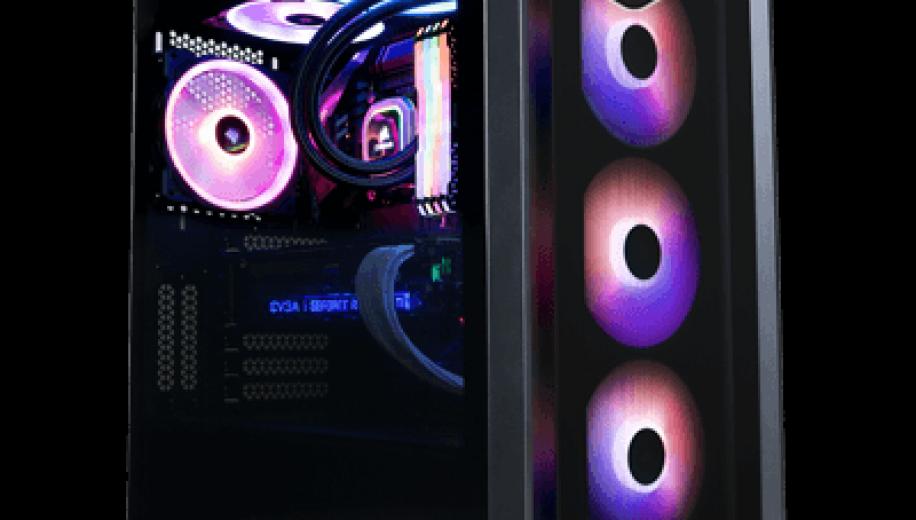 It is strange times we currently live in, for most going outside, seeing other people and doing sports or other activities has become something we can currently only dream of. Hopefully, there are only a few more months before we are back to normal and can get back to doing whatever we want, but for now lockdown is still a reality.

An activity that has seen an increase during lockdown is PC Gaming. Whether that be a sneaky session whilst you are ‘working from home’ or something to keep the kids occupied, it is an activity that has helped to keep a lot of us sane. Gaming PCs these days are easy to build yourself, but for those that still are nervous about it or just can’t be bothered, there are many popular custom PC builders.

One such builder is Cyberpower, the supplier of our Gaming PC for this review. For gaming PC fans Cyberpower will be one of several custom PC builders that are familiar to you. If not, Cyberpower Inc was originally founded in the US and is one of the leading brands in the US computer market. It offers a full range of customisable PCs for all budgets, along with next day PCs and Laptops. This is our first Gaming PC review for a long time here at AVForums, but one we hope to reintroduce as an ongoing feature from now on.

This Gaming PC is from Cyberpower's iCUE Infinity range, retailing at £1749 and features Corsair’s 4000X series black gaming case with the Corsair iCUE lighting and customisation software, Intel i7-10700KF CPU, MSI 3060 GPU, 16GB RAM and a 500GB M.2 SSD and 2TB HDD. Read on to see how this beast performs in our tests….

The Corsair iCUE 4000X is a mid-tower case with an all-black design and a clear tempered glass side and front panel revealing the goodness inside. It’s a clean design with a sleek look and features RGB lighting to the front three system fans, RAM and CPU cooler, which are all controllable by the iCUE software. Whilst the lighting looks good, it’s a little understated for our liking with no lighting to the GPU, rear fan or the top radiator fans.

The case is vertical GPU mount ready and has plenty of features including relocatable SSD trays and a PSU cover to hide all the cables. It also has the space to fit up to 6 x 120mm or 4 x 140mm cooling fans along with a 360mm radiator in the front plus a 280mm one in the roof.

The connections are all to the rear and top keeping the clean design to the front which just features the Corsair and Cyberpower logos. To the top we have the power button, 1 x USB 3.0 (always on), 1 x USB 3.1 Type-C, audio/microphone jack and a reset button. The top of the case also features a removable black mesh style magnetic flap, presumably to aid in keeping the radiator dust free.

Whilst the lighting looks good, it’s a little understated for our liking

To the rear are all the connections from the MSI Z490-A Pro motherboard. Here we have 1 x USB 3.2 port, 2 x USB 3, 2 x USB 2.0 and a USB 3.1 Type-C port. Along with the usual 7.1 audio connections, we have the 2.5G LAN port and the old favourite PS/2 keyboard/mouse connector. Finally, we have an HDMI port and a Display port which are completely redundant due to the i7-10700KF CPU not featuring onboard graphics. The MSI RTX3060 Gaming X GPU does feature 3 x Display Port 1.4a and a single HDMI 2.1 port.

Part of paying for someone else to build your PC is the professional finish, component installation and cable tidying. With this PC the cable tidying is top notch creating a very clean look to the inside and to help create the most efficient airflow. Normally Cyberpower charge £19 for a professional wiring install, but that is included with this system due to the design of the case. If we were buying a prebuilt PC we would expect that to be included anyway. For such a small cost it would make sense for Cyberpower to include it as standard across their range. The PC weighs 13.8kg in total and measures 460mm high x 230mm wide x 452mm deep.

The price of this system is currently £1749. We say currently as it has already gone up £60 during the time of writing this review due to the current GPU supply issue. It's firmly in the mid range specification which our tests later in this review will confirm. If you are looking for high quality 1080P gaming then this specification should be exactly what you need.  The i7-10700KF is a 10th Gen 8 core, 16 thread CPU released in mid 2020. The Corsair Vengeance memory is 2 x 8GB with a latency of 16-18-18-36 and featuring an anodised aluminium heat spreader, plus the all important RGB lighting! If you take all the components above, the individual cost comes to around £170 less (crazy rising GPU prices dependant of course) and whilst building a PC has never been easier, some people just don’t want the hassle and there is nothing better than a complete new Gaming PC arriving and ready to use! For just £170 you are getting the system built, tested and you have included one of the best system warranties we have come across, that being a 5 years’ labour, 2 years’ parts, 6 months’ collect and return plus Life-Time Technical Support. Additional warranty options are an increase to 1 years’ collect and return for an extra £19, 2 years for £79 and 3 years for £149.

There should also be plenty of life in the PC for upgrading as the MSI Z490A-Pro supports up to an i9 processor, can take up to 128GB 5000Mhz DDR4 RAM, includes the Realtek RTL 8125B 2.5G LAN and has plenty of USB ports including Type C. The case also has plenty of room for larger graphics cards, although the MSI RTX 3060 Gaming X that it comes fitted with is a hefty beast anyway, plus room for further 2.5" drives. About the only thing missing is Wi-Fi and as previously mentioned the F part of the Intel i7-10700KF signifies it does not include any onboard graphics, although the K does signify that it is unlocked for overclocking.

Thankfully, the Windows installation arrived very clean. No pre-installed bloatware or even anti-virus software. Included in the box is a code for a year’s free subscription (3 devices) to BullGuard Internet Security and a code for 30 day’s subscription to BullGuard VPN (6 devices).

The only software pre-installed is the well laid out, powerful but simple to use iCUE controller software. This software turns the PC into ‘a cohesive, fully immerse ecosystem with intuitive control’.  This allows you to control the system lighting of all compatible components in one go with RGB colours and various effects. It offers third party integration so it isn’t limited to Corsair products and can even control the lighting in your room if you have a compatible product!

The software also features a dashboard which gives a real time overview of the system performance, including temperatures, fan speeds and memory utilization. You can also create custom fan curves and set custom lighting modes to alert you if the system temperatures get too high. Customisable profiles are included such as a Audio/Quiet mode, Game mode and Movie mode.

Our new test suite of benchmark programs includes Geekbench 5, 3D Mark, PC Mark 10 and for gaming we test with GTA5, Shadow of the Tomb Raider and Cyberpunk 2077. As we review more gaming PCs these charts below will become comparison charts.

With the benchmark tests, the system performed very slightly above the average with Geekbench 5, Timespy and PC Mark 10 and very slightly below average with Firestrike. With no overclocking, it’s scores we expected for a system of this specification.

... it’s still reasonably quiet thanks to the watercooled CPU

The system has three front intake fans, two top and one rear mounted exhaust fan. The two GPU fans are idle when not under load. The noise level sits at a quiet 30dB when idle, it’s noticeable but more of a quiet background noise and under full load it increases to 41.1dB, you’ll notice the increased level but for a gaming system, it’s still reasonably quiet thanks to the watercooled CPU. It doesn’t sound like a jet engine trying to take off for example, which we’ve experienced with some gaming PCs and especially gaming laptops. Via the Corsair iCUE software you can set custom fan speeds to get the system working to your liking.

The Corsair iCUE Gaming PC from Cyperpower features an RTX 3060 GPU, Intel i7-10700KF CPU, 16GB RAM and a fast 500GB SSD. It all arrives impressively packaged to protect from couriers throwing it about and the wiring installation is top notch creating a very clean look to the interior. The order process was simple with update texts at all stages of build and despatch.

The Corsair case looks the part with a clear glass panel and RGB fans to the front. With lighting only to the RAM and CPU cooler, it would have benefitted from lighting to the top and rear fans and GPU too. It needs more bling! Another negative is the choice of the 10700-KF CPU which has no onboard graphics, if you ever have an issue with your GPU, onboard graphics is a must and there really isn’t much difference in cost between the K and KF variants.

The benchmark and gaming tests performed as expected for a system of this specification, showing that for 1440P at maximum settings it doesn’t quite cut the mustard but dropping down to 1080P gave better results such as 113FPS in the most recent Tomb Raider game. The system is very quiet when idle and not the loudest under load either.

Ordinarily we would say that a £1749 1080P gaming PC is extremely expensive, but given that GPU pricing has gone crazy the cost is in line with other PC builders such as Scan. If you are looking for a professionally built and tested system that comes with a superb warranty too, then this is one to consider.