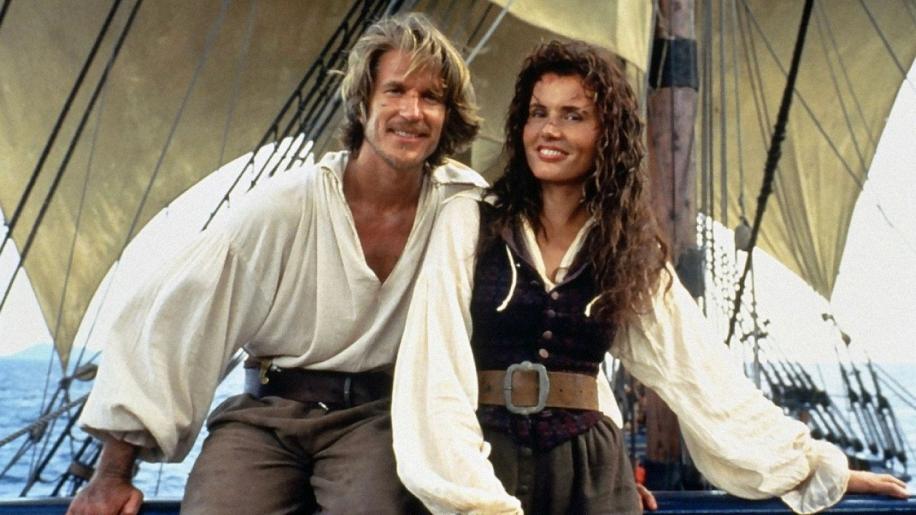 Framed at 2.35:1, the first thing you'll notice is that you need to manually switch off the Japanese subtitles. The second thing you'll likely notice about this anamorphic transfer is edge enhancement. As the opening titles appear in bold orange across the screen, they are accompanied by pronounced haloing. Not only that, but once the movie gets in full flow it appears in almost every scene. The masts and ropes of the pirate ships show this clearly, as do any objects framed against the blue skies, in fact I found it became rather off-putting as the movie progressed. Those with smaller displays might not find it quite a noticeable, but on our 7' review screen, it looked terrible.

Grain is also evident at various points in the movie, as are scratches which appear relatively frequently (especially near the beginning). Add in a little dirt which crops up now and again and we have a print that looks less than new.

I also noticed around 1:25:00 some terrible shimmering around objects: it's almost edge enhancement gone wild, with the picture seeming to break up around object lines. It's very fine, but certainly noticeable, and I found it lasted for a couple of minutes. So far it doesn't sound promising, but overall the transfer is of good quality. Relatively sharp, the transfer copes with the wide range of colours admirably. Saturation is good, with colours looking natural and defined: the blues of the sea in the some of the Cutthroat Island scenes look sublime, and the forest scenes look lush and rich and well defined.

Detail too, is good throughout, and this is particularly noticeable on shots where the camera sweeps past the ships. The lines, masts, sails and carving details on the side of the boats are all there to see and if it weren't for edge enhancement then we'd be looking at near reference quality moments. The sea shots, too, look wonderful with individual waves looking detailed and authentic.

With the layer change around 1:05:00 and placed in a quiet scene, this can be described as a workable but flawed transfer which could have been better (it reminds me of my old NTSC laserdisc pressing).

Previously the only way to own Cutthroat Island was on non-anamorphic R1 DVD or NTSC laserdisc and in the big-disc's heyday, this Dolby Digital 5.1 pressing was considered to have almost reference quality audio. Luckily we have a choice on this DVD, as the movie is presented in both Dolby Digital 5.1 (448kbps) and full bit-rate DTS (1536kbps).

Viewing the movie in DTS is a full on 5.1 experience. From the opening credits, the front soundstage reveals itself to be strong and vibrant, with good steering and precise imaging. Dialogue is mainly locked to the front soundstage but comes through clearly, even when the other channels are busy. Surround usage is liberal - though never overdone - with the rears providing ambience and adding weight to the action when all hell breaks loose onscreen.

It's worth noting that some of the very best surround moments are during the forest scenes on Cutthroat Island itself: the ambience created by the echoing wildlife is superb. Tropical birds flap their wings and caw and chirp all around us, and the mix is enveloping without being invasive.

LFE, on the other hand, can be considered invasive in a number of scenes (in a good way!). The bass rips through the room during explosions - there are times where the LFE hits the very low notes below 20hz - and adds weight and punch to the many fight scenes. The final explosion will likely bottom out many subwoofers, but surprisingly the most satisfying moments of LFE occur in the scenes where waves crash across the soundstage. Both at the beginning of the movie and the scene where Adams and Shaw plummet down the cliff face and into the waiting wave are great examples of this, and we really get a sense of the power of the sea.

So we've established it's good, but just how good is it compared to some of the newer soundtracks we hear on today's releases? Well it's good, but I wouldn't describe it as jaw dropping and there are plenty of other movies out there with stunning soundtracks which are even more dynamic, with even crisper steering and more enveloping surrounds. Saying that, however, the DTS soundtrack on Cutthroat Island is still excellent.

Fans of the movie will undoubtedly be wondering how the DTS compares to Dolby Digital, and this is certainly a pertinent question given the movie's imminent UK release. Well, switching between the two soundtracks makes the movie a different experience. I was expecting something subtle, but in fact the difference is night and day.

As soon as you switch to Dolby Digital the track sounds altogether flatter, compressed and not as pleasing. DTS is certainly louder and more aggressive and this applies to all channels. Dialogue comes across as clearer and the rears appear sprightly in comparison to the Dolby option.

LFE also shows marked changes. In Dolby Digital it doesn't extend quite as far down the hertz scale (if indeed your subwoofer can reach those bottom octaves) as DTS and it may be psychological, but it sounds woollier and not quite as precise.

To be fair it's a difficult comparison to make as the two soundtracks are undoubtedly recorded at different decibel levels, but I cannot see anyone choosing the Dolby option over DTS in this case (unless you're watching this DVD in midnight mode!). DTS is livelier, punchier and makes it an all-round more satisfying experience.

I would also add that the Dolby Digital soundtrack is still solid in delivery and if you didn't have the side-by-side comparison you'd obviously not know of any difference - given this, you'll be perfectly happy with the Dolby 5.1 option also.

If you can navigate the menus, there's a terrible quality (it looks like a pirate) anamorphic trailer in Dolby Digital 2.0 and if you're so inclined, you can also watched the Japanese version tooCheesier than a block of mature cheddar, this Japanese edition of the wooden Cutthroat Island offers us an excellent DTS soundtrack as the saving grace to a DVD with little in the way of extras and a reasonable - if flawed - video transfer.