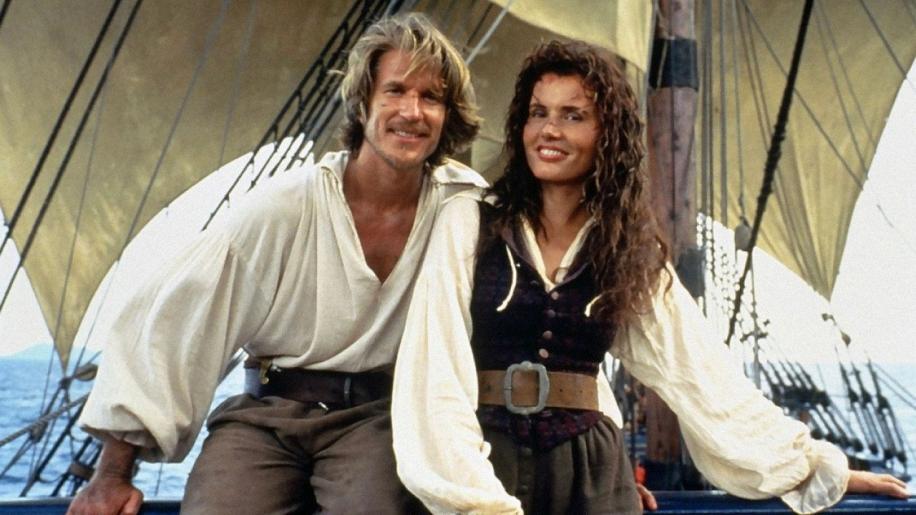 Often uttered in the same breath as the soggy actioner Waterworld, Cutthroat Island was universally panned when it was first released. Notorious for being a difficult shoot and being horrendously over budget, Renny Harlin's swashbuckling pirate yarn sank at the box office (excuse the pun) with only the scorn of the critics marking its passage. So is it really as bad as everyone thinks?Three pirate brothers hold three separate parts of a treasure map, which leads to Cutthroat Island, a mysterious place where hoards of Spanish gold lie to be discovered. When one of the brothers (Dawg Brown, played by Frank Langella) threatens to take matters into his own hands to recover the treasure for himself, he forces one of his brothers to commit suicide in the presence of his daughter (Morgan Adams, played by Geena Davis). Adams manages to secure her father's part of the map as he dies - tattooed as it is on his scalp - before rushing off to find the second part of the map in a race against Dawg and his crew.

Enter Matthew Modine as thief and trickster William Shaw, employed by Adams to translate the Latin text on her father's scalp, who in turn learns of the treasure and begins to plot his own fortune. Cue lots of double crosses, chases, muskets firing and cutlasses rattling as the two bands of pirate's battle to get all pieces of the map for themselves, and draw ever closer to the treasure...Let's get one thing clear. Cutthroat Island doesn't take itself seriously at all. It's got its tongue placed firmly in its cheek for the duration, drawing on many old pirate clichés as it swings from one set piece to the next. The script is hammy, the acting even more so, with the stunts going for pure spectacle rather than anything approaching realism.

It's extremely silly, and if you can approach it on this level then you'll have a blast. Otherwise, you'll find this action/comedy caper on the soggy side - the action itself could be accused of being uninspired, with the movie trying too hard to be spectacular (the cannon fight near the end is way too long for example) and not enough thought going into the script. Indeed, this all seems to be about stunts and not a lot else, as the script is more stilted than a pirate's wooden leg.

Still, if you can get past this, and want to switch your brain off to enjoy an action packed romp, then you could do worse.