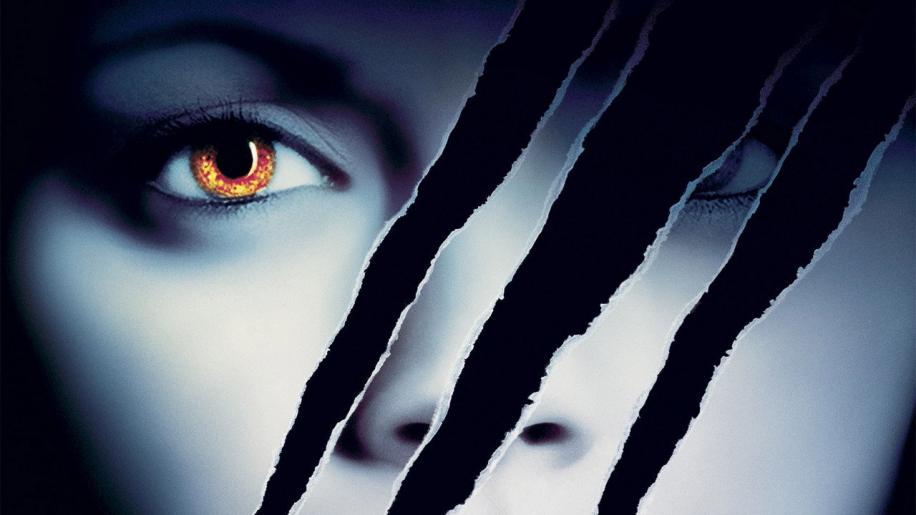 Wes Craven pretty-much revitalised the horror genre a few years ago with his Scream movies which parodied the age-old fondness for stupidity in the actions of the victims (don't split up, don't go in there alone etc. etc.). However, after the franchise dried up he set his eyes on a rather odd collection of disparate, consistently average, productions. The latest in this long line of standard horror vehicles is Cursed, a werewolf movie.

Ellie is a young lady with a typical life. She works hard for a boss who doesn't appreciate her, takes care of her younger brother Jimmy who is getting bullied at school and has a boyfriend, Jake, who is more than a little distant. One fateful night she is driving home with her brother when they hit something - perhaps a dog - and swerve out of control, smashing another car right off the road. After checking that the driver is ok, they are all attacked by what appears to be a giant wolf, some receiving worse injuries than others. Before long Ellie and Jake are both worried that something strange might be happening to them as Ellie starts becoming fond of the smell of blood and Jake starts being tempted by raw meat for dinner. All the while, the beast is plucking young victims off the street and it becomes apparent that it must be stopped - not just to end the killing but also to cure the siblings who realise that they have been cursed.

There has been a recent spate of werewolf movies, all of which (bar perhaps the slightly lacklustre popcorn actioner Van Helsing) appear to have brought something new to the niche. Top of my list would have to be Dog Soldiers, which was remarkably effective for a cheap Brit horror and had a great comic edge. Similarly the independent production Ginger Snaps had a slightly different take on the whole werewolf theme and with both a sequel and a prequel, I assumed that audiences would have had their fill of dog. Then along comes Cursed, helmed by a director who has previously been able to reinvigorate dead dogs and therefore in with a chance of being a hit. But it gets shelved, suffers rewrites and cast changes, re-shoots and seemingly endless delays culminating in a PG-13 re-cut to satisfy younger audiences and a subsequent anticlimax of a release. The end result is not a bad effort, it is just a bit of an odd mish-mash of clever concept, hackneyed plots and cliché-ridden dialogue.

You see, although Craven throws in enough plot twists to have you fairly confused towards the end, we have seen it all before. There's none of that Scream style of self-mockery, here the characters do all of those stupid things that no normal human would do - unless they were in a horror movie. People split up rather than stick together, go wandering alone and seem to simply look for trouble. One girl who is being chased by a beast takes all of two seconds to assume - to her detriment - that a lack of scratching and pounding on the door must mean that he just got bored and went away. We have gone back to the type of movies where you are constantly stunned by the characters' stupidity to such an extent that you wonder whether or not they are simply asking to get mauled. It is a style of horror that has already been done in every way, shape and form, right down to the old Teen Wolf adage that a boy who is bitten by a wolf suddenly becomes good at sports.

If there is anything to watch it for, it is probably Christina Ricci's heroine Ellie. Ricci has the same mysterious allure in terms of acting as she does in terms of beauty. I can't decide whether she is a good actress who has just got stuck with relative B-movies like this, or whether she is a B-movie star who occasionally gets a decent role in a film like Buffalo 66 that brings out the best in her. Similarly she does not appear to be outstandingly beautiful - she just has striking aspects of her features, like her huge eyes - that make you take that second look and make you realise that she is, at the very least, cute as hell. Here her acting is certainly enough to keep you interested, but it is not the kind of material to bring out a noteworthy performance. Her brother is played by Jesse Eisenberg - from The Village - and proves that being bitten by a wolf also gives you a better haircut and turns you from geek into 'chick-magnet'. Joshua Jackson, who has been trying to break out of his Dawson Creek origins for years now, seems to be trying really hard as the suspicious and mysterious boyfriend Jake, but his performance seems at times stilted. Perhaps thanks to one rewrite to many, some things about his character's behaviour just don't make any sense. Alongside Katie Holmes, I thought these two were the only ones likely to movie beyond the world of Dawson, but this is certainly not the vehicle for Jackson to prove that.

Aside from the core characters, we get a whole bunch of B-star cameos including the gorgeous Shannon Elizabeth, famous for being Nadia in the American Pie movies, here playing one of the victims, singer Mya - whose film credits include Moulin Rouge and Chicago - playing another victim, who gets to dress in a rather attractive cat-suit and Ally MacBeal's Portia De Rossi, oddly cast as a palm reader who foretells much of the mayhem. Michael Rosenbaum, aka. Lex Luthor from Smallville, pops up - looking slightly odd with hair - as Ellie's co-worker Kyle and the pretty Kristina Anapau from Cruel Intentions 3 gets a small role as Jimmy's love interest. Even Scott Baio (Chachi) gets a cameo, making me wonder whether Craven is determined to put the entire cast of Happy Days in his movies. As cheesy popcorn B-movies go, Cursed is perfectly enjoyable but does nothing particularly new or inventive to make it memorable or even distinguishable from the many, often superior, werewolf movies that have gone before it.

This release houses the unrated, extended cut of the movie which features much more violence, gore and swearing than the PG-13 theatrical release. Although the extra horror is largely CG and all the worse for it - it is nevertheless fairly excessive and certainly not suitable for the squeamish let alone the young. I personally find it hard to see how they could edit this down to a PG-13 cut without completely changing the effect but I guess they just left more to the imagination.