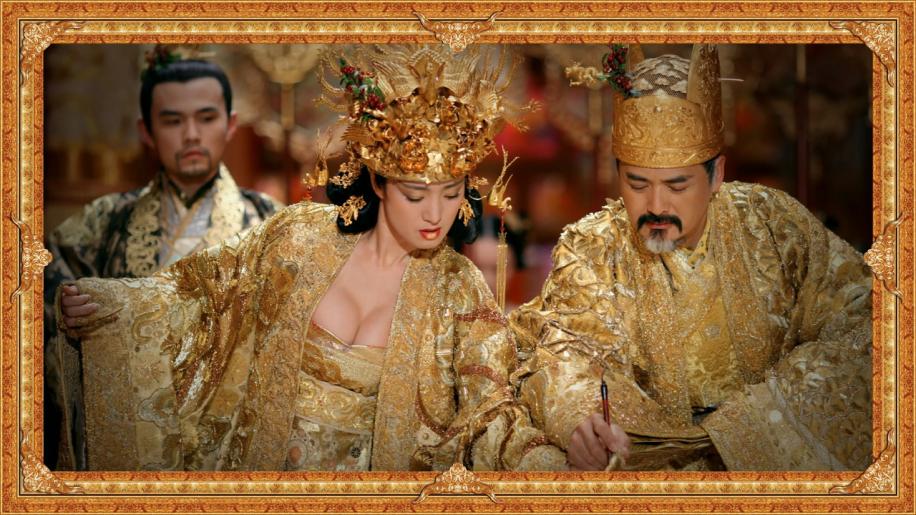 It all really started with Ang Lee's seminal Crouching Tiger, Hidden Dragon. Still my favourite of the 'wushu' epics, Director Zhang Yimou has certainly offered some worthy companion pieces in the same genre, most notably Hero and House of Flying Daggers. Now Zhang Yimou completes his wushu trilogy by pairing up with Crouching Tiger star Chow Yun-Fat for the lavish martial arts period drama, Curse of the Golden Flower? But is it a worthy follow-up piece or, like 300, a showcase of pure style over substance?

It's 928 A.D. and the Tang Dynasty is at the height of its power in China. But all is not well in the imperial palace. For starters the Emperor is a grumpy old man who rules with an iron fist and does not appear to be very nice to anybody, least of all his wife, who he is slowly poisoning with a drug designed to make her lose her mind. You can't totally blame him, however, as she seems to have lost the plot already - having been sleeping with her step-son for the past 3 years. When the son elects to leave the palace to learn more about the world, and at the same time leave the Empress, she plots to have the palace attacked and do away with the Emperor so that her step-son/lover can take over the throne.

Complicated? Well that's only the start of things - throw into the mix lashings of betrayal, incest, lies and deception, and you have as much drama as you would have in an entire season of Dallas. Add to that the most lavish costume and set designs imaginable, massive battles and some trademark wire-fu, and you have - at the very least - an extremely stylish period piece chock full of melodrama. The shiny outfits and thousands of eponymous golden Chrysanthemums, always displayed with dazzling symmetry, all look amazing and - in between father-wife-son shenanigans - certainly give audiences plenty to gawp at.

Although the epic battles try their best (on a comparatively limited budget) to offer a Lord of the Rings / Kingdom of Heaven scale grandeur to the events - and certainly provide us with plenty more to be visually amazed by - there is a distinct lack of martial arts mini-battles, the kind of which we have come to expect from the director given his previous productions. Sure, neither Hero nor Flying Daggers had quite the grand scale to them that can be seen here, but they both showed some much more engaging small-scale confrontations. Still, this epic was perhaps more about looking good than anything else, and it certainly succeeds in that respect.

In terms of acting talent, we have the great Chow Yun-Fat (Hard Boiled, Crouching Tiger Hidden Dragon) as the Emperor. He is tremendous in the role, bringing presence to the part and dominating the screen whenever he is on it, but I was a little disappointed (post-Crouching Tiger) at his lack of participation in the battles. He barely stands up for the whole event, and whilst this worked for the likes of Toshiro Mifune in Red Beard, you want him to at least have one standing battle to show off his skills. His character is also extremely dubious - depending on how you wish to interpret things, his role could easily be that of either the oppressed, powerful ruler who is surrounded by treachery and disloyal subjects and has to make some tough choices to retain his thrown, or as a corrupt, evil old man who will do whatever it takes - kill whoever he has to - to maintain control over his kingdom. I personally, preferred to choose the former, but the bittersweet ending certainly leaves a lot unanswered.

Opposite him, there's the elegant Gong Li (Miami Vice, 2046, Memoirs of a Geisha), looking a little worse for the wear as the Empress who is slowly being poisoned by her husband. She's also more than a little upset by the fact that her step-son doesn't want to sleep with her anymore, and her motivations to cause a rebellion and usurp the Emperor's position don't seem totally honourable. Still, she also brings a great deal to the role, and plays well opposite Chow Yun-Fat. Relative newcomers Chou Jay and Liu Ye play the two elder sons and debut actress Li Man proves that, even in a sea of perfect corset-clad beauties, she can still stand out.

Overall I think I was a little disappointed by Curse of the Golden Flower. Sure, it is a marvel to behold, with every shot being freeze-frame fantastic, but for the most part it feels like a case of style over substance. And it is not as if there is no substance - they try and cram in almost too much in terms of treachery and incest, making the whole family self-destruction seem all the more contrived. I know that none of these wire-fu period epics have ended in a particularly happy fashion, but this was almost one step too far. And considering the depth of plot-design afforded to the excellent Hero, I was disappointed by the story here. Add to that the fact that it was very difficult to sympathise with any of the main characters (do you choose the old emperor who is poisoning his wife because she's sleeping with his son, or do you side with the empress who is being poisoned by her husband because she is sleeping with his son?) and the lack of integral martial arts mini-clashes (the Spiderman ninjas chasing after the horse-riding warriors provide the most fun) and you have a fairly flawed movie. On the flipside, this movie looks astounding and is almost worth seeing for that fact alone. The weakest of Zhang Yimou's wushu trilogy, Curse of the Golden Flower is at least the shiniest, most lavish of the three period pieces, and it is not a bad watch, just a flawed vision.