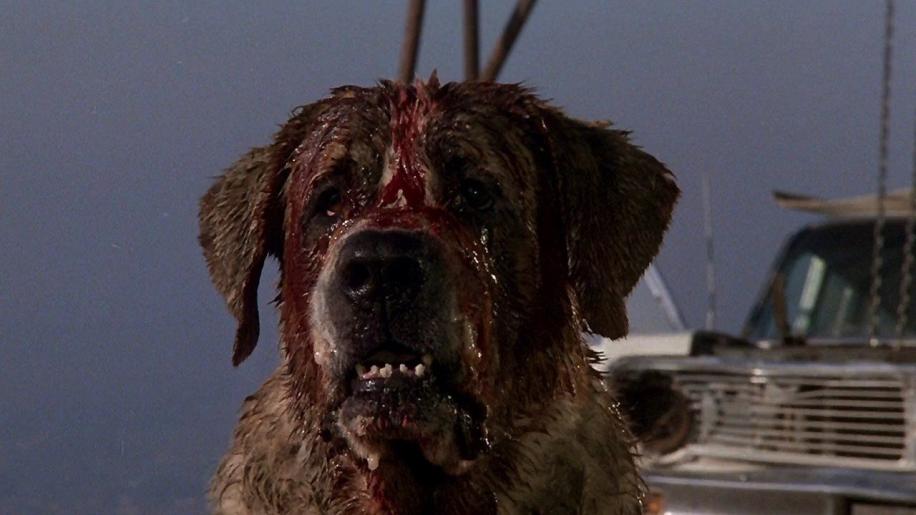 I was a thoroughly nasty child. I wasn't necessarily into blood and gore, but I was attracted to reading about the nasty side of life. I wanted my horror to be grounded in reality. I didn't want my books to be a Disney fairytale where everyone lived happily ever after. I wanted sad, realistic endings. I wanted darkness.

Although I am still a Stephen King fan today, in my early teens I was growing up when he was at the peak of his powers. And one of his nastiest books became my favourite. Cujo is the one book that King has said he would consider rewriting. It is a bleak, nihilistic study of a relationship breakdown framed around a brilliant horror setup. Although on the surface it is a tale of a woman and a child, trapped in a broken-down car and being relentlessly attacked by a rabid dog, it is actually so much more than this. Every character in the book apart from the poor young boy is flawed. There is a pervading sense of sadness hovering over proceedings, of events moving out of control beyond anyone's understanding. The book absolutely drips with metaphor, and is probably THE one perfect example of why King is so successful as a novelist - this ability to take a horror scenario and turn it into so much more. There is no happy ending in this novel.

Just two years after the novel was published, along came the film version directed by Lewis Teague. The film originally had a screenplay written by Stephen King that introduced one major departure from the novel, and that was in the conclusion. Although King's script was never used, his ending was - as the original novel's ending was considered just too depressing for cinema audiences. The reasoning was that you could get away with things on the page that you can't on screen. Apart from this one change you could argue that this is one of the most faithful screen adaptations of any King novel.

Cujo focuses on the Trenton family - Dad Vic (Daniel Hugh-Kelly), Mum Donna (Dee Wallace-Stone) and son Tad (Danny Pintauro). On the surface, this is the perfect American family. Young, fit, successful, going places. But the film is about what is going on under the surface. Vic is a workaholic advertising executive who is in the process of losing his biggest client through no fault of his own, Donna is having an affair with the local stud as she is feeling neglected, and as the parent's relationship disintegrates Tad is being used as a pawn between them.

Vic discovers Donna's infidelity after she has ended it, but instead of staying and sorting things out he travels across country to save the account. He leaves instructions of what Donna should do with their broken down car, take it to the Camber's yard and get it fixed. Unfortunately, the Camber's yard is way out in the countryside, it is the middle of summer, and the Camber's beloved dog Cujo has been bitten by a bat and has gone rabid. When Donna and Tad arrive at the yard they are on their own, the car breaks down, and Cujo wants to dine on the occupants.

This is most certainly a bleak plot and is extremely well handled by the director Teague. He paces the movie extremely well, and is always respectful of the source material. It always amazes me that in the pantheon of King adaptations, this film is not more highly rated. It may not be on the level of Stand By Me or The Shawshank Redemption but like Rob Reiner or Frank Darabont, Teague seems to understand what makes King's source novel tick. Therefore, he does not skimp on the character moments that make us truly feel for the Trenton family. Without these, the latter quarter of the movie with the dog attack simply would lack the emotional punch to make it truly successful. The image of an out of control dog attacking a mother and child may well be horrifying, but the effect is magnified when we care about the participants as we do here.

Likewise, Teague recognises that the source novel is about fate, and makes sure that this is reflected in the movie. The mantra “No, nothing wrong here” as uttered by Vic's advertising campaign is used to reflect the fact that in reality “Everything is wrong here”. Character beats between Vic and Donna reflect the chasm of feeling that exists between them, a gap that both of them would like to bridge but simply do not know how. Tad is a child who is deeply affected by his parent's situation, a fact that manifests itself in his fear of monsters in his closet. Only his Dad can stop these monsters using the “monster words” but of course, when the real monster turns up, his Dad is not there - a symbol of his priorities. Even Cujo himself is merely a victim of circumstance, a loving family pet who does not understand why he feels the way he does, he just knows he is compelled to kill. The use of a St Bernard is a masterful stroke - Cujo's great big sad eyes managing to make you feel sorry for the beast even as he is terrifying you.

All this should make you realise that although there IS horror and gore here, it is tempered by emotion. And it is this strength of emotion that enhances the horror. You only have to witness Tad, crying in fear, the tears running down his cheeks to feel affected by the film. This is horror that is grounded in reality, and this makes it so much more frightening.

As previously mentioned, Teague seems to understand what makes a great King novel, and he manages to bring it to the screen effectively. He has a great eye for a shot and is aided by his cinematographer - Jan De Bont in one of his earlier jobs. You only have to view one particular scene, set inside the car with the camera panning around faster and faster, Tad in tears, and Donna drained and lost, to realise just how clever the direction and cinematography is.

The performances are also superb. Danny Pintauro is fantastic as Tad, managing to essay a character that is going through things that no child of that age should experience. He couldn't read at the time, having to learn his lines by rote - but the level of fear he puts into his performance is quite amazing. Both Dee Wallace-Stone and Daniel Hugh-Kelly (in his first film role) put in excellent work as the couple who have forgotten how to truly communicate with each other - managing to portray their characters with subtlety.

If there is a flaw in the film it is that it does not entirely fall into one particular genre. Those expecting a complete horror film are likely to find the time taken to get to the dog attack rather boring and slow, whereas those who are more interested in the character relationships are likely to find the final quarter of the film upsetting and horrifying. But those who recognise the genius of King's writing are likely to find that this is one of the best adaptations of his work they have seen. It may not be a film that was ever likely to win awards (the subject matter is not mainstream enough for that) but as someone who has seen pretty much every King adaptation committed to celluloid I would certainly put this in the top ten. If you are a King fan, and have not seen this film then you should not be afraid to shell out - you are extremely unlikely to be disappointed.