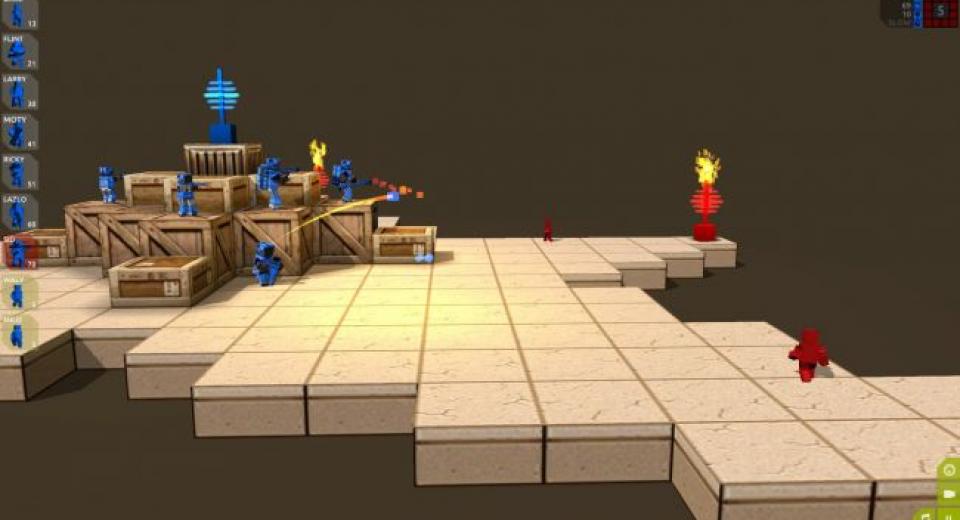 The games industry has never been so full with games flying at consumers from every direction, every corner of the planet and even from the smallest of development studios. It seems the giant AAA companies out there are no longer as untouchable as they once thought with many independent projects and games coming through the Xbox Live Arcade, PlayStation Network and Steam Greenlight. As such, many people are getting plenty of bang for their buck at a discounted rate opposing the industry-set £40 price tag of console games at retail.

Steam also gives developers a more accessible place to publish and sell their games and one such game which has come through Steam is Cubemen 2 which has released following the success of the first game which was released last year. As the name suggests, the game revolves around soldiers fashioned from cubes fighting it out across different stages or arenas. Developed by Australian team 3 Sprockets the title offers up strategy and action in abundance across a series of different modes and challenges.

The indie developer has taken on a well-known genre (one which has been done to death if we're being honest) and puts a unique spin on things not only with the visuals but also the way in which the game unfolds. Being a strategy title, the game revolves around objectives and defence scenarios which must be completed in order to progress and complete each mission. The single player mode allows you to play in several different ways which is quite nice. You can play the campaign as a string of defence missions where a series of angry Cubemen try and destroy your base whilst you see them off in a similarly aggressive manner. Other modes (available both for offline and online play) allow you to compete in modes whereby you have to escort friendlies to your base and see of attackers or compete in a familiar capture the flag mode. Together these modes give you plenty of incentive to stick with Cubemen 2 and each mission never plays out the same way twice so repeating missions isn't always a chore either.

So as mentioned, your little cube friends pit themselves against similarly shaped adversaries across different levels which differ greatly depending on the format you're playing. The more teams there are present in one game, the bigger the level and some objective modes feature more challenging terrain and obstacles to avoid. The level design doesn't lend itself to huge amounts of strategic play that's for sure but enough for you to think about where you will be deploying your units next.

Your units differ greatly in size and capabilities too, each with their own cost to your budget and levels with which they will damage any wrong-doers approaching them. Your basic, and cheapest, units come equipped with decent range pistols and your more expensive units come with electricity-firing rods or rocket launchers. The names given to these takes some getting used to in order to remember their equipment and function but it comes with time. Cubemen 2 is a crisp and un-cluttered affair with a 'less is more' attitude towards its appearance and menu system which can be a major downfall for some strategy titles out there. If anything, it looks as if the developers have taken inspiration from Windows 8 for the most part in order to style their menu screens which is no bad thing at all. It takes its appearance but gets rid of Microsoft's horrible usability in favour of its own which does the game a massive service indeed. No tricky unit or mission selections to be seen here, it's all very efficient and easy at the same time.

Each mission area and unit can be customised to your own tastes with their skin the subject of a colour or texture change as is the battleground you find yourself in. It's not a massive feature but one that allows you to make the game your own that little bit more.

With each foe that you dispatch, you acquire a certain amount of cubes from them which are used to create your units. The closer to their own base you kill off an incoming cube-head the greater the reward of dropped cubes and, as you would expect, the more powerful units cost more cubes to produce so it's well worth getting hold of as many as possible.

Periodically bonus packages will float down onto the arena which can be picked up by either side before it disappears which grant certain bonuses such as extra cubes or the allowance to deal added damage for a short duration. It's these that can break a tense stalemate between players as extra cubes means more units to push forwards with whilst bonus damage can deflect a stronger assault. The graphics here aren't world beating, drastically in-depth or detailed when it comes to textures and such but much like Fez and Minecraft the game has a simple yet charming appearance. The whole thing is clean and polished though so you never stop to think how things to could look better or what you would change given the opportunity.

There are times during the single player mode where you feel as if your skills aren't really being challenged and your enemy sticks to a strict pattern of movements after a short period. Rather than trying to flank you, they sometimes send out waves of men towards your tower in an attempt to overwhelm rather than outmaneuver. If you tend to play more multiplayer games then this won't be an issue but if you want to use this as your initial proving ground then it's likely that you will encounter a few losses early on when you get online.

With the difficulty and monotony issues there's also the problem that Cubemen may not hold your attention for that long with missions not hanging round for much longer than ten minutes in some cases. If you were hoping for a strategy game to get your teeth into then this is not the one for you, it's more like a title which is best for beginners to the genre. That by no means does that mean this is a bad game because it's not, you can only expect to enjoy this in 'light bites' and a game that will kill a few minutes rather than a couple of hours.

With a low price, it's easy to see the appeal that Cubemen 2 offers and as long as the appeal doesn't stretch further than seeking a game which will fill a few spare minutes here and there then that's fine. Strategy isn't tested as much here as battles can simply be won and lost with trial and error or one or more players simply losing interest or not paying 100% of their attention. If Cubemen 2 had a twist on the gameplay or offered something new then this would come with a higher recommendation but as it stands, pick this one up on your own judgement.