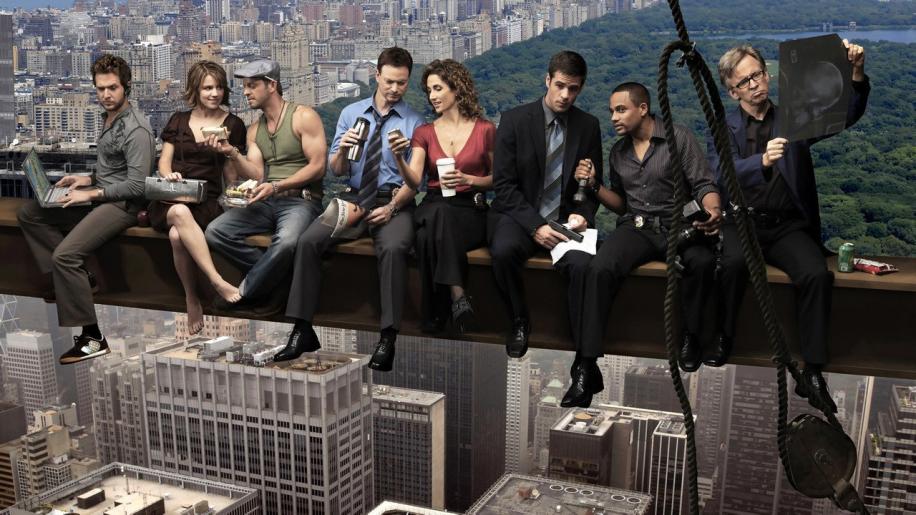 CSI:NY is presented in a polished 1.78:1 aspect ratio anamorphically enhanced widescreen transfer. In some shots the detail is generally excellent, with sporadic softness but no apparent edge enhancement. Unfortunately there is also often a noticeable amount of grain to the scenes, mainly because of the way the program has been shot. As already mentioned, it is a very dark show - New York in black and white - and when it is not in greyscale, we get a sort of sepia look to the whole affair. Either way, when these colour filters are used, a great deal of inherent grain appears (as you will notice in the Wild West Enterprise Season 3 episode that they employed similar visual filming techniques on). Still, the ever-important blacks are largely good and the series generally looks pretty fantastic on DVD. CSI: NY gets the deluxe treatment with a solid Dolby Digital 5.1 affair. The dialogue is perfectly clear, generally focussed on the frontal array, with plenty of screams and strange noises to bounce around the surrounds and no end of effects to offer up some directionality (not least during the frantic flashback sequences). This includes some great crowd and background noises that make you feel like you're right in the centre of the action. Easily the highlight of the audio treatment for this series comes from the absolutely fantastic soundtrack, which includes bands like Massive Attack and UNKLE featuring DJ Shadow, not to mention the excellent title track, Baba O'Riley, once again by The Who (who did the other CSI title tracks). It is the best of the three title tracks (although they are threatening to change it) and this is also the best soundtrack for any of the seasons of any of the CSI variations. The first Audio Commentary we get is on the pilot (crossover) episode, with Ann Donahue, the Executive Producer of CSI: Miami and Creator of CSI: NY. She is quite softly spoken and mellifluous, talking about how they wanted this crossover to be different (and darker) than the one from CSI to CSI: Miami and the various ideas for the episode. There are a few anecdotes and it is interesting to hear about how they purposefully made Miami look bright and vibrant to contrast with New York, which they wanted to look dark and grey and she talks about the one-liners that the characters are given (the 'buttons') which take a great deal of work (and still sound cheesy!). She praises David Caruso's character's connection with the victims and the actor himself for being a gentleman, also talking about how great it was to get Gary Sinise on board. It is easy listening, with just enough trivia to keep you involved for the duration. The other audio commentaries follow much the same pattern, only with different contributors. We get commentaries on the first, tenth and thirteenth episodes with Executive Producer Anthony Zuiker, Pam Veasey on episode three and writer Timothy J. Lea on episodes seven (partnered with writer Zachary Reiter) and twelve. Zuiker is particularly informative on the Officer Blue episode, where he discusses in great detail the politics of the potential horse fatality in the story (and how even Jerry Bruckheimer got involved in the decision-making process). The writers who commentate for the silly dog-show episode, Recycling, talk about the pressure to 'lighten up' the series and the contrived character developments for Mac with this story. All in all, it is a fair spread of decent commentaries, although perhaps more cast contributions and a commentary over the final episode would have been a good extra effort.

The Cast Examines the Characters is a very interesting fifteen-minute look at the various actors that they obtained to populate this crime drama. Starting with Gary Sinise (who they maintain was top of the list when blatantly they would have preferred Andy Garcia or Ray Liotta) they discuss the various characters and what motivates them (normally some kind of grief over personal loss). The producers and directors chip in about what they think - obviously all cringe worthy praise - but the soundbites from all of the main cast are much more interesting, with Sinise discussing his interaction with Melina Kanakaredes and Melina giving up a little anecdote about an improvisational kiss that was worked into an episode. Carmine Giovinazzo (Danny) talks about being the Don Corleone of CSI: NY and they even compare Aiden (Vanessa Ferlito) to Angelina Jolie, so this featurette clearly has no basis in reality, but it is still a fun, informative introduction to the different characters and the actors that play them.

The Science Behind the Scenes is a brief six-minute featurette that has interviews with the various technical advisors involved in this and the other CSI shows, along with the other cast and crew members talking about how essential it is to have the advisors on set. They discuss the accuracy of the episodes (it's a pity they didn't do a very good job on anything video related - you simply cannot zoom x 100 into a CCTV image without everything just turning into a blur!) and cite examples, with corresponding episode footage being shown. However it is nice to hear them talk about how if this were real it would all take a lot longer (the tests, the body examinations etc.) and admitting the writer's liberty they take with the whole project.

CSI: NY - Set Tour takes us on a nine-minute tour of the set, hosted by the production designer (who also worked on CSI: Miami). He wanders around the main CSI office, pointing out the labs, the lighting, Mac's office and the autopsy room. It is a little monotonously technical, but there are a few interesting comparison shots given to show how the original set (built for the crossover episode) was evolved into the set that is now used for the main series.

The World's Largest Crime Scene is a nine-minute featurette talking about how the series came into existence, with members of the cast and crew talking about this next development in the CSI franchise. They discuss the choice of the particular city, show some background footage of the crossover episode and talk about the way they depict New York. Even Jerry Bruckheimer himself pops up to offer his view of New York and the myriad stories it offers.

The Zoo Year looks at the animal incidents in the first season of CSI: New York, talking about the horses, rats, dogs and even the elephant involved in this season's story. They discuss the relevant episodes in detail, the issues raised over the value of an animal's life - especially since many of them were killed (at least in the story) for the furtherance of the investigative plot. They talk about lightening the series with a few 'silly' episodes (like the one about the dog show) and the difficulty with training animals for the show. For fans of the CSI series, CSI: New York simply presents more of the same - and should be distinctly pleasing as such. Even though it is probably the weakest of the shows, it is only in the early evolutionary stages (the first seasons of most shows are normally exploratory processes and this one is remarkably polished for a premiere) and - as I've stated - fans of the other CSIs will simply lap it up. If you like Sinise in particular, you might want to give it a shot. I have found that, as is the case for Kiefer Sutherland (24), David Caruso and William Petersen, the small screen is a great way to see more of some seriously underrated and underused actors doing what they do best. This season is presented with a slightly grainy, dark transfer (mainly due to the grim setting) and a superb soundtrack (the best of any of the CSIs), along with a nice assortment of extras. Those who have already seen the show and like it should already have this on pre-order and those who like the other CSI variations should definitely give this a try, you are unlikely to be disappointed.