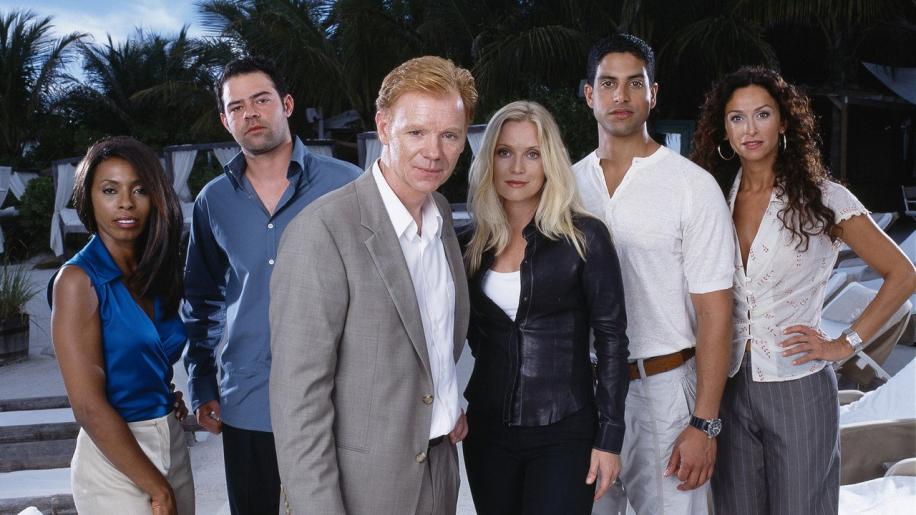 CSI Miami Season 3, like the previous seasons, looks very good. It has been fortunate enough to have always been presented in widescreen and this is no exception, with a 1.78:1 aspect ratio anamorphically enhanced widescreen transfer. The detail is generally good, with only some scenes exhibiting softness (generally the longer location shots look fabulous but the interior close-ups are a bit softer) and negligible edge enhancement. Grain is only really present in those integral 'CSI flashback' shots which are shot using a different style. The colour scheme is bright and luscious, as you would expect from the Miami locale, with bright blue skies, clear blue waters and lovely tanned honeys all over the place. The blacks are deep and solid and overall the transfer looks very good, certainly one of the best CSI presentations that I have come across. The soundtrack is a decent Dolby Digital 5.1 effort, which is fairly standard now for TV shows, including the CSI variations. The dialogue is always clear and coherent from the frontal array, with nice big effects (gunshots, plane crashes, explosions) and smaller ones (sirens, footsteps, computers busy whirring) both giving the surrounds a fair amount of work - despite the fact that there is, again, a distinct bias towards the front channels. The score varies from The Who's excellent title track to the moody melancholy background music to speedy techno beats, rock music and known artists, all sounding superb although a little bit more bass and rear work would have been a nice addition. This is effectively a glorified stereo mix, but still it never detracts from your enjoyment of the show itself. There is also a Spanish stereo dub if you so require. First up, we get a wealth of Audio Commentaries. The Season Premiere, Lost Son, has a commentary with the Supervising Producer (and writer of this episode) Elizabeth Devine. She talks about filming on location, how the (admittedly preposterous) big season starter crash was based on a real boating accident, the special effects used and how they got to collaborate with the real Miami Police for the show. We hear about the new opening credits, the problems with the weather (it was surprisingly temperamental) and how they dealt with the loss of a major cast character. It's an interesting commentary for the opening episode and, despite the frequent pauses, Devine makes quite a good commentator.

The third episode in the series, Under the Influence, has an audio commentary with Writers Marc Dube and Corey Miller, along with the Director of this episode, Scott Lautanen. They talk about how originally the story was going to be about a girl who was hit by a train, how they had to work in the new character in his episode (the foppish, irritating rookie Ryan) the real technology that they use in the depiction of the forensic investigation and the last-minute changes to the script and story. It is a much less engaging commentary, despite the fact that the information on offer is much more interesting - the depth of trivia that they have to offer about the series, the episode, the stories and the characters is bewildering, it's just a shame that the contributors are so monotonous and clinical.

Crime Wave, the eventful feature-length eighth episode in the series, is also given an audio commentary, with Writer Elizabeth Devine once again on hand to offer her insights, this time partnered with Director Karen Gaviola. They make for an interesting pair, talking about the terrible hurricane season in Florida at the time and how they got a great deal of real disaster footage to use for the episode, the research they did into tidal waves and how, a month after shooting, the real Tsunami hit. Although a little more background into the show would have been nice, this particular pairing is quite good and worth a listen, especially if you want to learn all you can about this episode itself.

The tenth episode, After the Fall, is given a commentary with two previous contributors - Writer Marc Dube and Director Scott Lautanen - along with another Writer, Ildy Modrovich. The introduction of the female angle into a previously boring pairing makes this slightly more engaging, offering up discussions on the original script ideas, the moments where you have to suspend disbelief, the cameo stars, more problems caused by the weather and the way they left the story open for a potential recurring character (hinted about to return in Season 4).

The twelfth episode (the mid-season actioner) Shootout, has a commentary with Writers Corey Miller and Sunil Nayar. They talk about the comparisons to E.R. which were inevitable considering the location, have a few too many in-jokes which only they fully get and generally take too many breaks to watch the action. Overall it is the worst commentary so far, although if you want to know more about this particular story then it may be worth dipping into.

Finally we get a commentary on the penultimate episode, Whacked, with Executive Producer (and Writer of this episode) Ann Donahue. She is quite a softly spoken commentator, but she offers up some interesting observations, including the cinematic editing and scoring of the opening sequence, the way they did the old newsreel footage, the need to keenly observe the details in this show and the different suggestions that they put into the series to affirm the Miami location (the bright contrast to the New York derivative). Whilst her more general comments about how great the crew is, or how good the actors are, come across as a little unnecessary, there is plenty of interesting trivia about improvisations, story concepts and character backgrounds to keep you involved. It is a good commentary to have, although I would have preferred one for the final episode which ties up so many of the important story arcs (and introduces a wealth of new ones).

All of the other extras are on the seventh disc. Delivering the Goods is a thirteen-minute Featurette examining the stories across this particular season. There are far too many clips from the episodes themselves to pad out the running time, but there are also a few interesting interjections from members of the crew, discussing the pivotal moments during this season. David Caruso himself pops up to offer his view of some of the strong storylines (particularly the loss of one key character), along with most of the rest of the team members. This is an interesting Featurette, focussing on the feature-length episode, the fire-in-the-Everglades episode and briefly on the season finale. It is just a shame that they do nothing more than hint at what might be happening in the next season.

Visualising Season 3 is a twelve-minute Featurette on the special effects used for the various episodes, dissecting the bridge collapse, the plane crash and the various explosions they had (including the excellent building demolition). Various crew members discuss how they achieve the shots that the script dictates, splitting the effects between what they can do in reality and what they need CGI for. Fans of the more technical side of the show will be interested to see how it all comes together.

Coast to Coast is an eleven minute featurette that looks at filming on location in Miami and how they try and make it look as much like Miami as possible, even when they have to film in LA. The featurette soon drifts into the more technical side of it, crossing over into the realm of the previous effects featurette because many of the shots done with LA backgrounds had to have effects to remove these. Another technical but informative offering.

Deep Blue Sea is a nine-minute look at the open water work that is done for the show, which the crew profess as being the most technically challenging aspect of the series. They talk about the problems with filming (the boat swaying and so forth), getting David Caruso to go into a swamp (which he was apparently happy to do) and how they try and get water into many of the scenes in order to establish the location. Like the other featurettes, there is plenty of behind the scenes footage but a few too many final film clips and those who love the show may be interested to give it a look.

Finally we get an eight-part featurette entitled Medical Examiner School. Totalling only thirteen minutes (so each segment is little over a minute in length) it looks into the crime scene process, autopsies, gunshot wounds, blunt force trauma, toxicology, stabbings and asphyxiation. The medical consultant talks (as if reading from a script) about the world of a Medical Examiner, the procedure, the jurisdiction and the processing. Despite the wealth of information here (although it could have done with being a little longer) the guy talking you through it is so monotonous that you find it hard not to get bored. I think even a text variation of this would have been better than having to listen to this guy, but as it is there is still a great deal of valuable factual background information into real M.E. work here and it is the documentary that is most worth your time. CSI: Miami is my favourite of the CSI spin-offs and as good as the original CSI, but for different reasons. David Caruso is clearly the star, but if you don't appreciate his acting or his character, you're unlikely to find this show as enjoyable as it can be. For me, it's great to have him back in such a prominent position after NYPD Blue, plus the action-orientated glossy world of Miami makes for a thoroughly enjoyable series. Here we once again get solid anamorphic presentation and six-speaker surround sound coverage, along with a selection of commentaries and featurettes that should keep fans busy for quite a while. Those who like CSI: Miami should already have this set on order, but follows of CSI who have not given this variation a shot (or even those who have never tried any of the CSI shows) should check it out to see whether they enjoy it. I personally never miss an episode.