Man? Machine? Or simply a weapon? 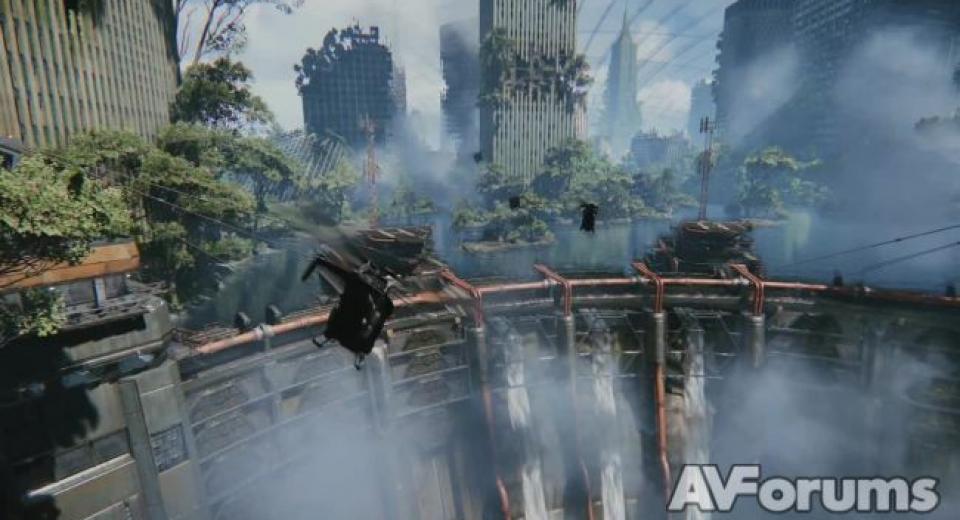 Hands up if you grew up watching 80's cartoon The Centurions, no? How about the 1984 Transformers movie where Spike gets an exosuit? Still nothing? Iron Man then, everyone knows that particular man meets machine Hollywood blockbuster. While the US pours resources into developing some real world powered exoskeletons, the closest most of us will ever to get to wielding that kind of power is through our favourite video game genre the first person shooter, thankfully Crytek are way ahead of us and have been producing just that since the first Crysis in 2007.

First things first, Crysis and the Cry Engine which powers it have always been at the forefront of the graphical arms race. While the consoles were just getting into the stride of the current generation, Crysis was busy draining the CPU cycles and wallets of PC gamers everywhere who were trying to max out the visuals which were beyond almost all of its competitors at the time. The rest of the industry may have caught up somewhat and although it's a lot harder to impress with visuals these days, Crysis 3 certainly succeeds more than most. The console versions make some liberal use of motion blur but the rest of the package including lighting, animation and particle effects are all simply beautiful. Usually such beauty is created by relying heavily on linear scripted gameplay to make the most of the ageing resources on offer; Crysis 3 does a lot of this but frequently opens up into some mini sandboxes of sorts where you are left to explore and find alternative paths and objectives which makes the graphical achievements even more impressive.

As our protagonist is fond of telling us "They call me Prophet"; but his name is actually Laurence Barnes. Scratch that; technically he is a Marine known as "Alcatraz" who not only donned the last remaining swanky nanosuit, but also assimilated all the knowledge, experiences and personality of its previous owner Mr Barnes. Just to complete the identity fraud he also helped himself to the "Prophet" call sign. My experiences with the series before now have been few, I recall being blinded by videos of the original game and sulking that my PC didn't have a chance of running it. In 2011 the consoles caught up and received both the original game and the shiny new Crysis 2 so that we can all now, regardless of platform, delight as Crytek pile on another layer of graphical shine and put a bow on the series with Crysis 3.

It was with disappointment then that I charged into battle to find the alien enemy largely defeated. I was tasked with taking down CELL, a shady corporation who had stepped into the power vacuum after a gruelling alien invasion; which it turns out isn't as over as you first thought. This puts us in some very familiar territory, minus the alien enemies  (which only appear briefly) Crysis 3 has to work hard to pull itself above the crowd. Thankfully the nanosuit helps with this, with several modes: Armour, Cloak and Strength all doing what they say on the tin and offering up some gameplay options.

The nanosuit relies on power which you can channel into any one of the abilities at any given time, they balance it out by having the powers drain the energy at different rates before eventually depleting and recharging. So if you want you can activate the cloak and sneak through to your objective or hit maximum armour and go in guns blazing. Most will likely rely on a combination of the two resorting to bullets once they have been discovered or run out of the arrows from the borderline game breaking Predator Bow which, unlike every other weapon in the game, maintains your cloak while firing. Weaponry in the game is (save for some electrified bullets here and there) largely status quo for your modern shooter. Your standard pistol, SMGs and assault rifles exist but some inspiration is present taking cues from future technology with weapons like the Typhoon: an SMG which is based on products from the Australian R&D company Metal Storm. They develop electronic weapons that boast ridiculous fire rates upwards of 1 million rounds per minute. Which makes the Typhoon a very fun weapon to use and one I would make a beeline for whenever the opportunity arose. Not everyone is as obsessed by weapons as I am but more inspiration from such future technology would have been nice. There are also several weapons from the fictional Ceph race, usually energy based and largely equivalent to a real world counterpart with some neat animations and effects thrown in for good measure.

All the weapons do a good job of making Crysis 3 feel like a competent shooter; unlike the character movement which takes some time getting used to (intentionally increased speed and agility from the suit I expect) the weapons handle and sound satisfyingly weighty. They can all be modified on the fly with the click of a button allowing you to adjust scopes, attachments and fire modes easily right there in game. Aside from the occasional boss or large enemy you might take an explosive weapon to, there really is no incentive to use anything but the bow; as long as you are careful to collect arrows and manage your energy to maintain your cloak you need never use anything else. The campaign will keep youy busy for around 6-8 hours depending on how many side objectives you partake in or how lucky you are with performance issues. Personally I was unable to complete the campaign as despite all efforts the game consistently froze in the last moments of the final boss fight. Google confirms such issues plague every platform with players not just experiencing issues at the exact same point but throughout the entire experience.This taints what has the potential to be a decent campaign, reading the ending confirms I would enjoy it; it's just a pity I'll never play it.

Multiplayer comes complete with all the standard fittings, customisable classes, ranking up and all the modes you would expect. Amongst a few notable deviations is Hunter mode where Hunters with nanosuits and infinite stealth hunt the other players who are CELL operatives. When killed, CELL players become Hunters and join the other side. The nano suit does provide some flavour to the remaining collection of modes which fall into familiar formats, whether people will enjoy the gameplay changes the nanosuit brings is another matter. Stealth dominates the gameplay, with the stealth plus shotgun load out leading to some abrupt and instant frustration for new players. Similarly the Predator Bow, which only becomes available after levelling up and "rebooting" your suit, continues to allow players to maintain stealth while firing making every corner a potentially controller throwing experience.

In the end Crysis 3's multiplayer boils down to "if you can't beat 'em join 'em", stealth is an inherent part of the gameplay you have to come to terms with and adjust to; mechanically the gameplay is fun when you use your powers correctly and the maps are varied and designed with multiple routes allowing for creative use of powers. If you embrace the nanosuit there is fun to be had, just be prepared for a particularly rage inducing hazing at the hands of invisible Predators before you can join the ranks. Crysis 3  impresses on several fronts with a decent narrative and eye candy round every corner yet it's hard not to malign the missed opportunities. The moments where the game leans towards an almost open world style of gameplay inspires creativity and exploration; only to be diluted by standard linear hand holding. Multiplayer allows the players to retain all the powers the suit endows however feels frustrating when those powers are further enhanced by the levelling up system, allowing players to widen the skill advantage even further. Add in the possibility of potentially game breaking bugs and the elements which genuinely make Crysis 3 stand out can't stop it from fading away into the crowd