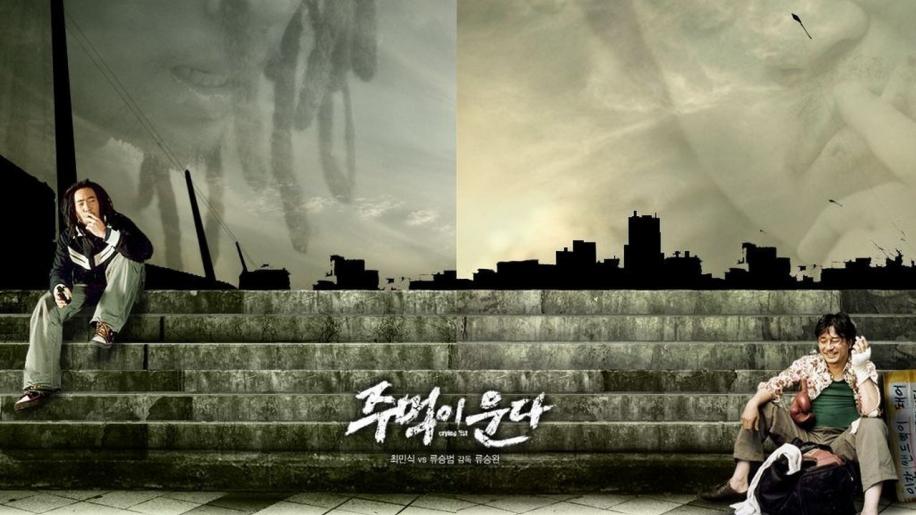 It's been a while since I saw Rocky, and I have never seen Raging Bull. So, not too hot on the old boxing movies, then! What I can say is that Crying Fist, or Jumeogi unda to give the movie its Korean name, is a damn fine movie, and not just because of the boxing.
Gang Tae-shik (Min-sik Choi of Oldboy fame) is a burnt out old ex-silver medallist boxer of forty years who beats his wife, finds himself without money and a son who thinks his father isn't exactly the brightest bauble on the Christmas tree. On a lighter note, Yoo Sang-hwan (Ryu Seung-beom apparently the director's brother) is a n'er-do-well who roughs up folk for money, ignores his family, has no real friends other than hanger's on and is wanted by the police.

So, neither of these characters are shining beacons of honour and gratitude, leaping to the aid of Greenpeace, righting wrongs and helping old ladies across the road. Oh no. These two characters are the dregs of society, the lowest of the low and Crying Fist thinks these people are redeemable enough to be our protagonists and follows their attempt to garner some of that self esteem and honour they have thus far lacked. Gang Tae-shik decides that life isn't really worth the hassle of staying at home and moves out. To make a living, he offers himself as a human punch bag so that people can take their stress out on him. He becomes a big success, and befriends the cafe owner opposite where he holds his brutal counselling. Yoo Sang-hwan after trying to get some money quick is caught by the police after beating an old, generous and caring, man unconscious in an underground car park. Rather than a normal prison, he is taken to a boxing academy run within a prison regime. Here, Yoo Sang-hwan finds himself the lesser of greater thugs which makes him even more depressed. He becomes determined to make something of himself, and repent for sins later on in the movie by winning the Everlast boxing championships.

Crying Fist is the most English Korean movie that I have seen. Often parochial, in an oriental sense, Crying Fist has more than a little Full Monty in the whole feel of the movie. Look to the way in which the older generation talk to their children in that rough yet caring manner. That Gang Tae-shik's son thinks his father is a looser and is ashamed of him or the “just getting by” circumstances of the characters that saturates the whole story in a very dogged, tenacious atmosphere. While this may paint Crying fist is as a mildly depressing movie, it is interspersed with comic moments that had me laughing out loud. Min-sik Choi in particular has a very naturalistic approach to the more comedic elements which lifts the melancholy of the Yoo Sang-hwan story.

I suppose that the Yoo Sang-hwan half is the most conventional, being as it is, a blend of Rocky and (the underrated, I may add) Girlfight. The director's brother puts in a good performance as a surely brat you'd like to see locked up, which is where the problem comes in to play. Crying Fist isn't, broadly, a surprising movie, so when we are asked to identify with Yoo Sang-hwan's new found sense of humility, the movie nearly stalls. We are expected to believe Yoo Sang-hwan, trained through the fine arts of getting utterly beaten every day in a boxing ring, becomes a better person. It's almost as if the bridge between the prison and getting Yoo Sang-hwan into a boxing ring was considered immaterial, so sudden is the transition. I didn't want Yoo Sang-hwan to leave the prison - he irritated me with his care free disregard of his elders and mercenary tendencies. He was no loveable rouge, but a spoilt brat that deserved a seven foot, twenty stone inmate called Brenda who really wasn't bothered who he slept with as long as they liked it rough. To the boxing ring he goes, however, due to the dual storylines, there is no gentle development. Instead a rather steep fall off an emotional cliff. This works in that there is some payoff when the director deems it necessary, but I was left to wonder if the realism of the rest of the movie's characters was put on hold while Yoo Sang-hwan has his emotional epiphany.

I must admit that the direction is superb, a montage towards the latter part of the movie is worthy of a special mention so well is it handled. Another standout is the fight scenes which really do look like they are punching one another. The realism is compounded by longer than usual cuts allowing us to see the violence and spirit in full flow. Choi Min-sik in particular, as he is an older person, has a turn of speed almost beyond imagining. There is a scene where he is beating up an old nemesis and Choi Min-sik slaps him twice. Now, if it weren't for the dual sounds I would only have counted one slap. It almost makes me regret giving up on those Karate lessons when I was younger...

So, should you get this movie? I would say, yes, if you can last it out. The most obvious drawback of the two story premise is that there needs to be more time allocated to each to make the movie worthwhile. In doing so, Crying Fist is a whopping two and a quarter hours long, which may put people off.