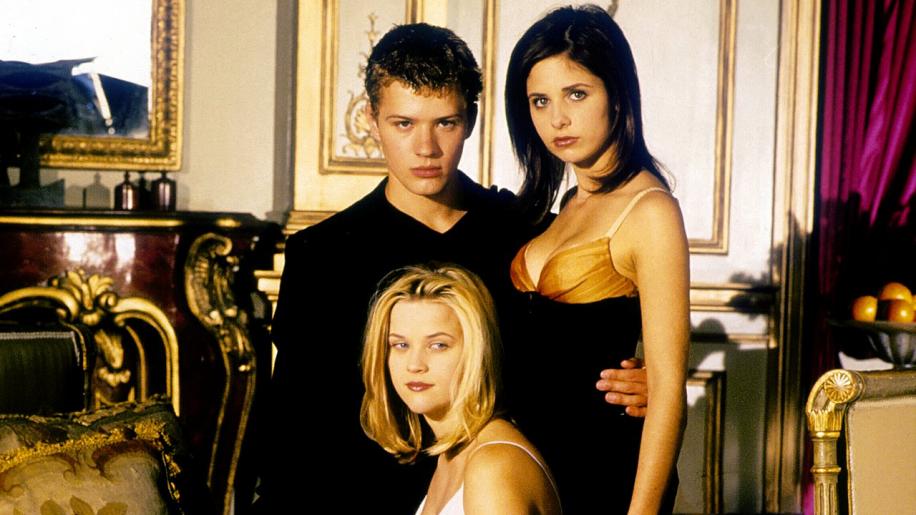 I am not a great fan of remakes. Recently I saw the French thriller 36, starring Daniel Auteil and Gerard Depardieu. Pitched as the French equivalent of Michael Mann's crime epic Heat, starring DeNiro and Pacino, 36 did not live up to expectations, and yet Hollywood - in their infinite wisdom - appear keen on now remaking it with none other than DeNiro himself. The irony is not lost on me. But every once in a while a remake comes along that so utterly changes the format of the original that it works as a movie in its own right. The Ethan Hawke/DeNiro version of Great Expectations springs to mind, as does DePalma's seminal Scarface, and the Leone/Eastwood take on Yojimbo, A Fistful of Dollars. And of course Ocean's Eleven, which took a flimsy, farcical original and injected it with lashings of style and wit. The list of superior remakes is much shorter than the list of pointless remakes, and the list itself is populated by many different incarnations based on the French novel, Les Liaisons Dangereuses. Amidst the many TV and theatrical movies, the most memorable is probably Dangerous Liaisons itself, with an all-star cast including John Malkovich and Glenn Close. A period-set story, the tale it told - much like Shakespeare - was strong enough to stand updating to a modern setting. And so we have Cruel Intentions.

For rich twenty-something socialite Sebastian, love is nothing more than a stupid mistake that only those inexperienced at playing the relationship game will let themselves succumb to. For him, it's all about conquest, seducing and bedding the most challenging targets he can find. His step-sister Kathryn has a similar sort of twisted perception when it comes to relationships, only she is one level up - her satisfaction comes not from seduction but from manipulating others. She poses the most alluring target for Sebastian - the one person who refuses his attentions - so when she offers herself to him as a prize in a challenge, he cannot help but accept. The challenge: to seduce and deflower the Headmaster's beautiful virgin daughter, Annette. But can these two master players continue to avoid the one thing that would destroy all their fun - love?

It could have been just another teen drama, a cheesy movie with caricatured players and a Hollyoaks-style demeanour, but Cruel Intentions manages to remain remarkably adult for a movie mostly populated by twenty-something lightweight performers. Kathryn, who was previously embodied by the (in my opinion) highly unappealing Glenn Close, is brought to life here by Buffy the Vampire Slayer's very own Sarah Michelle Gellar. She may not have the same acting class, but she oozes sex appeal, and that's pretty much all she needs to convince in this role. It is a shame really that she has failed to impress since her years as Buffy, because roles would surely have better suited her than the numerous horrors that she has since populated. Opposite her as the group's very own Don Juan, Sebastian, is the talented young actor Ryan Phillippe. He has shown remarkable talent in some of his movies - not least the superior modern-day-western, Way of the Gun, where he held his own opposite the masterful Benicio Del Toro. I think it's a great shame that he has so often been relegated to b-movies or straight-to-DVD efforts and here you can see that, even early on, he showed a great deal of promise.

Rounding off the cast we have a young Reese Witherspoon, who graduated through some pretty flimsy parts in movies like Legally Blonde and Sweet Home Alabama, to go on to do the marked improvement, Vanity Fair. I find her often irresistible, even in some of her more cheesy movies, and here in the role of the virgin Annette, she has a sweet warmth and innocence that could surely melt even the coldest heart. There's also Selma Blair, of Hellboy fame. She plays one of Kathryn's victims, the ludicrously naive and susceptible Cecile, who you have absolutely no sympathy for. Blair does dumb well (she was also in Legally Blonde) but it's good to see - in movies like Hellboy - that she has a little more to offer. There are also early performances from the likes of Dawson's Creek's Joshua Jackson, Resident Evil's Eric Mabius and American Pie's Tara Reid.

This is not heavy, deep material, but it is a marked improvement over your standard teen flicks, upping the ante with dark undertones and a rather bleak outlook on relationships in general. It's also packed full of some truly sexy moments, without the need for a great deal of clothes-shedding: mostly thanks to Sarah Michelle Gellar's hot seductress, whose moments with both Sebastian and - in one memorable kissing scene - with Selma Blair's Cecile, are particularly sizzling. Never allowing itself to be dampened by the potentially sickly-sweet romantic side of this tale, Cruel Intentions remains quite an adult affair, right up until the bittersweet ending that surely hammers home the point that this is not your standard run-of-the-mill Hollywood tosh. Kudos to all involved for coming together to update this period drama to a modern setting and creating something that is like a more fantastical teen-relationship-oriented precursor to the recent Closer. A superior remake.

“I'm the one person you can't have and it kills you.”